This is the first post in a series about my trip to Inti Fest 2013 in Peru.

For the last two years, my friend Diego has been trying to convince me to come to Asia Beach in Peru for the largest music festival in that country.  He is the type of guy that when he says “Trust me, it will be an amazing time”, he really means it.  As a festival that is described as “an ecological and cultural electronic music festival that celebrates music, appreciation of Peruvian culture and the environment,” it certainly sounded interesting.  Plus being able to get some of the best ceviche in the world while I was there didn’t hurt! I have been to Peru twice before and had explored Lima and Machu Picchu, but had never made it to the Asia Beach area one hour south of Lima where my friends from Miami claimed the great beach parties were. The DJ lineup for this festival was pretty nice as well.

But as those who know me would say, I only like doing things when I get a deal so when I looked around at the Wandering Aramean’s page to compare different frequent flyer options I saw that one of my favorites, British Airways was the best choice with a rate of 50,000 Avios points for business class.  Since it is almost a 5+ hour flight from Miami, I definitely wanted business class if possible.  United Airlines was a hefty 20,000 miles more so I wanted to get the flight with Avios if possible.  Remember that you can book using Avios on any Oneworld carrier which means that I could use them for American Airlines and LAN Peru flights, both of which service this route.

The problem was, as happens often, was that there was no availability when I went to book around a month before!  However, I know if you can be flexible, the airlines often release more frequent flyer seats when it gets close to the travel dates.  It is better to put a frequent flyer in a seat than have it go empty. So I actually thought I wasn’t going to be able to go, but I kept checking periodically to see if they released any seats.  Low and behold, as I checked a week before the festival, I saw a bunch of seats pop up.  But the only ones that worked to attend the festival were leaving a little bit earlier than I had planned, just three days from when I saw them! But if you have some flexibility then these last minute trips can be some of the most rewarding.  When I checked on British Airways site, this is what I found! 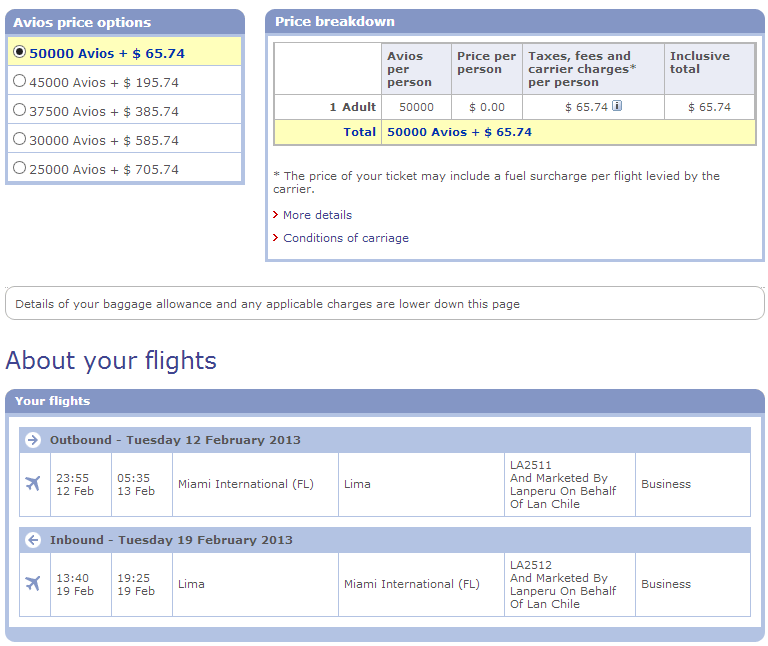 So for 50,000 Avios Points plus $65, I was on my way! I still had a few Avios left over from my 100,000 Visa I got with them, but transferred some from the 264,000 I got into my Ultimate Rewards Sears shopping adventure. And just like that, I was booked!  Awesome music, great ceviche, seeing a part of Peru I have never seen before, and spending time with friends: what can be better than that?