This is the eighth post in a series about my 2013 trip to Ireland, Scotland and Great Britain. Part of the free plane tickets were funded by the 40,000 point sign up bonus of the Chase Sapphire Preferred card.

After a long flight, a full day in Brussels, and another two flights we were happy to pay for a taxi from the airport to The Morrison, a Doubletree by Hilton Hotel. Dublin is a very expensive city to stay but since we only had two days scheduled I wanted to have something centrally located where we could walk if we wanted to.  As soon as we walked in, I knew we made the right choice.  It had a very chic and modern lobby. 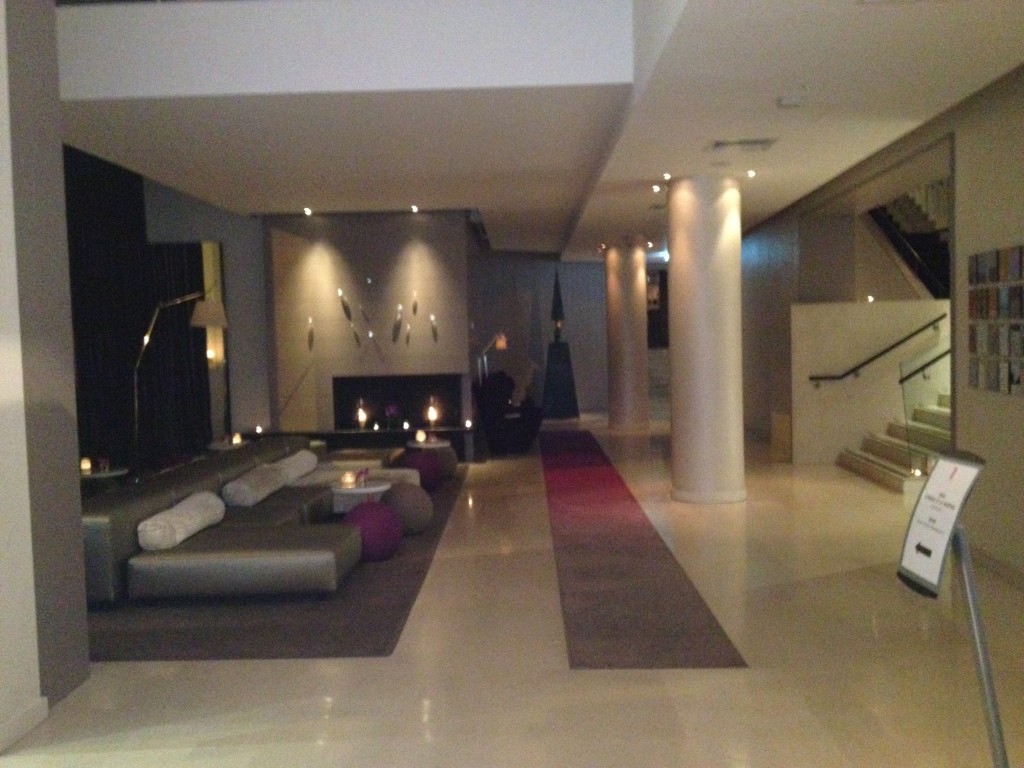 Initially they had given us an upgraded room due to my Gold HHonors status, but it had an interior courtyard view which was pretty horrible.  So one of my rules, especially when you have status with a hotel chain is “Don’t be afraid to complain!” You have worked hard to get this status (although I work smarter not harder), so it is not unexpected for you to expect a high level of service and upgrades.  I went back and forth with the manager for a bit and he told me the only room he had with a view of the River Liffey was a suite with a King size bed but he would have to get an extra 50 Euro a night.  I did my best to drop the words “gold status” as many times as I could in a few sentences and eventually I think he just gave up and said I could have it for the same rate.  Score! (I forgot to take a pic, but this is a similar one I found) 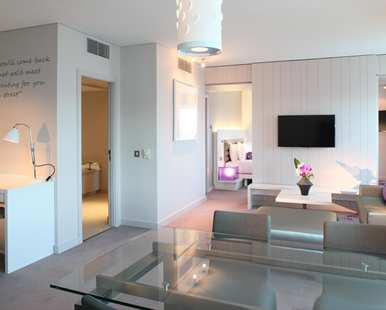 Here was our view! 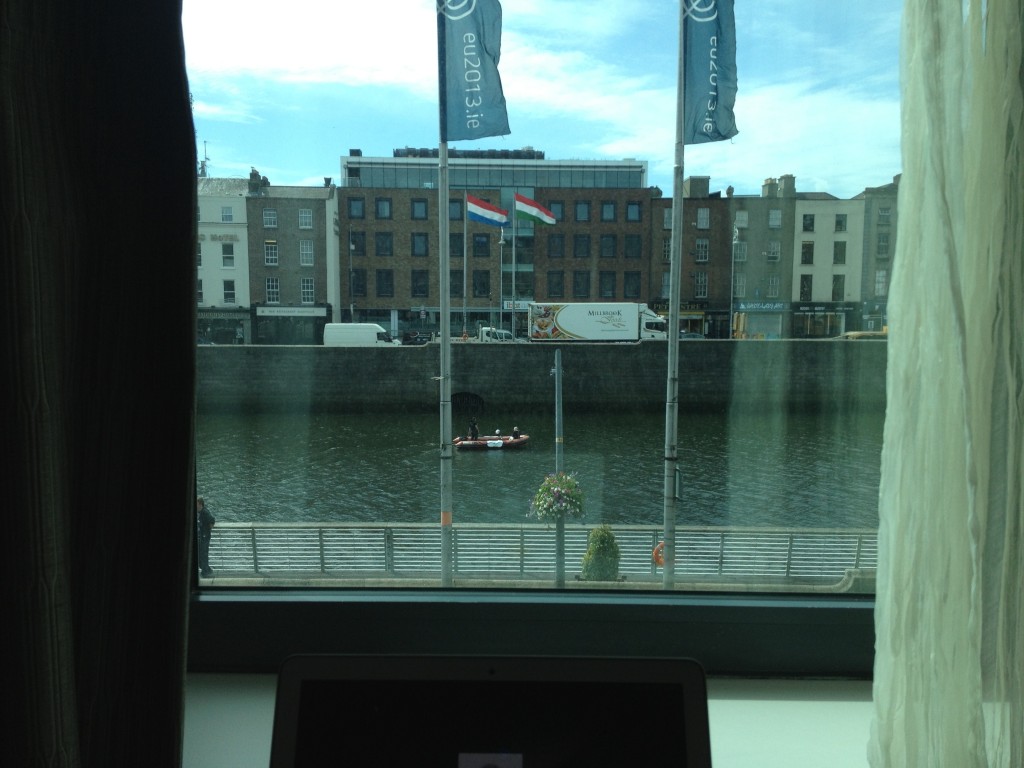 We had a lot to see so we woke up early and took advantage of the complimentary breakfast (love my gold status!) which ended up being probably my favorite breakfast of the whole trip! Homemade fruit and yogurt in these old style jars. 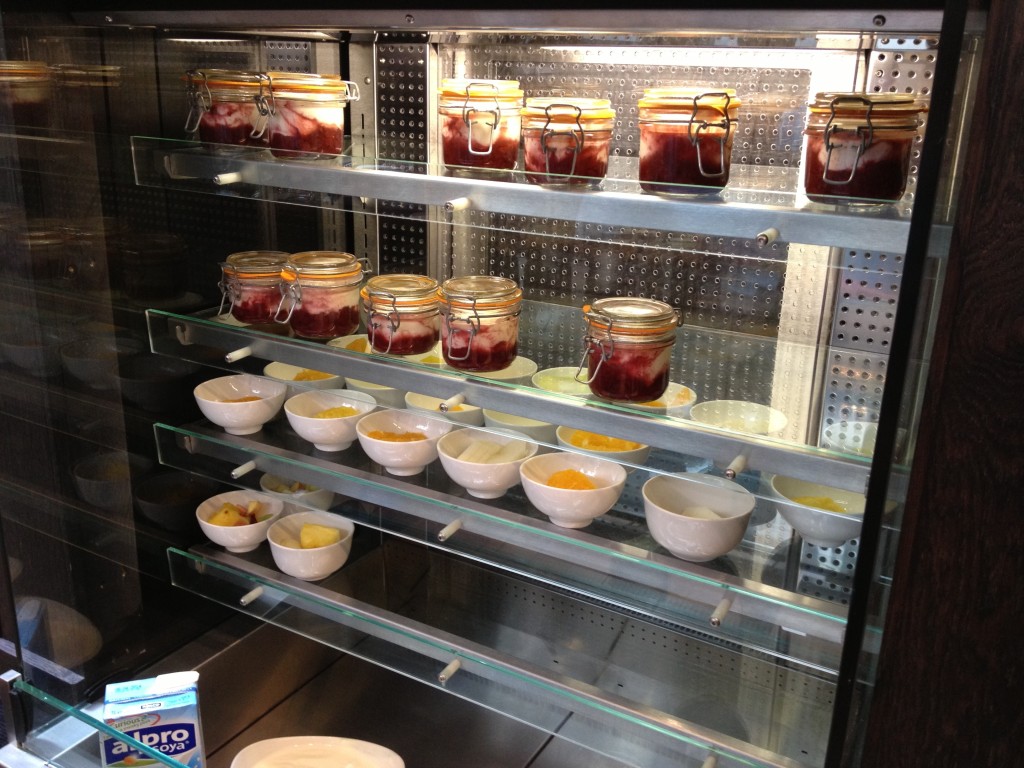 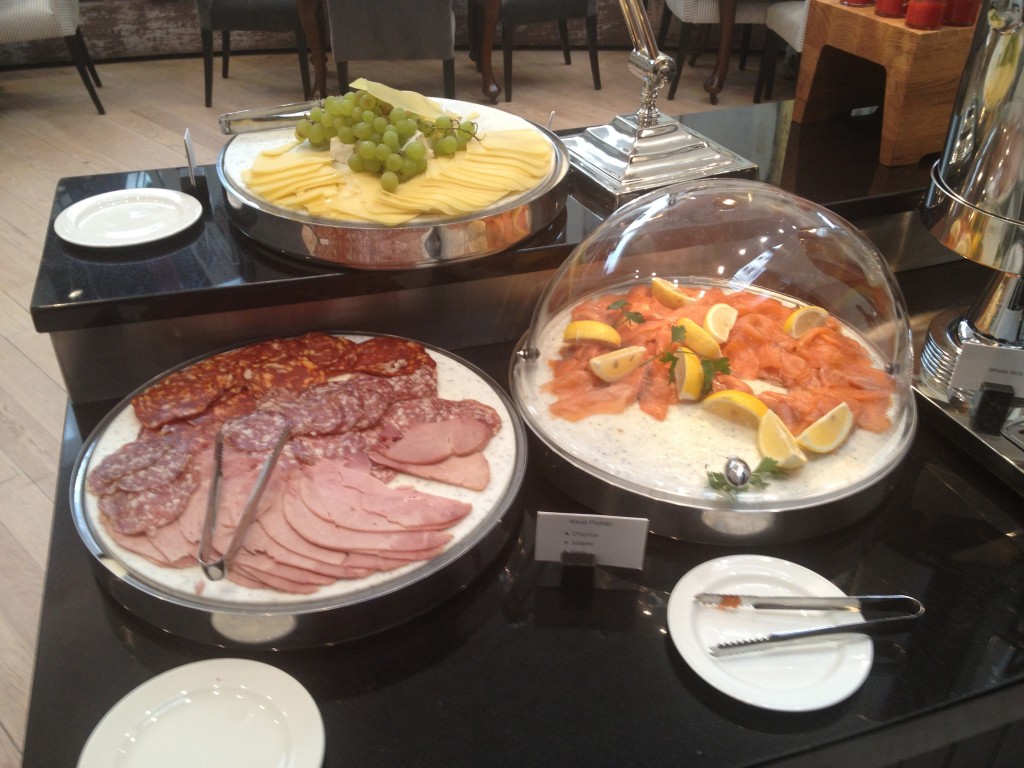 They would also cook to order a whole list of hot dishes such as the eggs benedict I had. 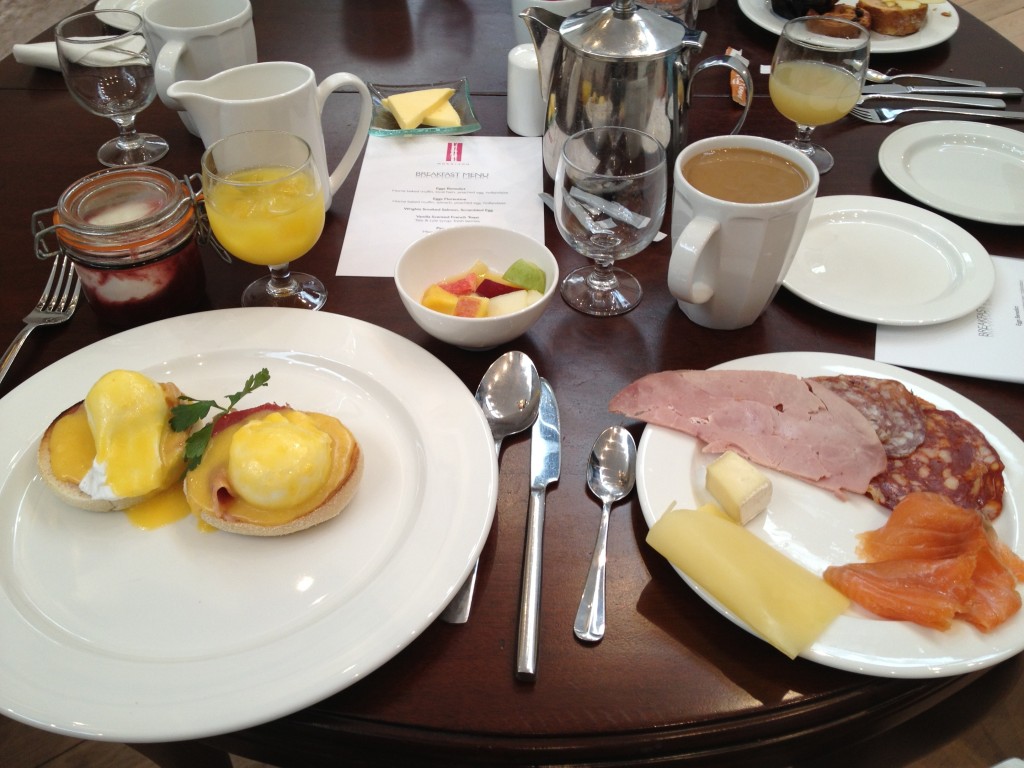 It was sooooo good!  The whole breakfast room had this trippy Alice in Wonderland theme to it that I really liked too. 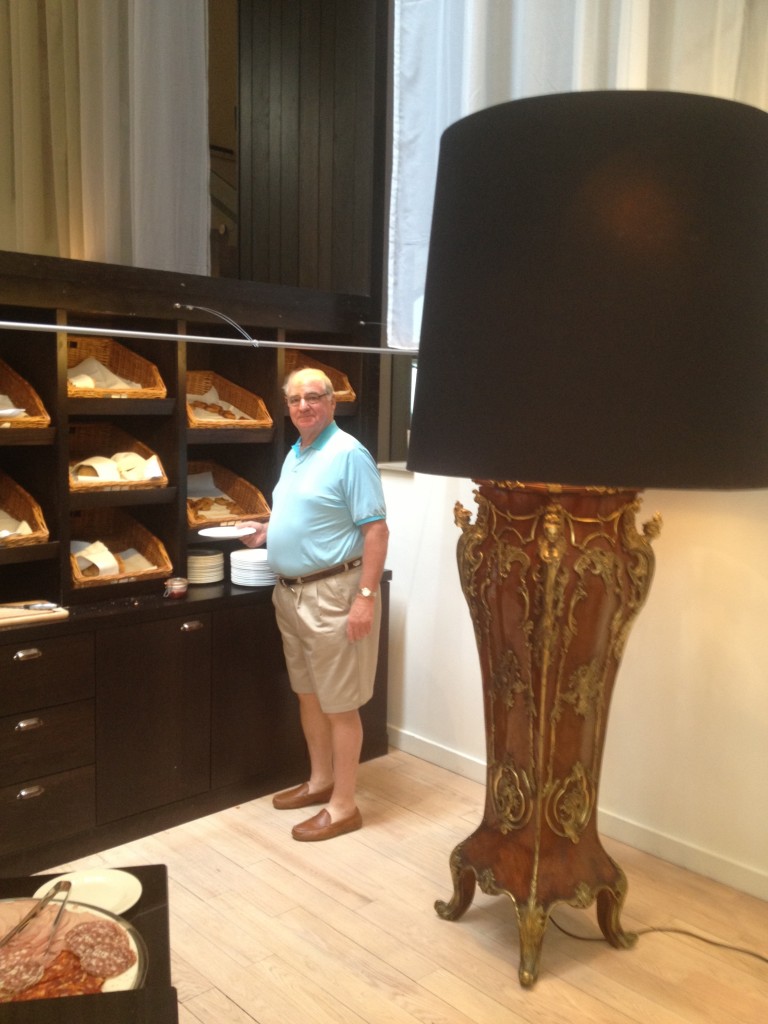 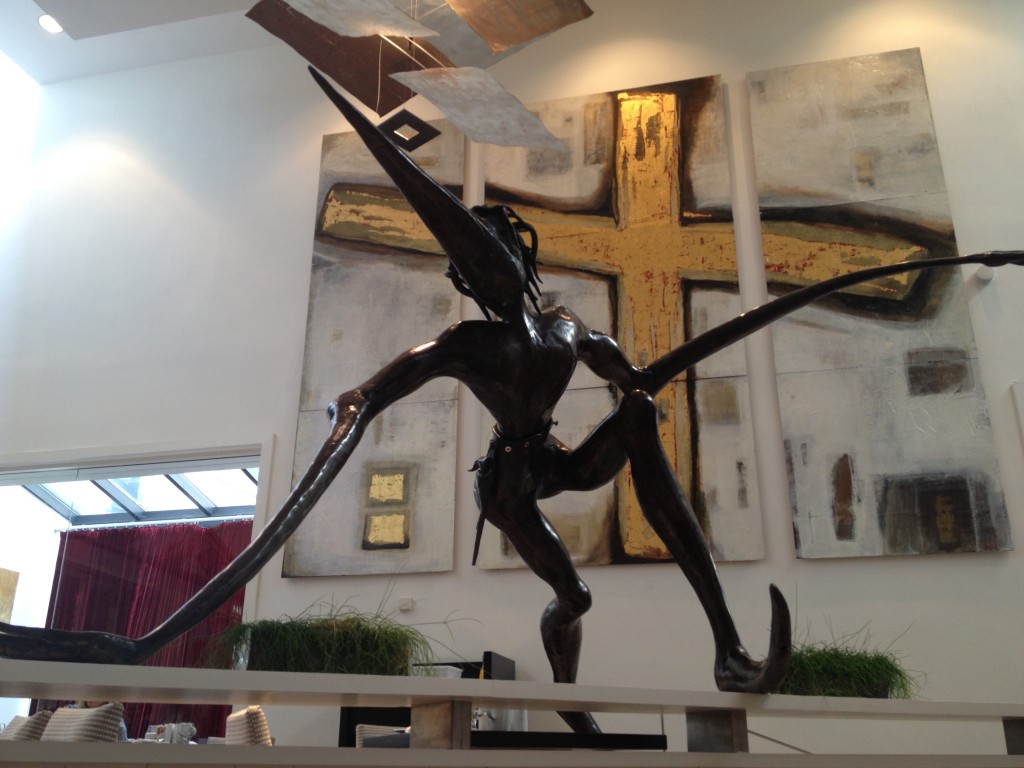 With the help of the front desk, we headed to a nearby pedestrian mall and got SIM cards for our phones.  10E each with enough data for the whole time we were in Ireland! Since we had limited time, I thought one of those hop on hop off buses would be a good way to see all the main sites and hop off when we found one that interested us.  We paid 29 Euro total and got a 15% discount by buying them online that morning.  It took a while for the bus to come around because they had a breakdown they told us, but we were soon tooling around Dublin with cheekily named sights such as Knobs and Knockers 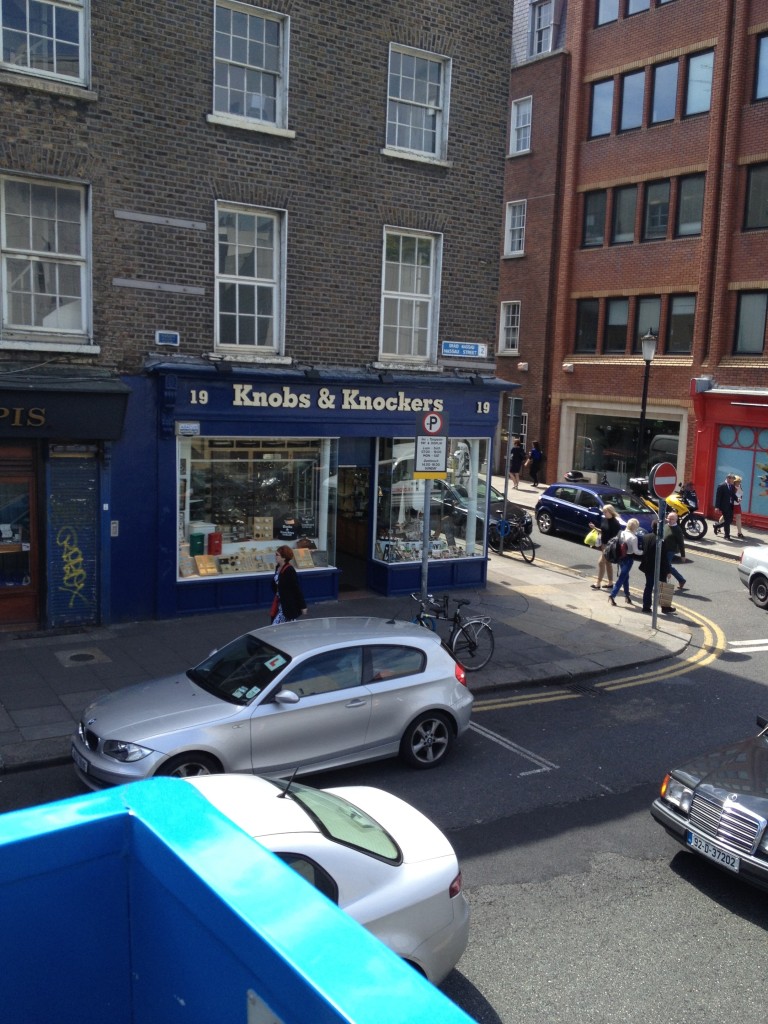 We stopped for a bit and picked up some beers for the ride which may or may not have been a good idea.  Remind me to tell you the story how I the bus left with my Dad on it while I getting the beers (oh the memories!) 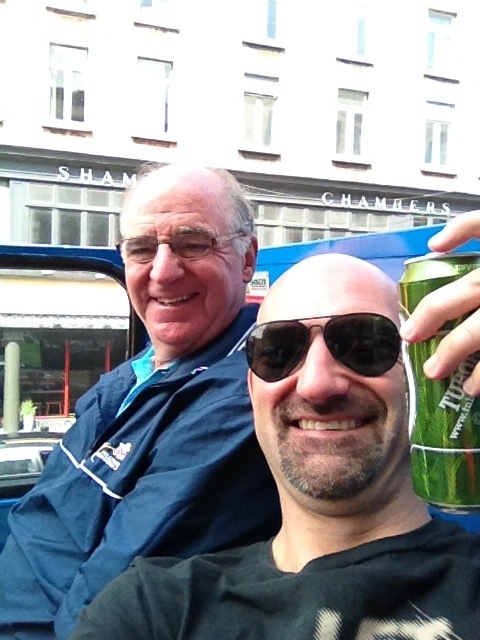 Now I had always thought that Butler’s had come from England, and it turns out that we are really Irish! 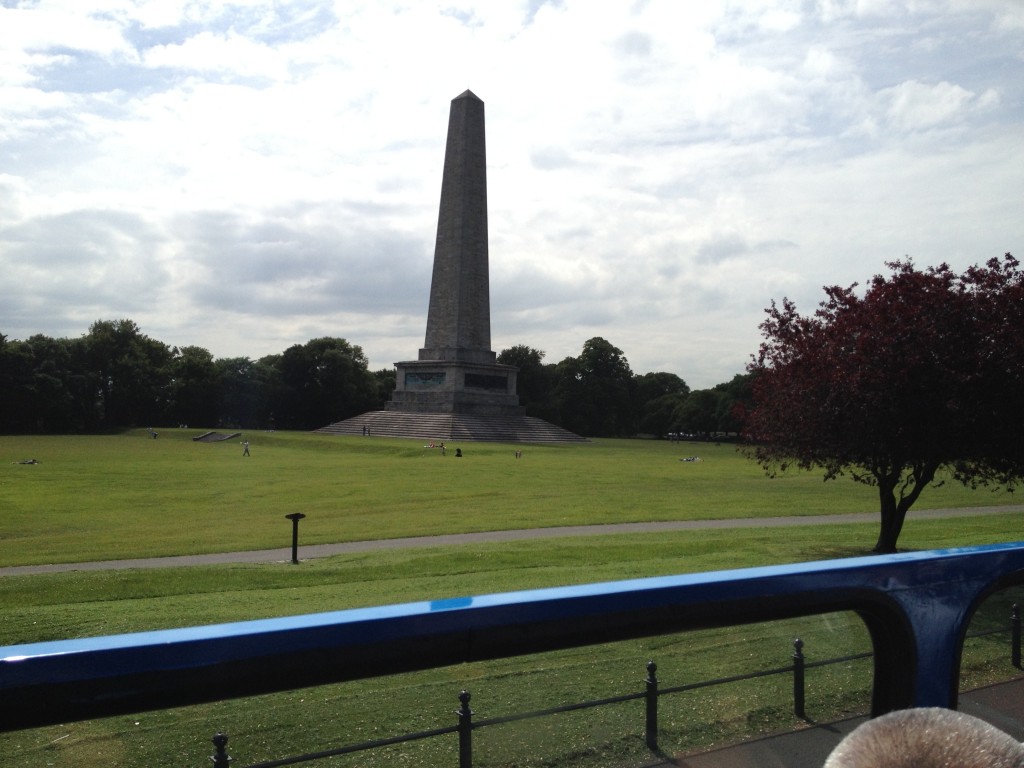 Phoenix park in Dublin was actually founded by James Butler the first Duke of Ormonde.  This ended up being a very important name in Irish history. We didn’t have time to go into the Jameson Distillery, but saw where it was. 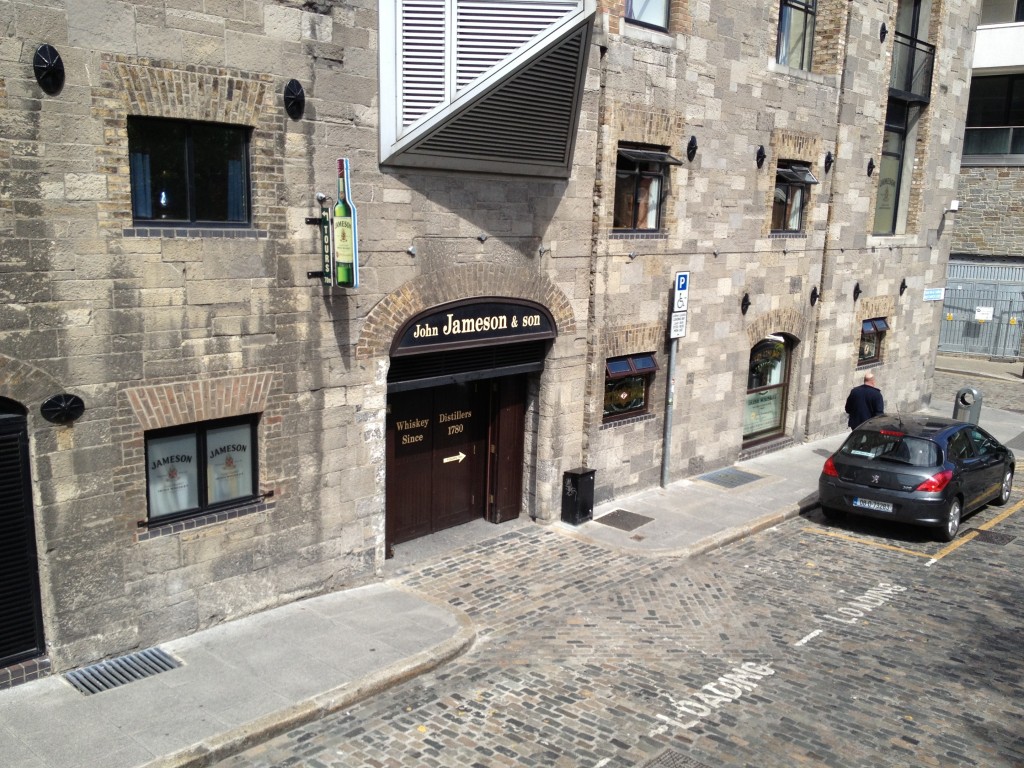 We saw St. Patrick’s Cathedral where an important standoff in the Butler-Fitzgerald dispute played out. 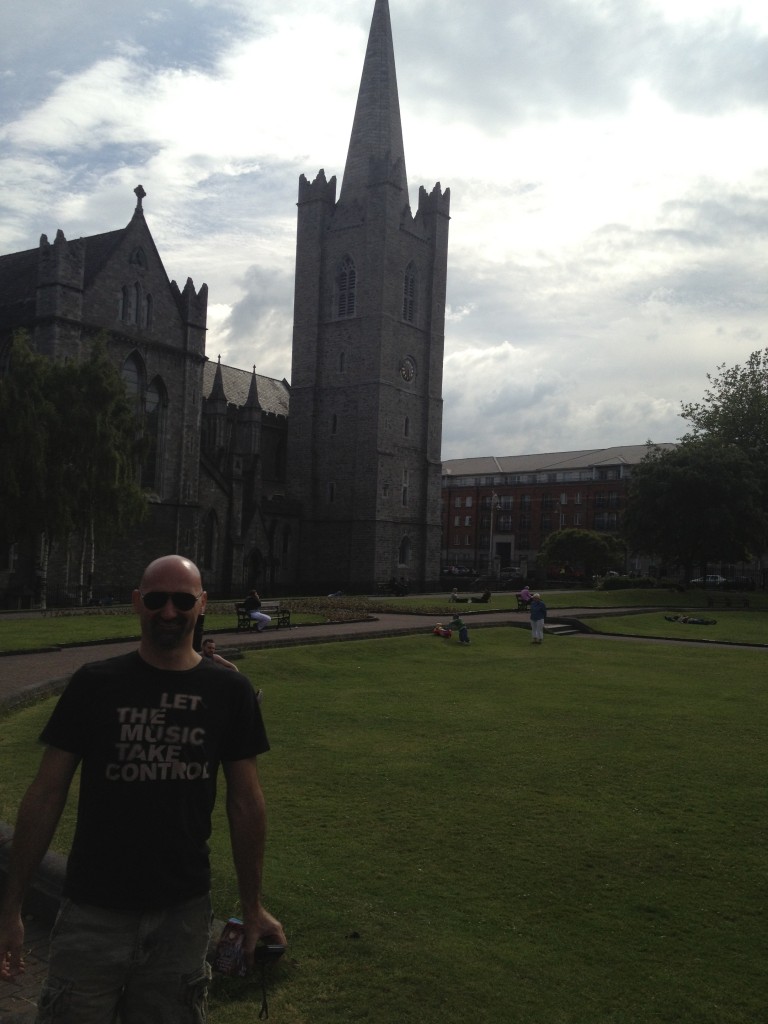 Christchuch was very impressive as well 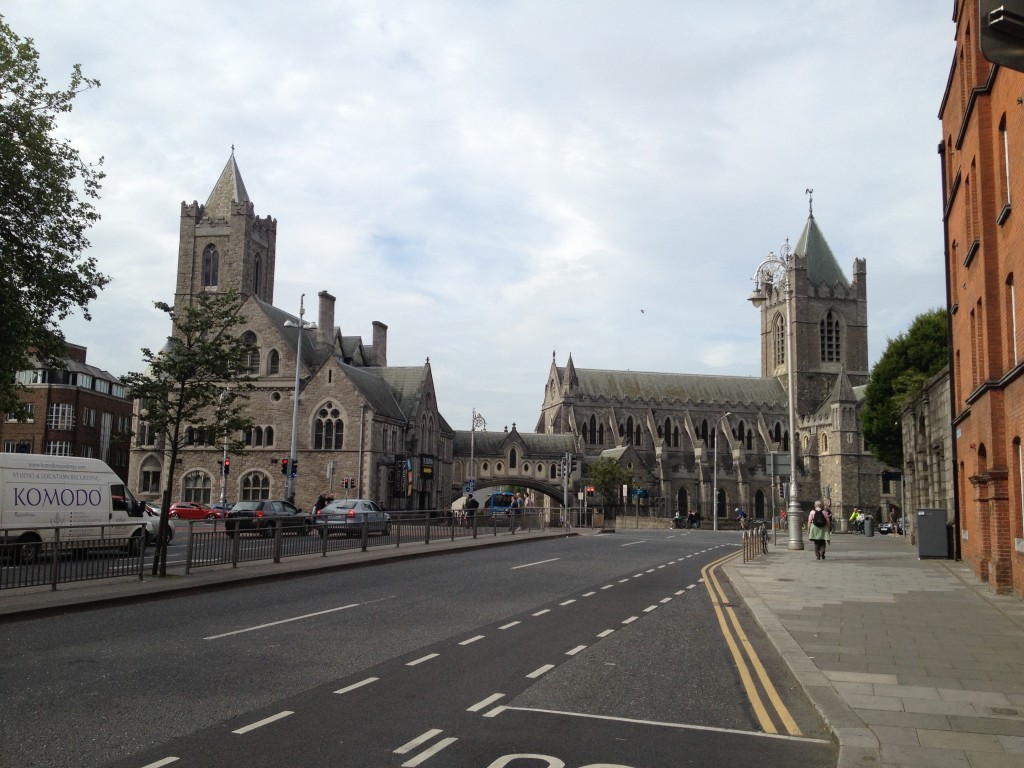 We actually caught a group of children singing while we were there.  The acoustics were amazing! 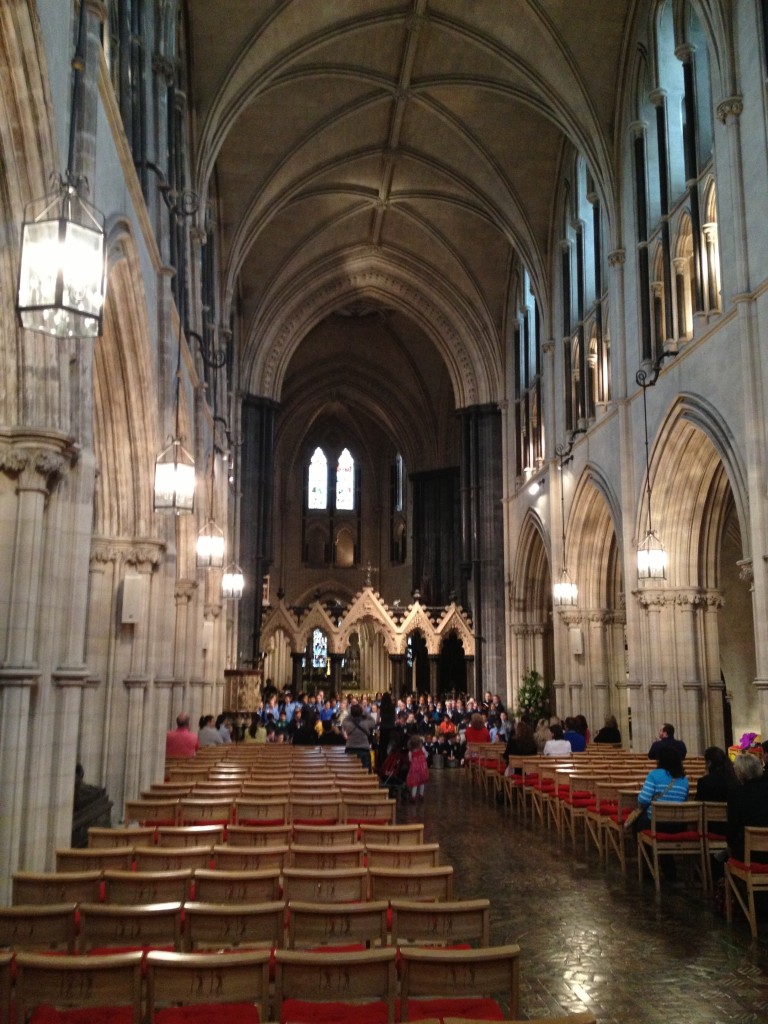 We saw Strongbow’s tomb.  He was kind of a big deal in Ireland 🙂 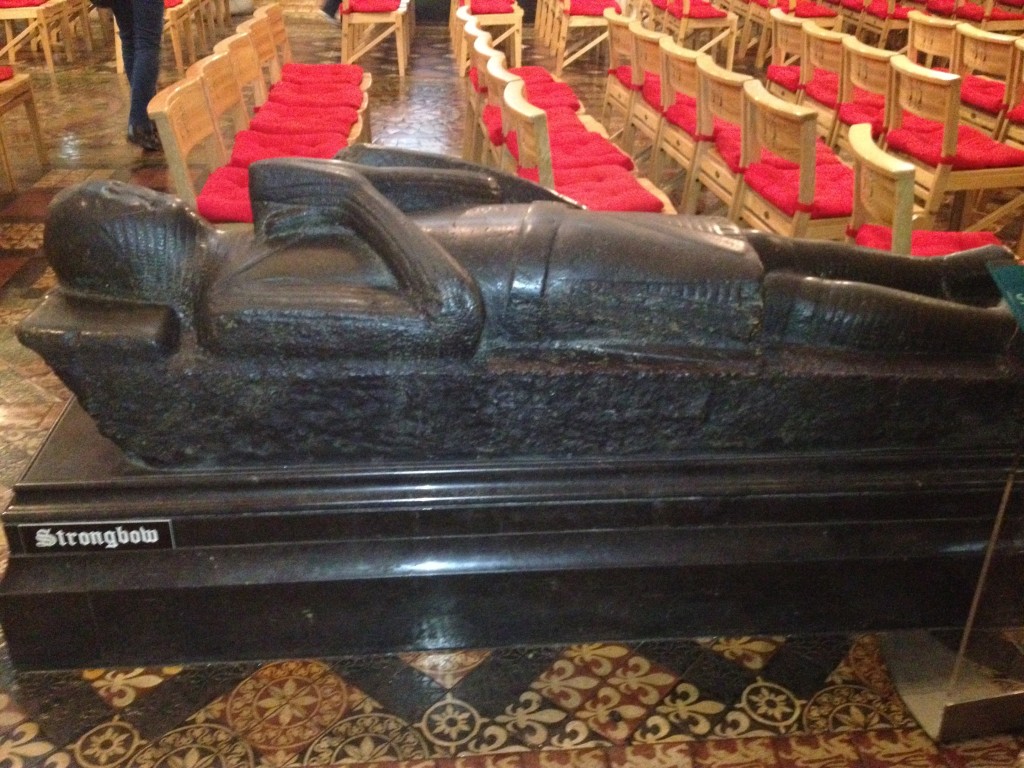 That night we went to Temple Bar, met some bartenders and I dragged my Dad to one of the local hot spots for more beverages.  The jet lag caught up with us and eventually we headed back to the hotel, walking beside the River Liffey at night. 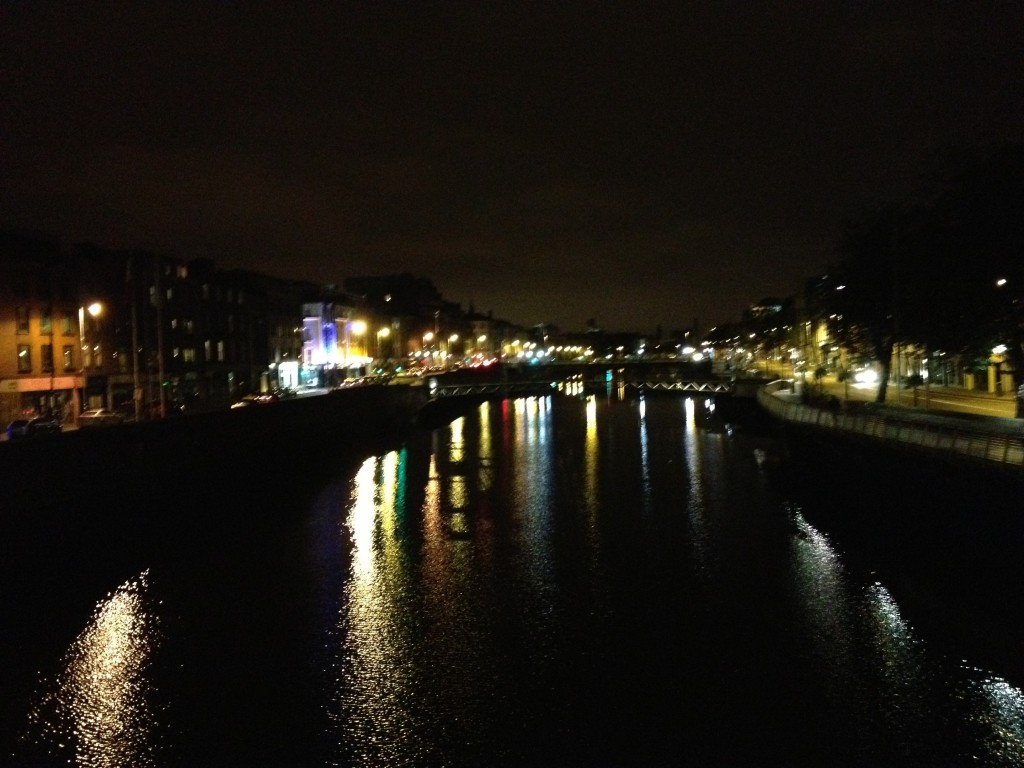 We toured the Guiness Brewery and went to the Gravity Bar on the top floor for a pint of the black stuff! 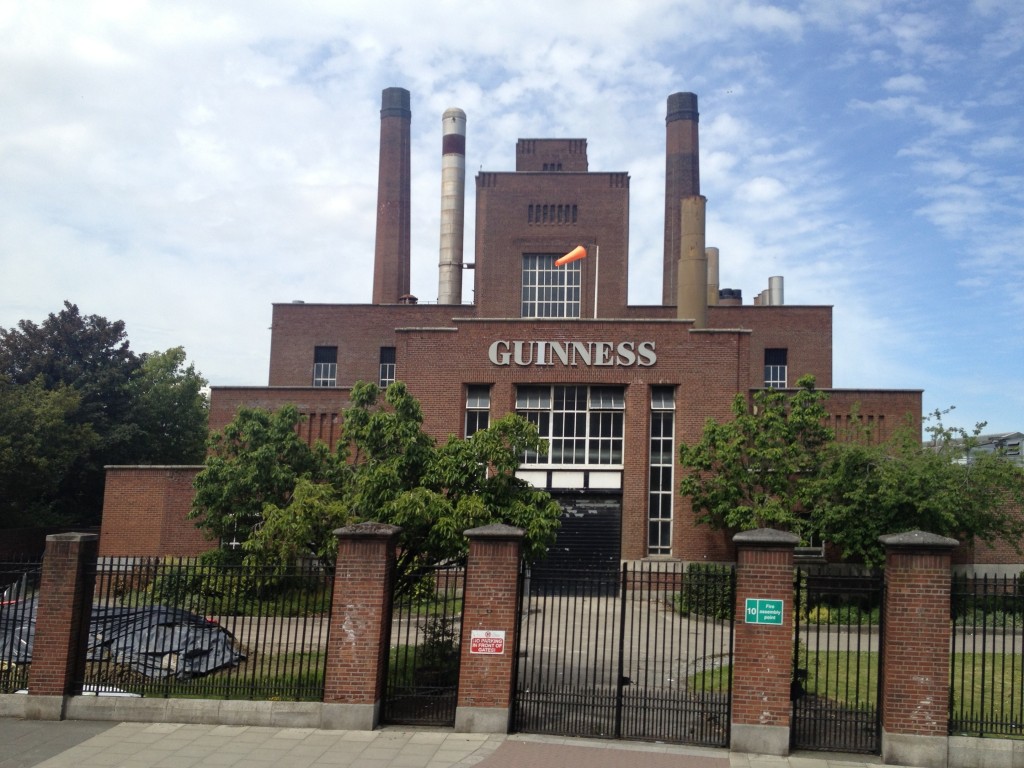 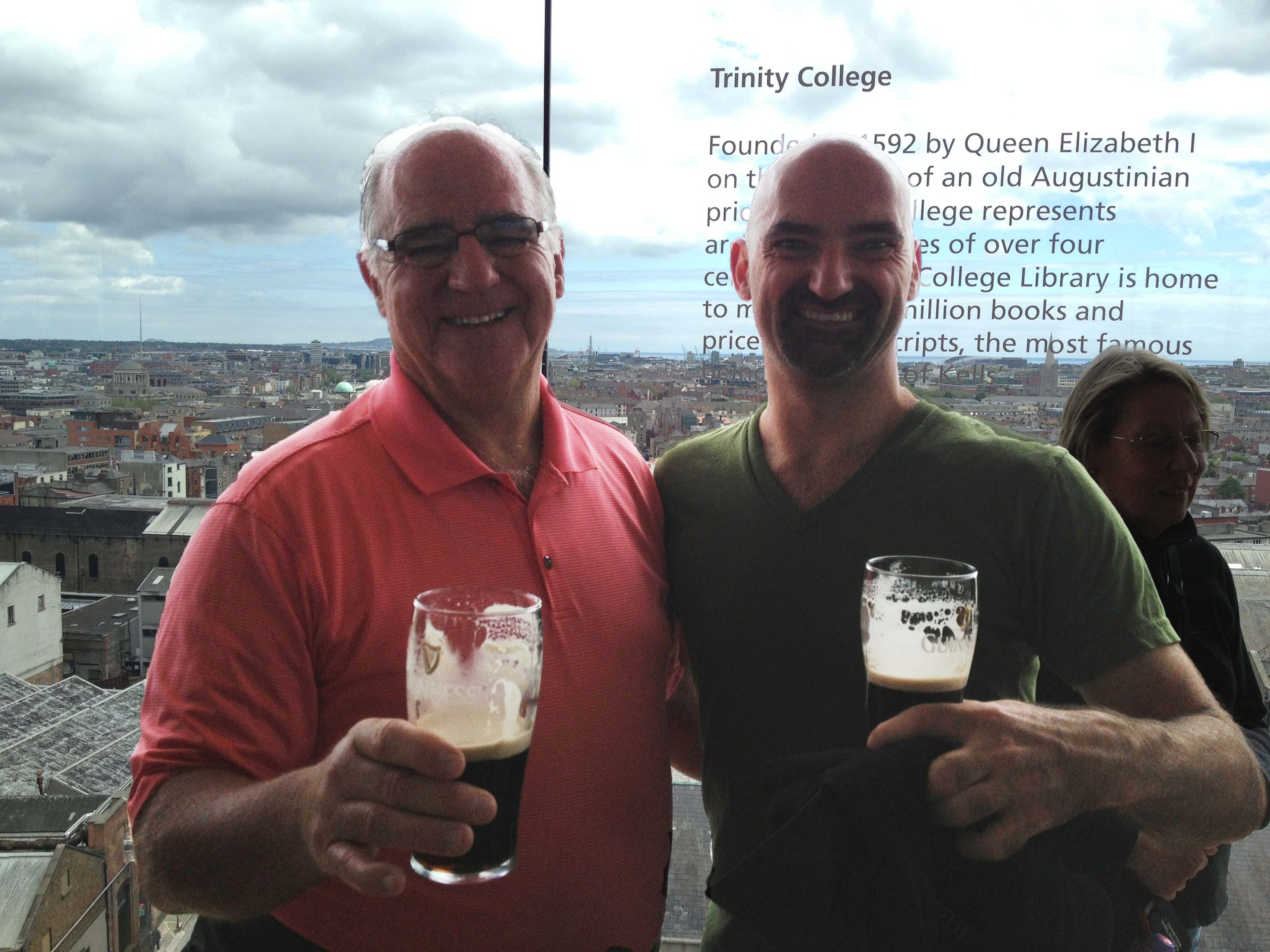 And just like that our time in Dublin was done, and it was time to get our car rental and see the countryside! But that will have to wait for the next installment… 🙂