This is the thirteenth post in a series about my 2013 trip to Ireland, Scotland and Great Britain.  Part of the free plane tickets were funded by the 40,000 point sign up bonus of the Chase Sapphire Preferred card.

For golfers, St. Andrews Old Course in Scotland is somewhat of a Mecca.  It’s Royal and Ancient Golf Club, founded in 1754 has set the rules for golf in many jurisdictions around the world.  My Dad is an avid golfer so when we expanded our trip to include Scotland, St. Andrews was one of the first places on his mind.  He had also won two rounds at the Old Course during a silent charity auction a few years back so this would be an opportunity to use them. Upon arrival, St. Andrews was just as impressive as I expected it to be. 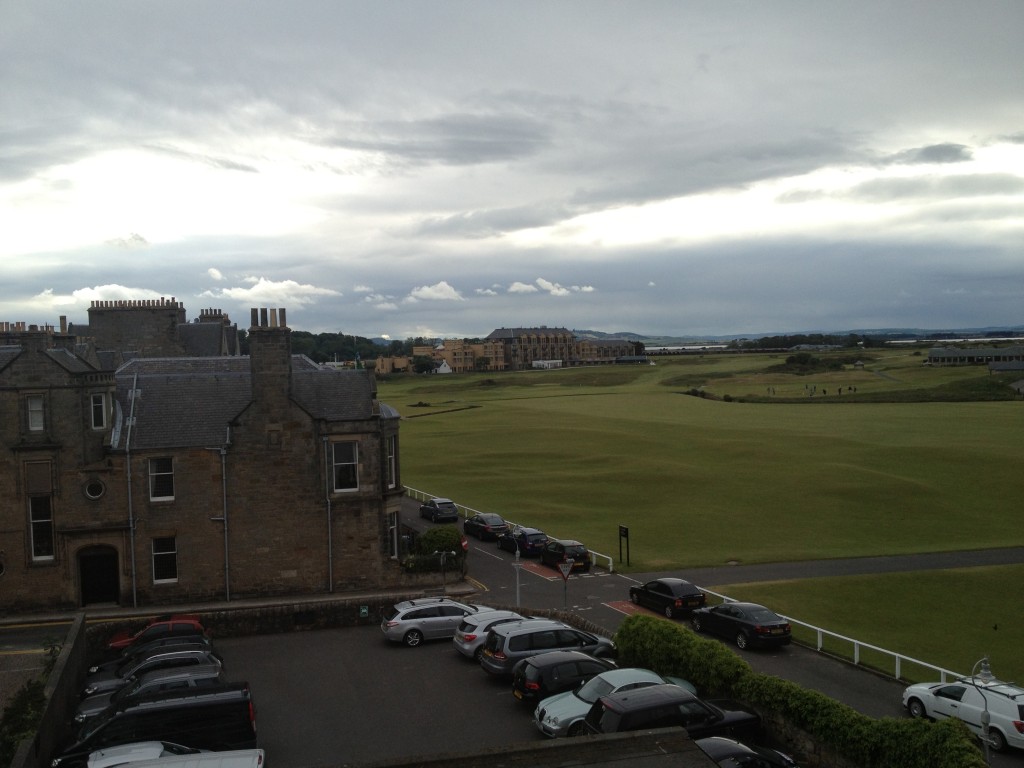 The well manicured greens right beside the sea were spectacular.

Here is a panorama pic I took trying in vain to capture the whole scene.

My Dad had picked us out a hotel right on the 18th hole, the MacDonald Rusaks.  MacDonald is a regional chain throughout the UK with a pretty mediocre loyalty program, but I signed up for it anyhow.  We had a rate of 282 GBP per night and we were definitely paying for the location because the room was small without a view. But if you are all about the golf as my Dad was, it was perfect!

We also were able to walk around the village a bit and see the quaint town where St. Andrews College is as well. 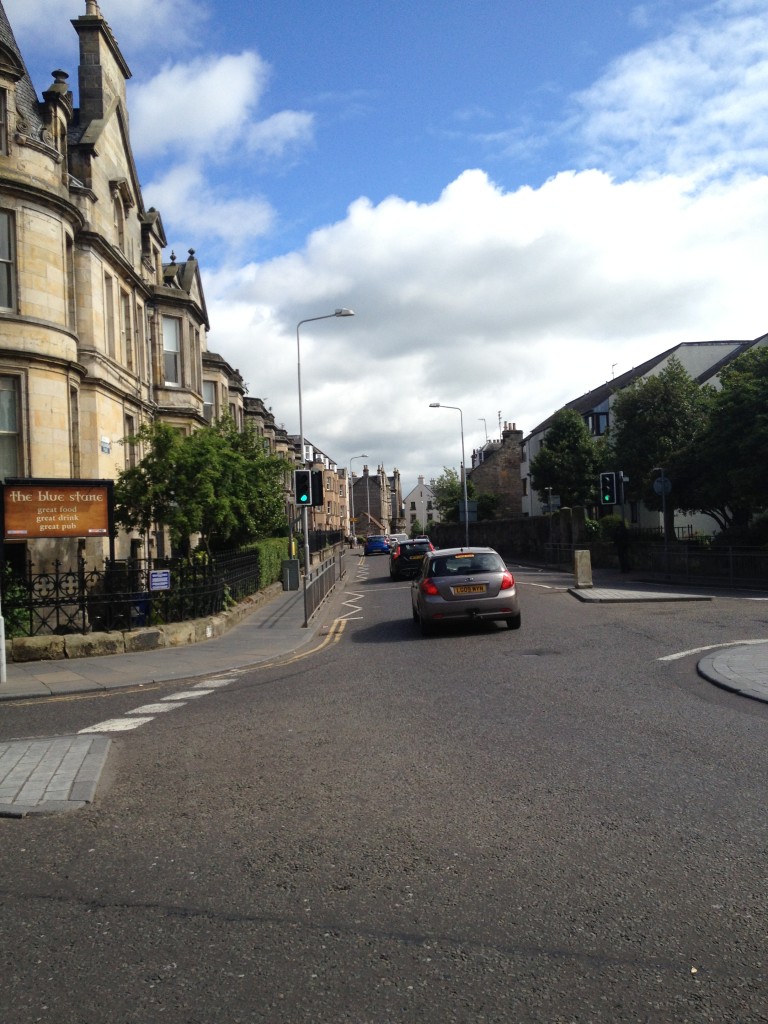 West Sands Beach is right beside the Old Course and brought me back to my youth since it was the setting for the famous opening scene from Chariots of Fire!

My Dad was able to play two rounds at St. Andrews which made both of us happy, but we left right after the second round to catch the train up to Inverness stopping in Aberdeen along the way.  Oh, what a fateful stop that would be! The countryside along the coast to Aberdeen was gorgeous. 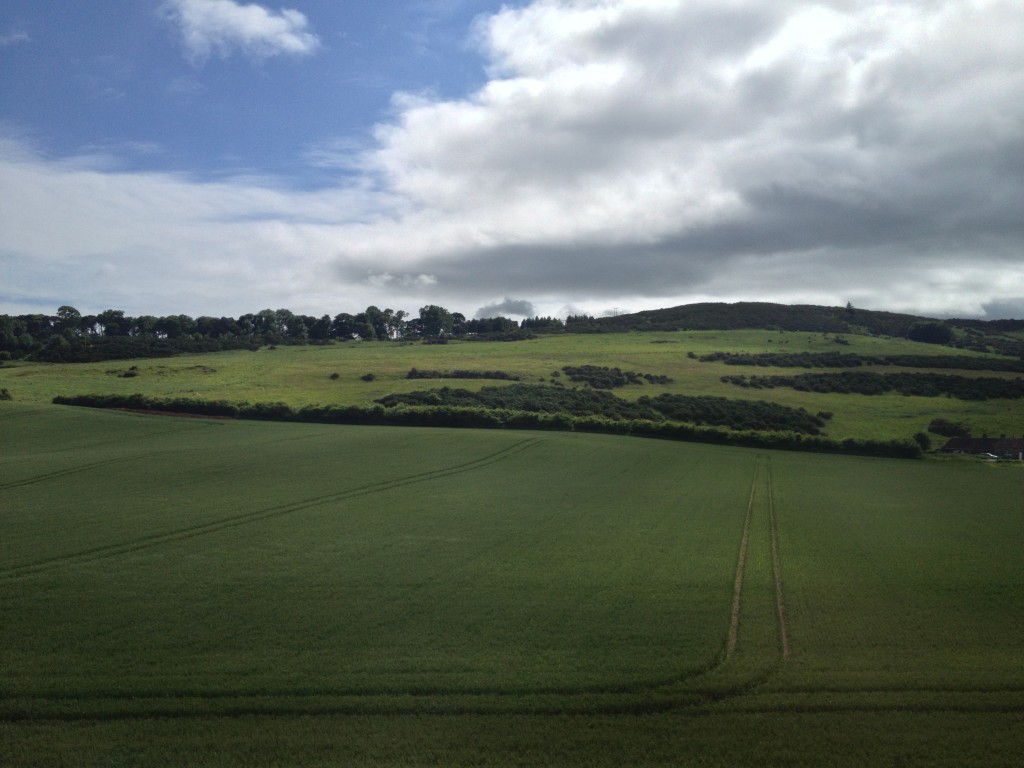 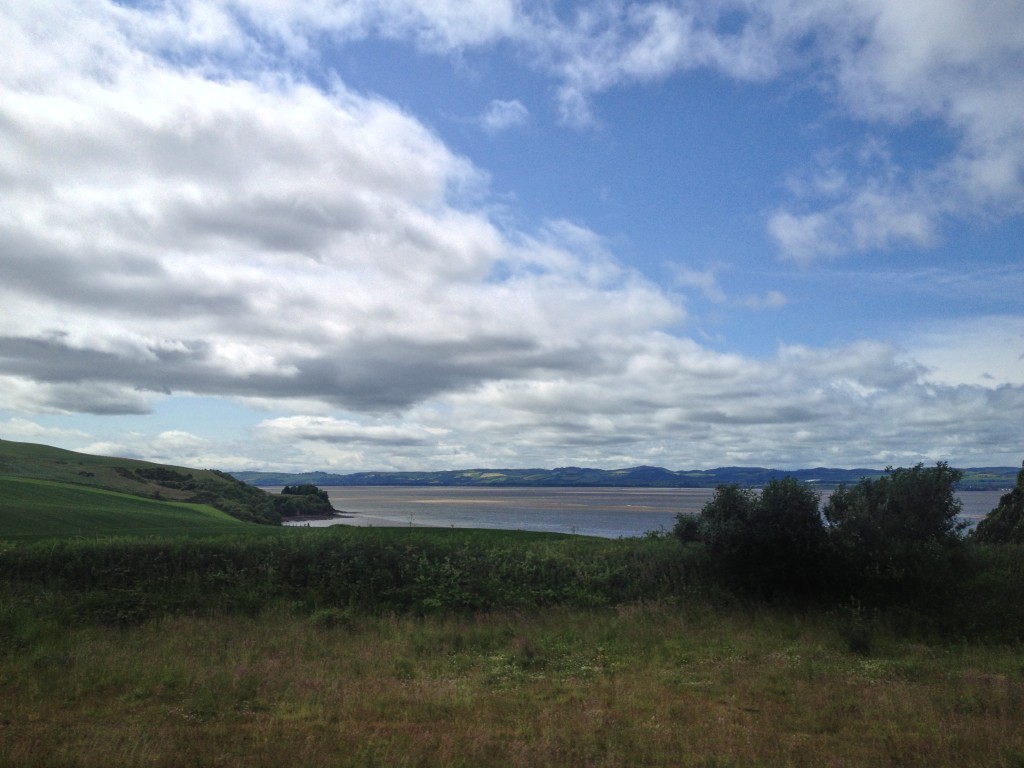 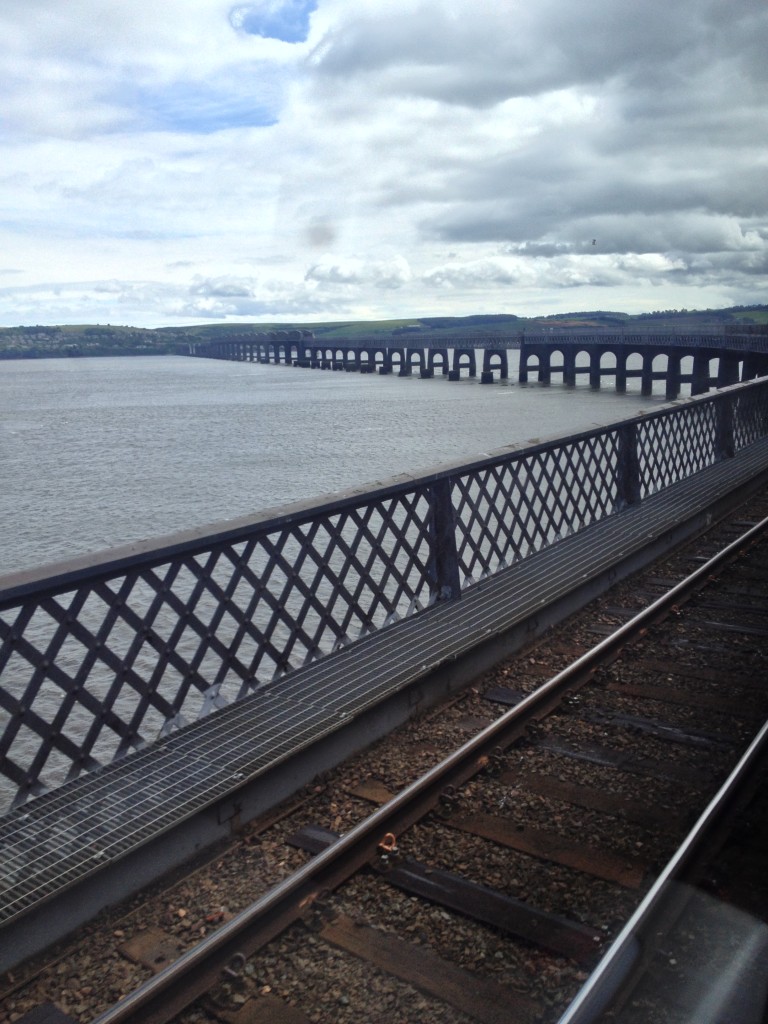 Another one of the reasons I chose train travel in Scotland was so I could drink wine instead of drive!

Upon arrival in Aberdeen, we checked our luggage at the Train Station and wandered around quickly seeing how it got the name of the “Granite City.” 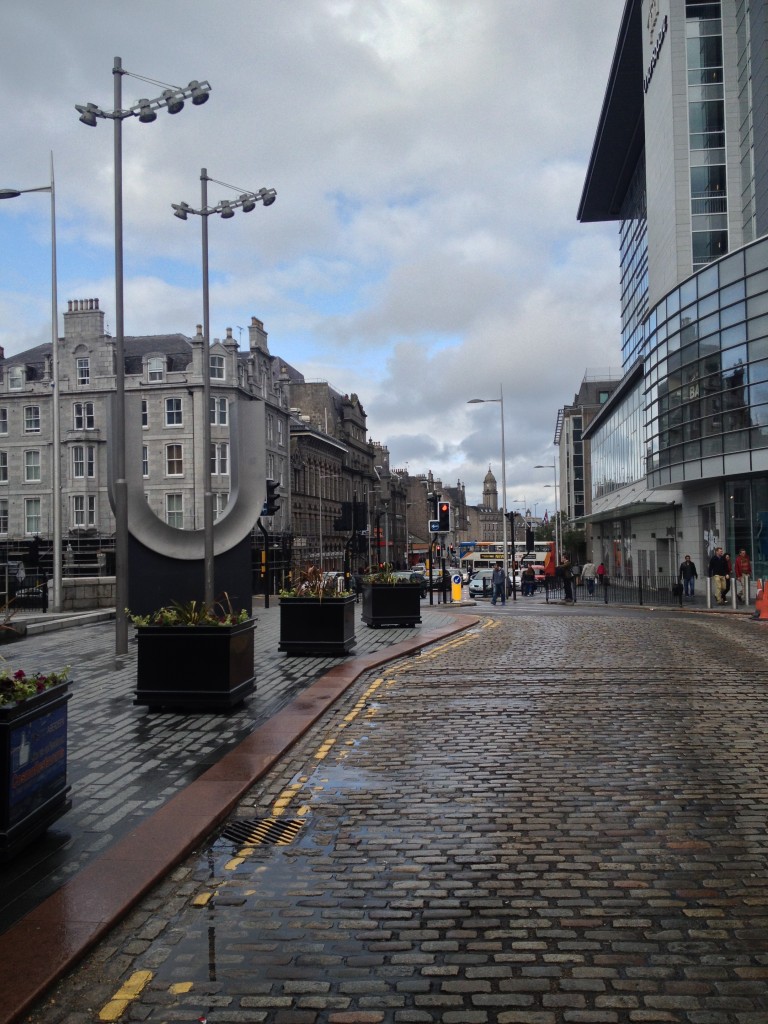 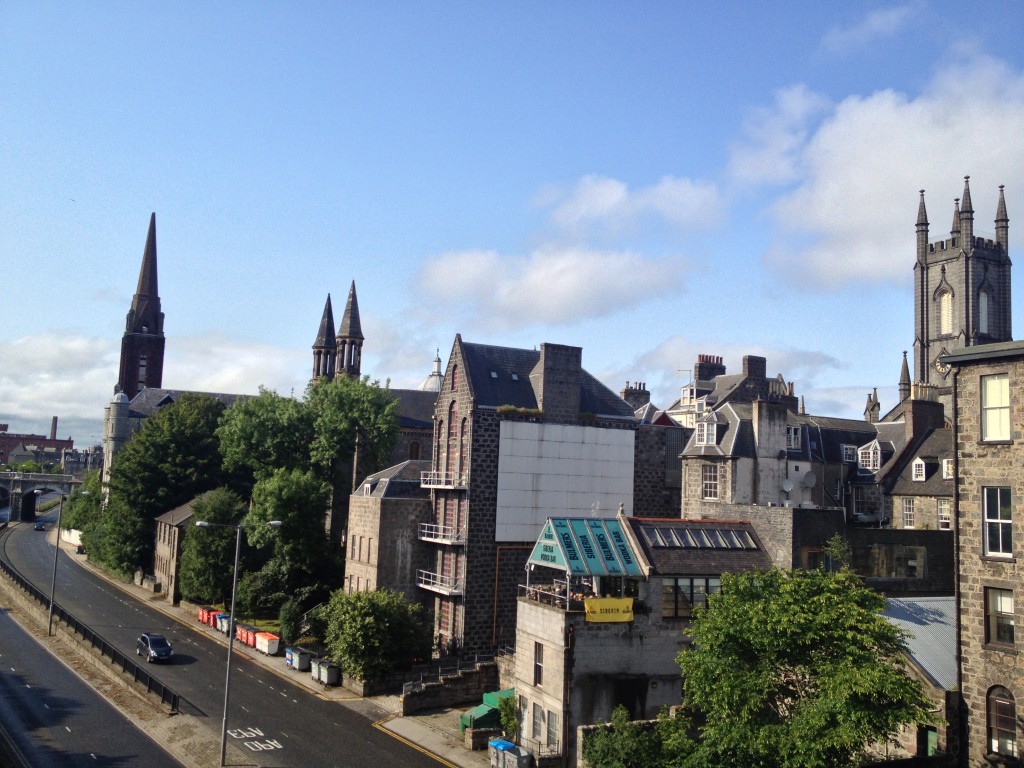 We made the great decision based on my World Offline Travel Guide to go a restaurant called Moonfish Cafe where we had probably the best meal of the trip!  Here was an incredible cheese platter that we had. 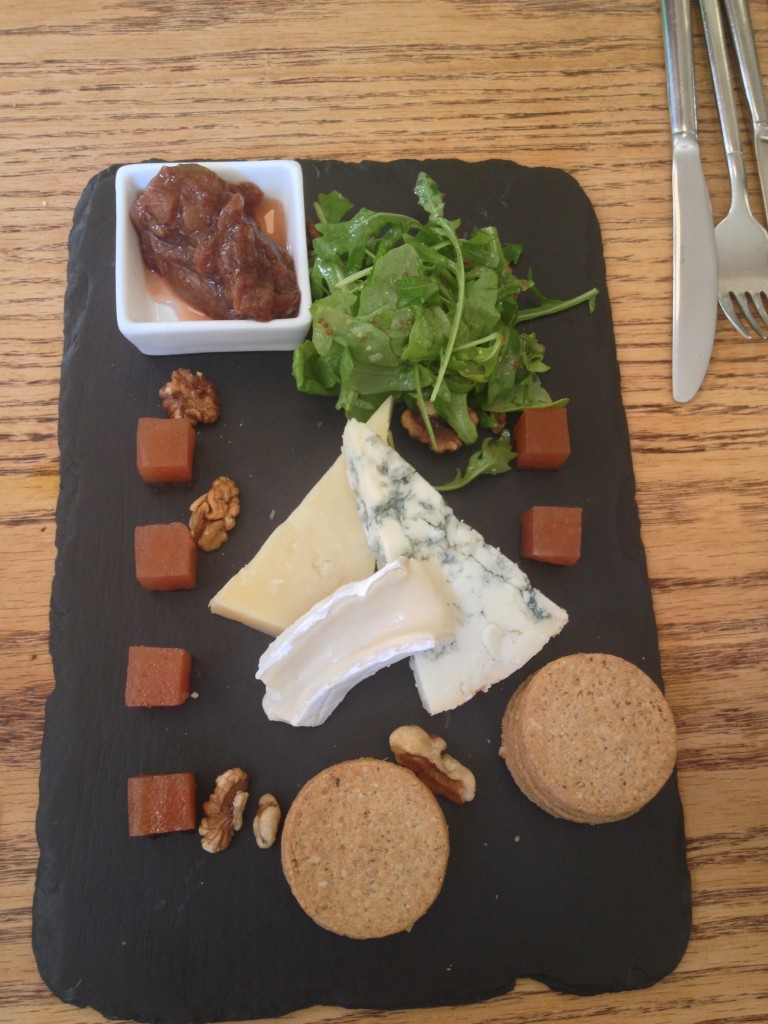 It was at Moonfish Cafe that what we now refer to as “The Drambuie Incident” occurred.  My Dad is the friendly sort, and a meal seldom goes by without him making some new friends and this night was no exception.  Towards the end of our meal, he struck up conversation with a couple at the table next to us.  Long story short, they were from Aberdeen and insisted on buying us one of their local scotches.  Keep in mind this is after a bottle of wine on the train and another bottle at dinner.  I believe it was called Highland Park and boy did it go down easy.  The next thing you know, the pretty blonde was insisting that we try some Drambuie.  Well, blondes have a way with me so who was I to disappoint so we knocked back one of those as well.  At this point we had about 20 minutes before the last train to Inverness left the station.  We explained this to them, but would have none of us leaving. They insisted that we go with them for a quick drink at the oldest bar in Aberdeen and it was even on the way to the train station.  It may have been the wine, or the scotch, or the Drambuie, but for some reason we agreed to this silly plan. You can see from the photographic evidence that we were in no condition to argue.

After quickly finishing our beers at the Old Kingshighway Bar, we barely made the last train up to Inverness, the land of Loch Ness and the ancestral lands of my Mother’s family!