This is part 18 of a series on my trip to Austria, Germany and China.

In my usual fashion, I almost missed my 14 hour flight home from Beijing to Dallas. Mental Note: When using public transport to get to the airport always give yourself much more time than you think you should need! Running through the airport getting hot and sweaty right before a 14 hours flight is not recommended. :)I was running so late that I wasn’t able to check out the Air China Business class lounge for a review! And when you have a 15 hour flight ahead of you booked in Business Class, the last thing you want to do is miss it and have them rebook you for the next available flight in coach! 45 hours in coach sounds like cruel and unusual punishmnet to me (and I know first hand since I did a 14 hour flight to Australia in coach back before I knew about the points and miles game).

Since I was in business class, I was able to take advantage of the front loading gate which has both less people and it gives your flight attendants a chance to greet you and start off the premium cabin experience the right way. 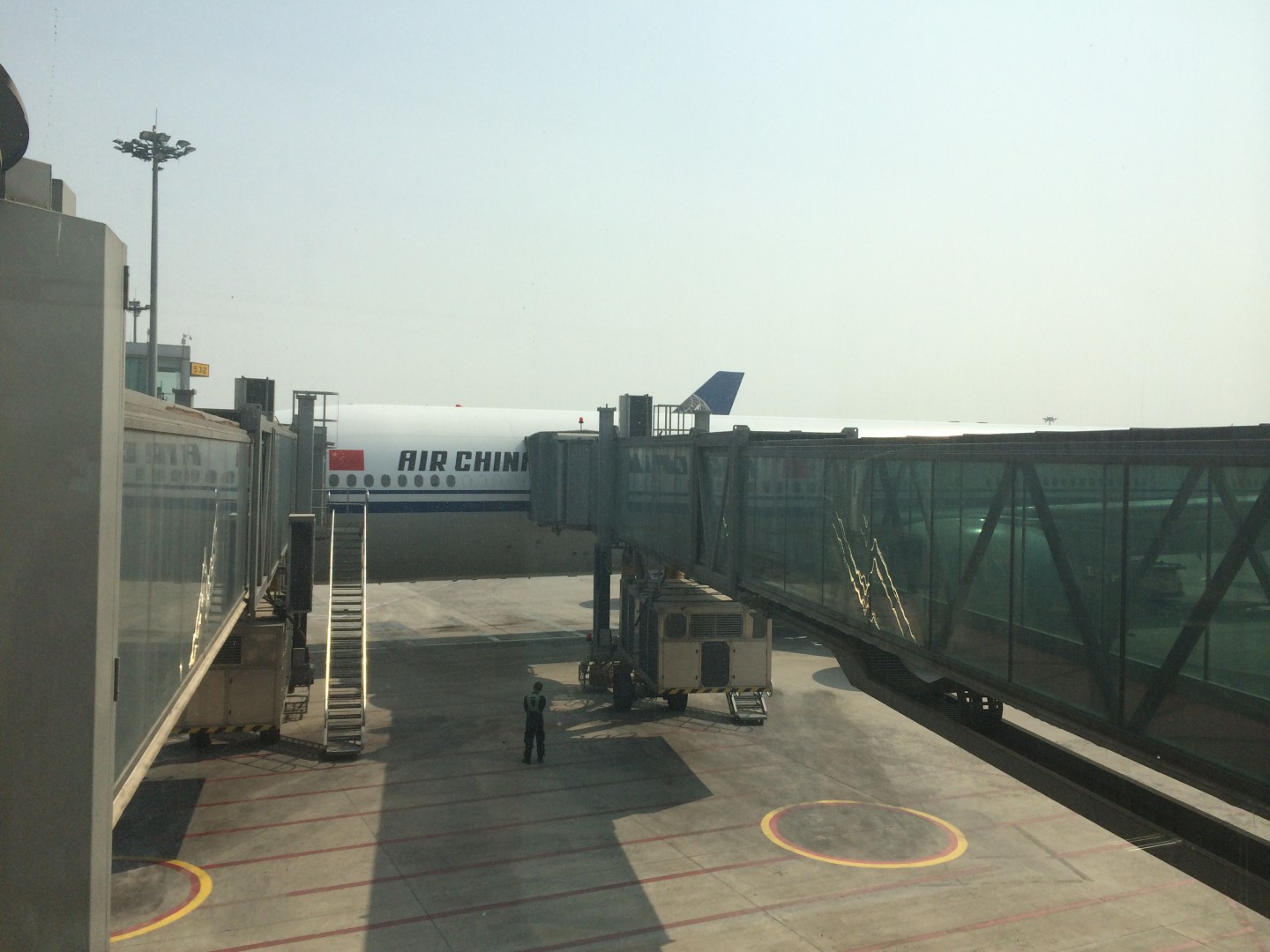 The seats were finished in a neutral gray color that looked a bit boring but was better than something that hurt your eyes. 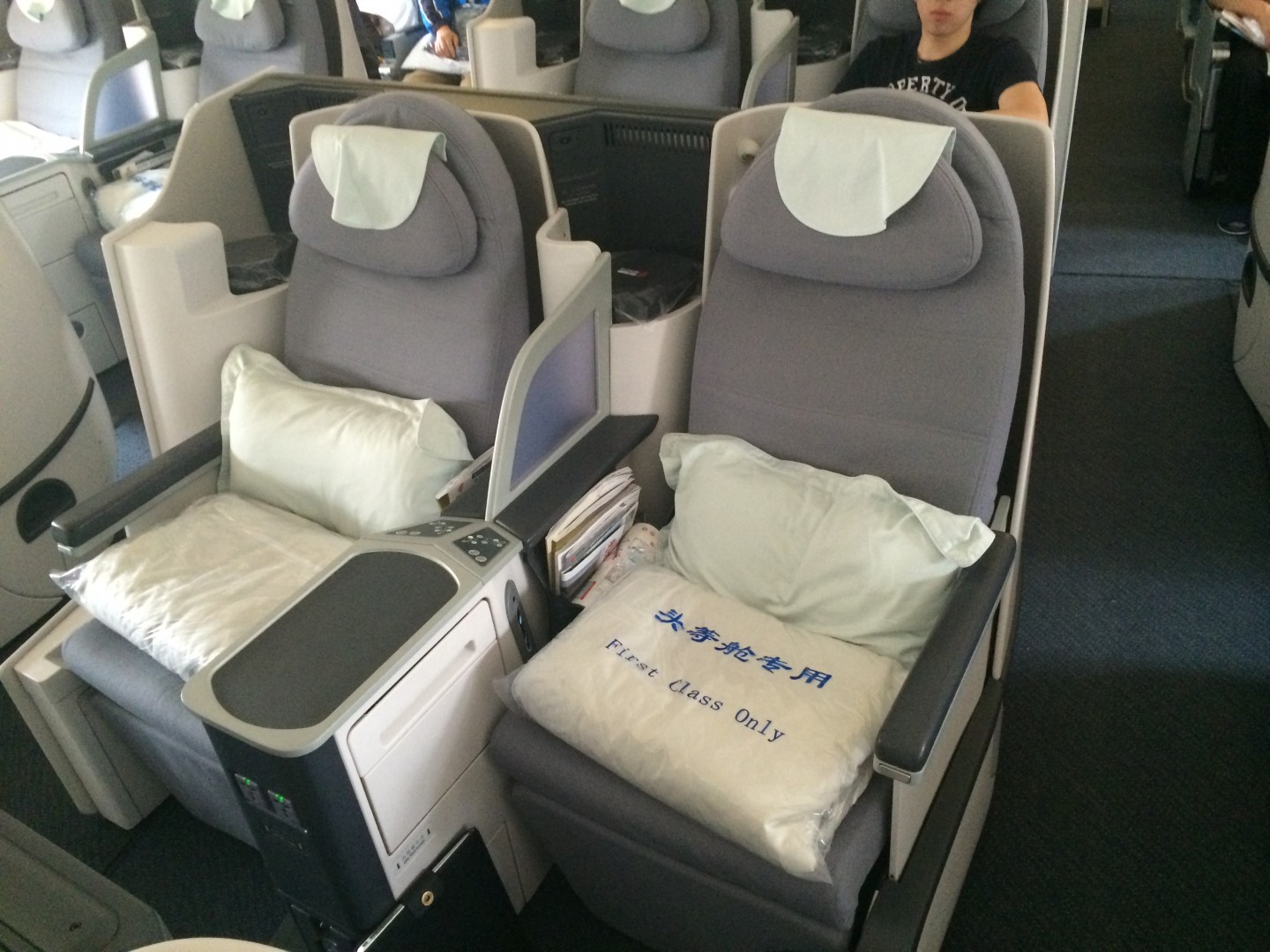 As the champagne and hot towelette arrived though my thoughts about the seat colors started to fade away. 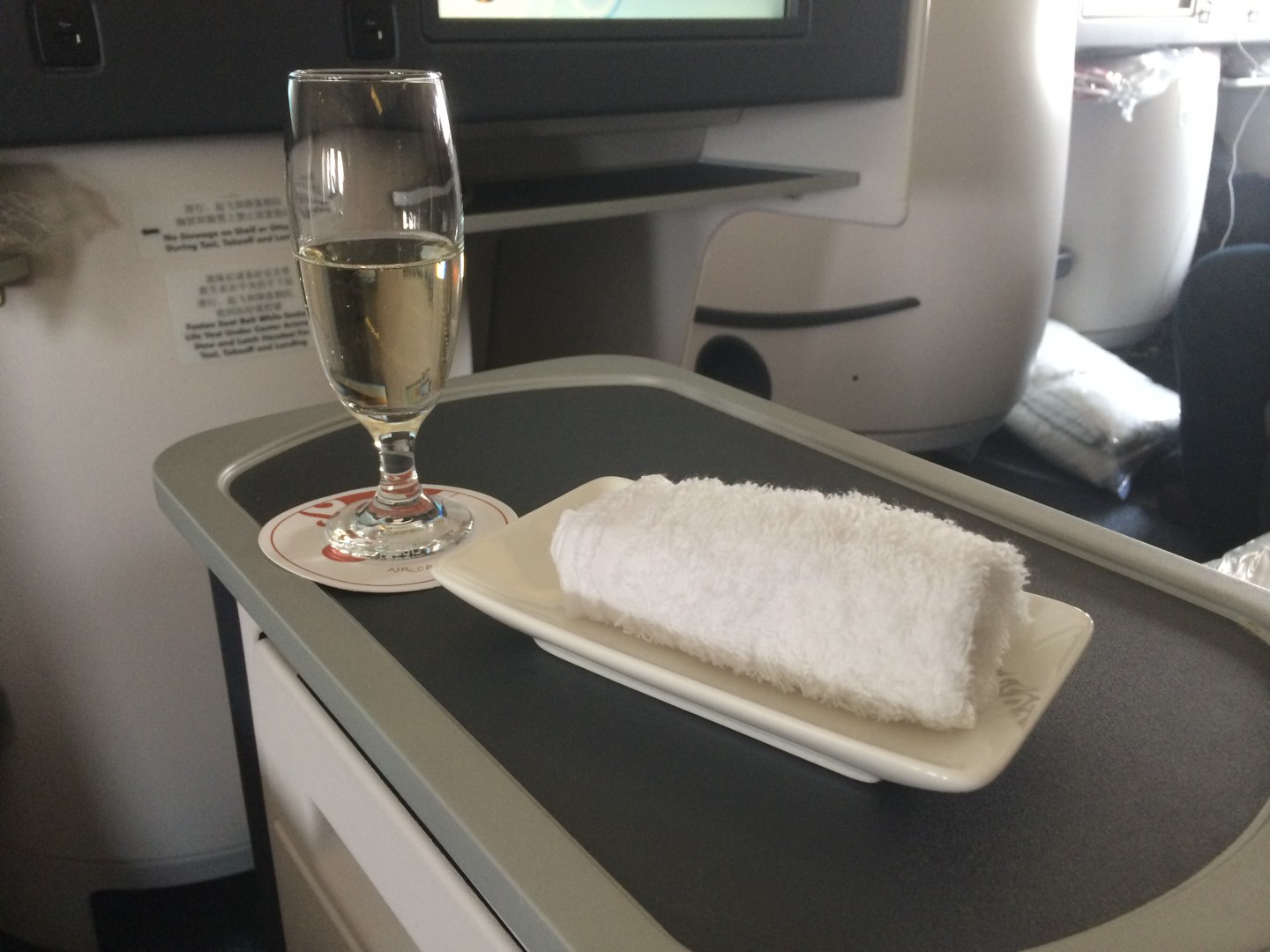 Since this was the new 777-300 aircraft it had the new style of overhead baggage storage which really opens the cabin up and makes it feel a bit more airy.The seat layout was great with a 1-2-1 configuration which means that every seat has aisle access. 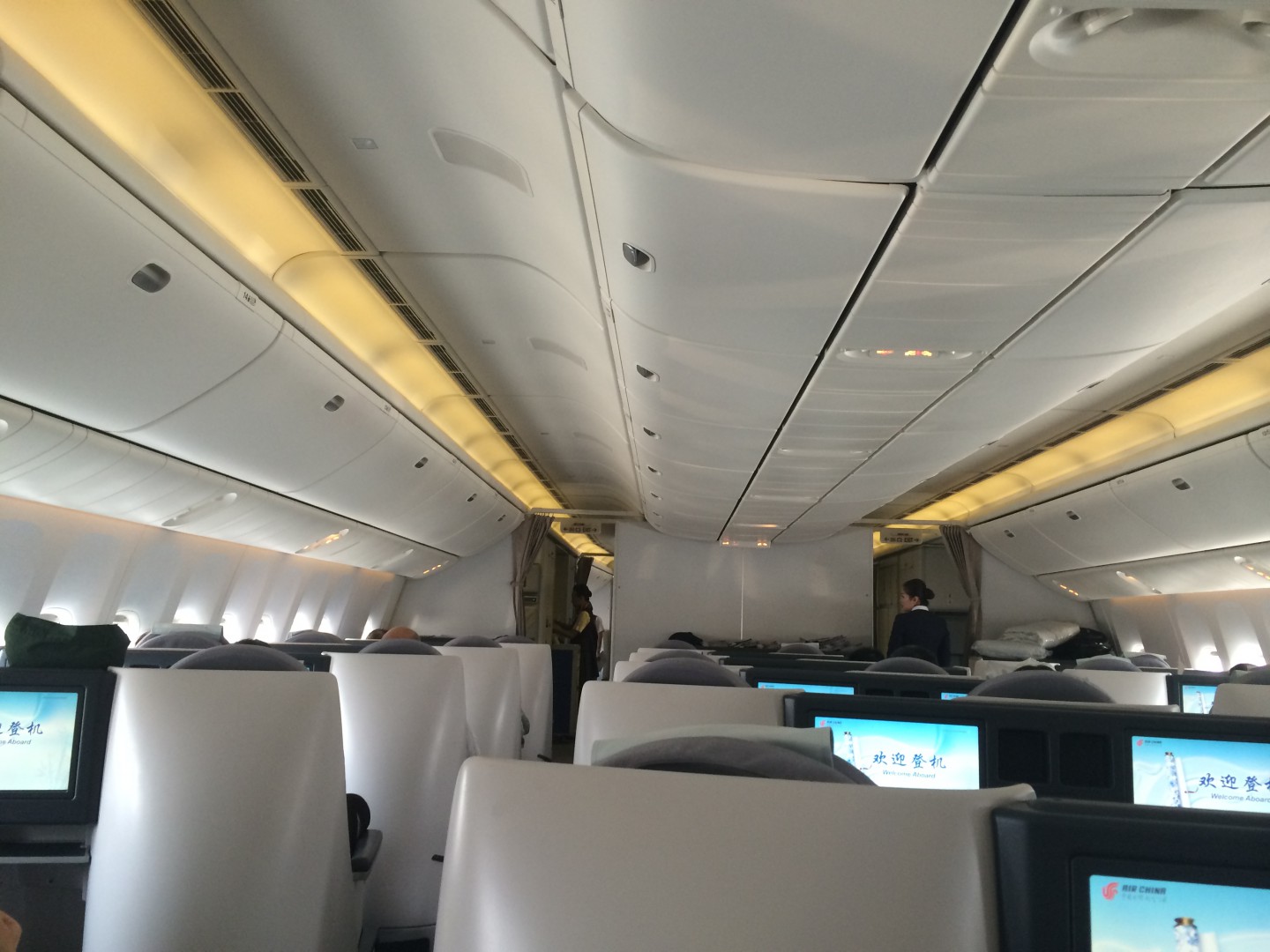 There was plenty of room for me to stretch out and get comfortable. The 15” screen had the usual assortment of Video on Demand with Hollywood hits as well ad Chinese movies and other international choices. 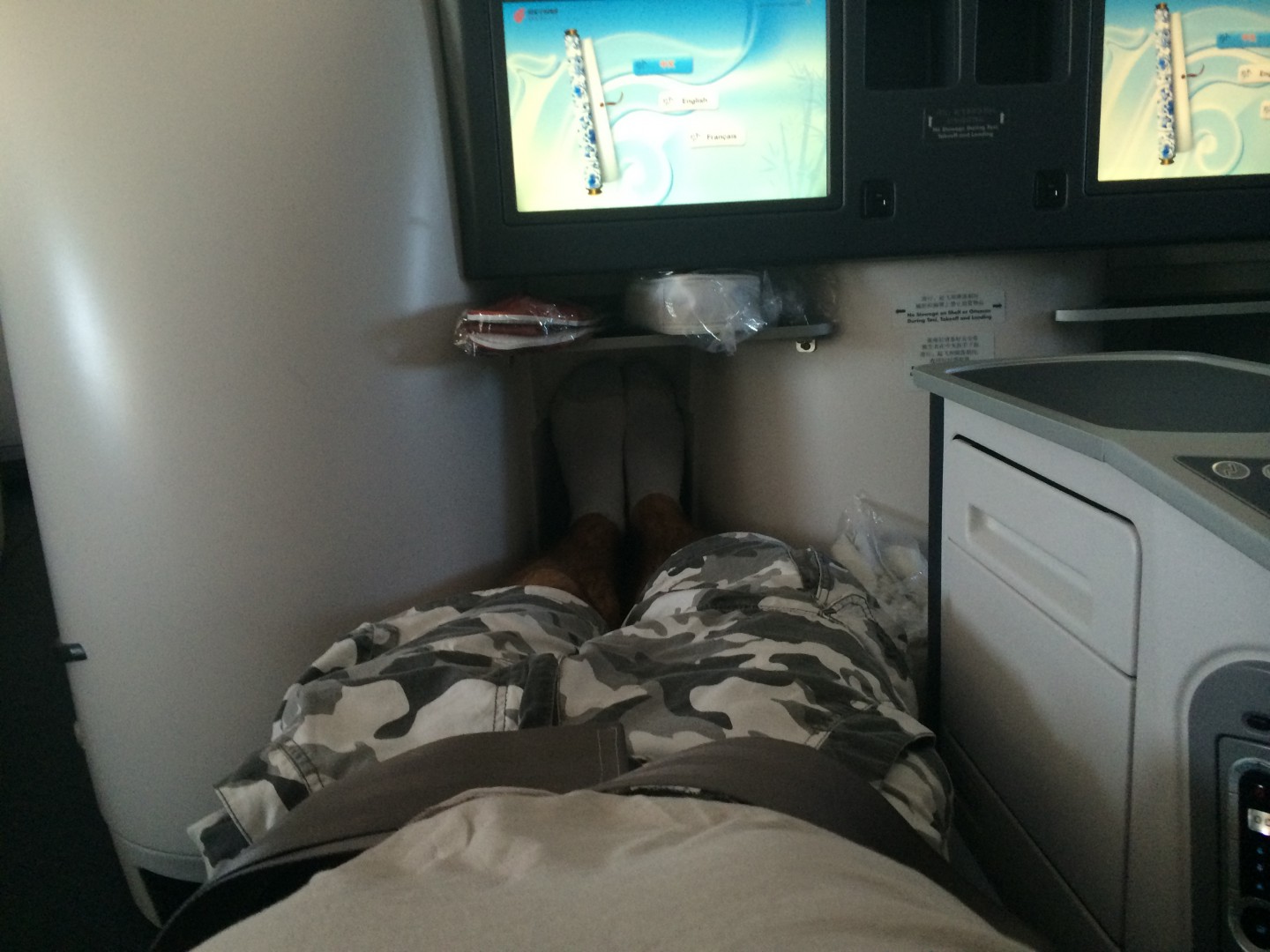 Business Class came with a set of noise cancelling headphones which are great if you don’t have the Bose QC-15’s like I do (and if you don’t then you should consider getting a pair!) 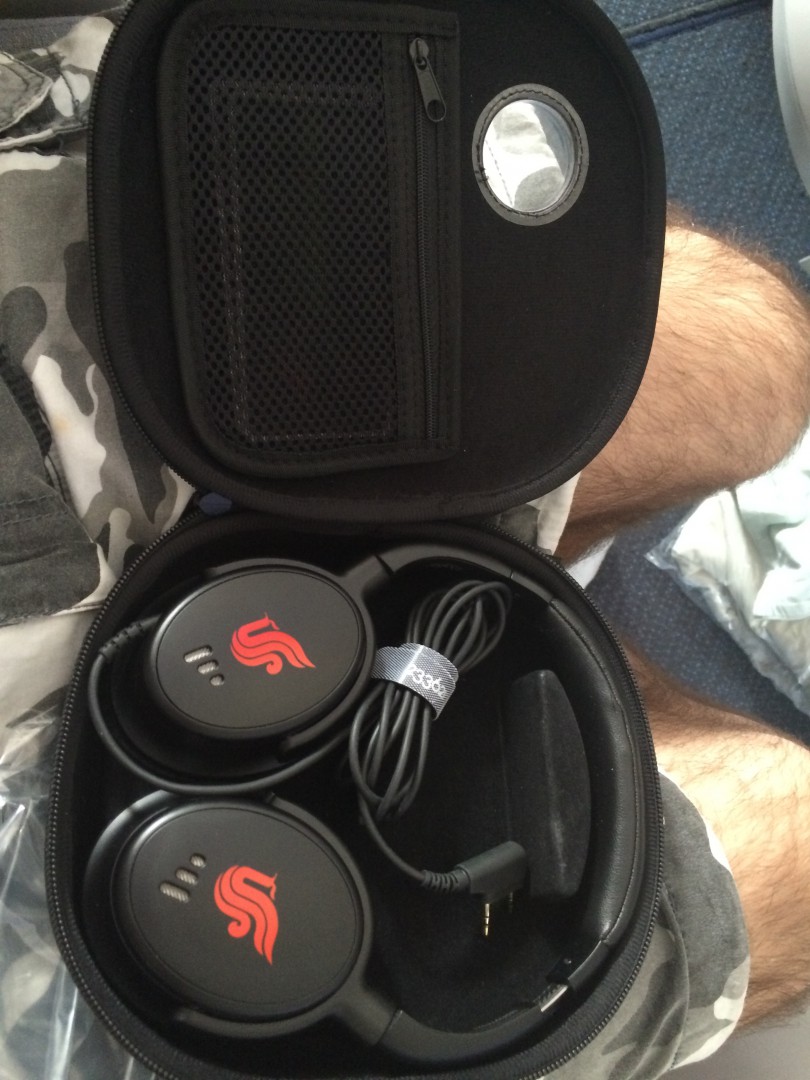 The amenity kit was from L’Occitane and came with earplugs, an eyemask, toothbrush and toothpaste, a brush, and some lotion to keep your skin moisturized during the 15 hour flight. 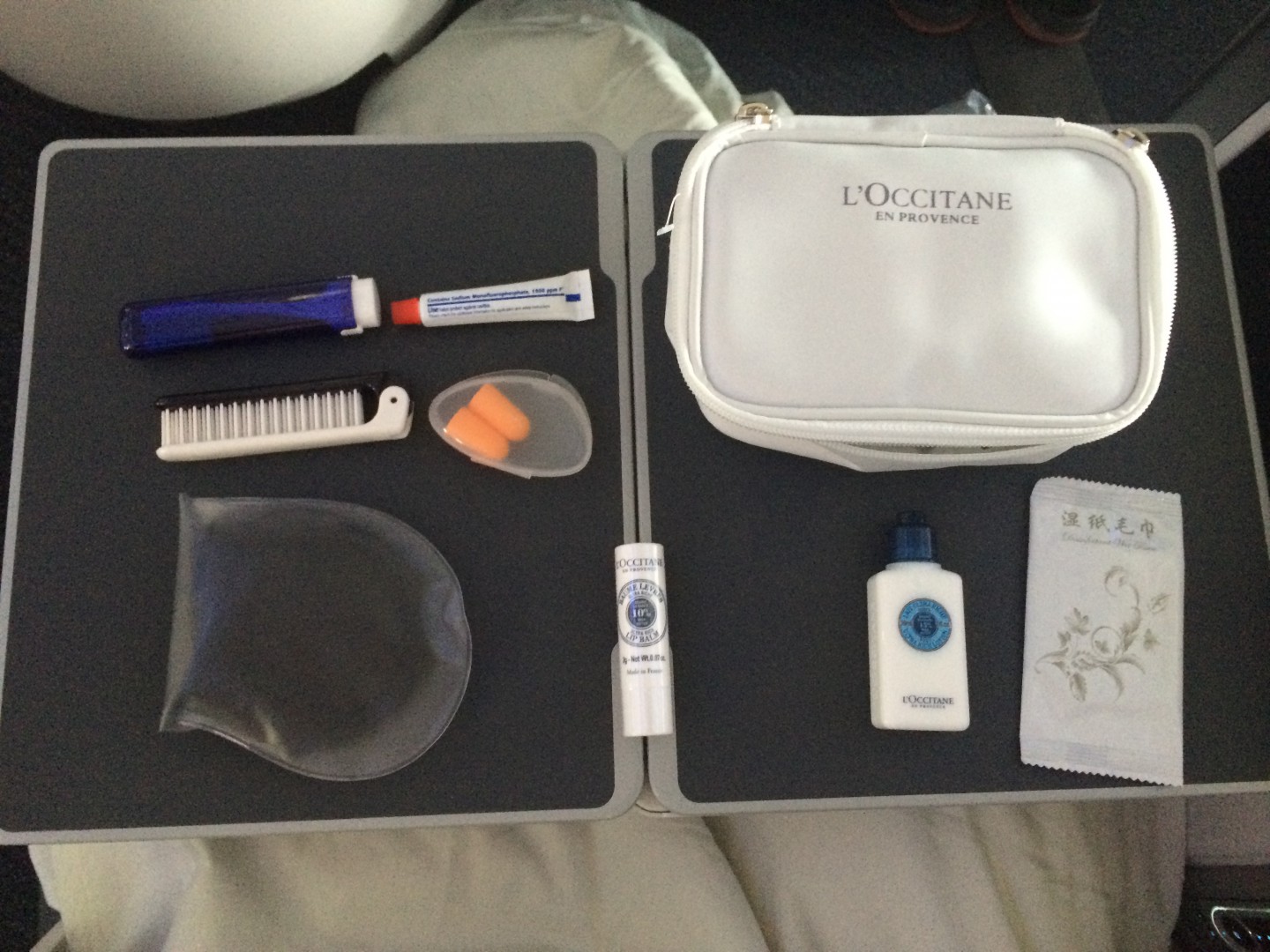 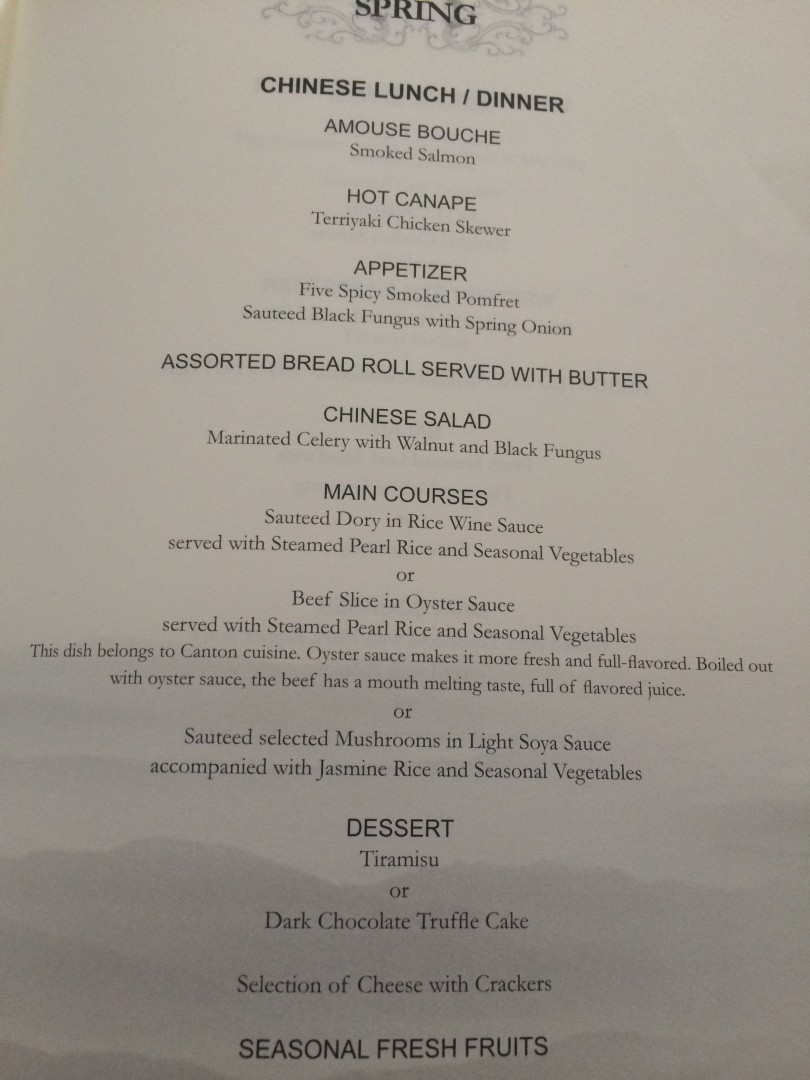 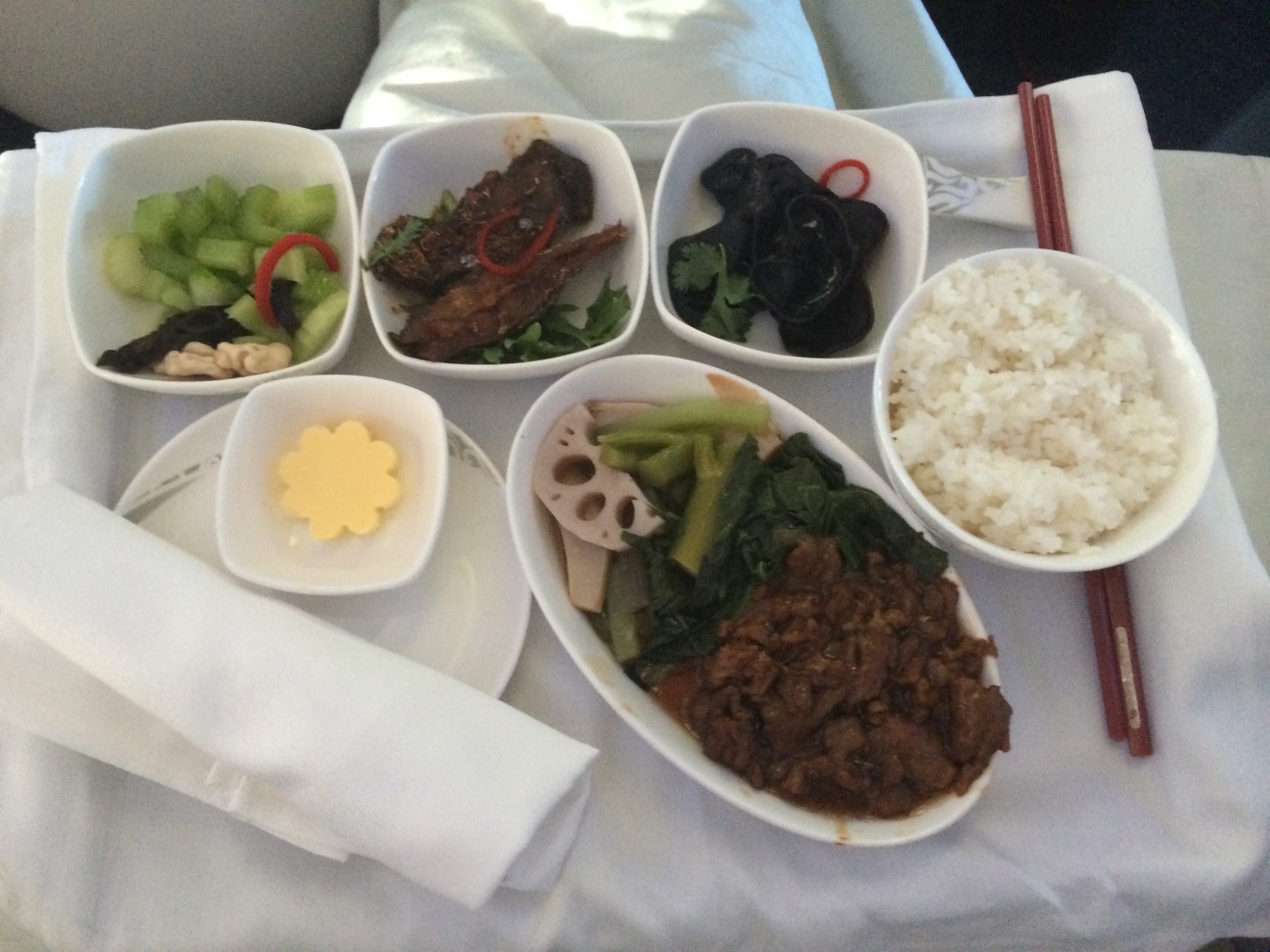 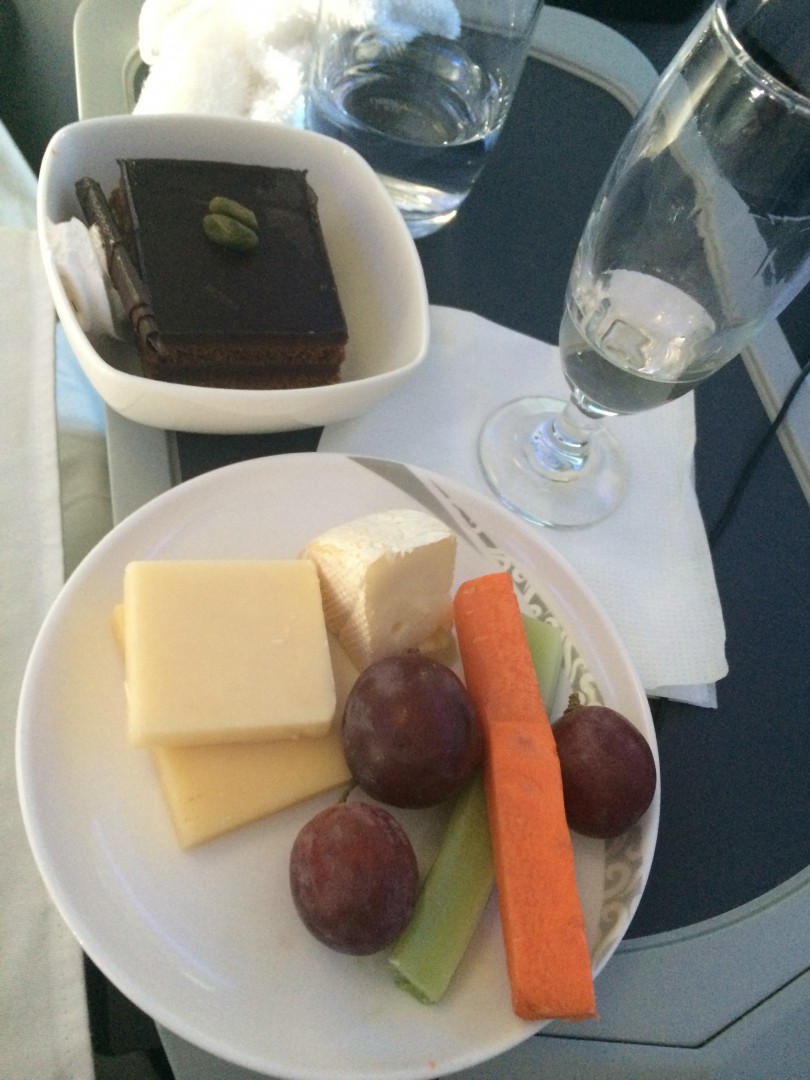 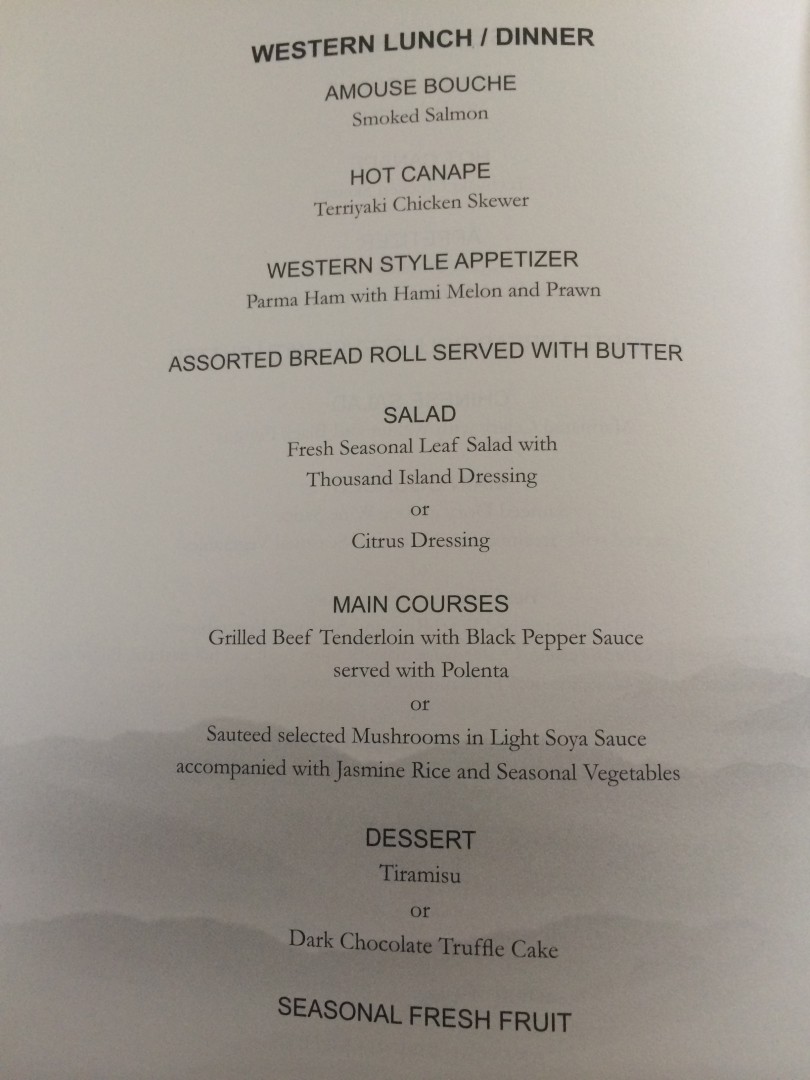 One thing that I love to see in the premium cabins (and it isn’t in every one) is a self service bar for both drinks and food. While I love being served in a premium dining scenario, being able to go grab a snack or drink refill whenever you want is great! 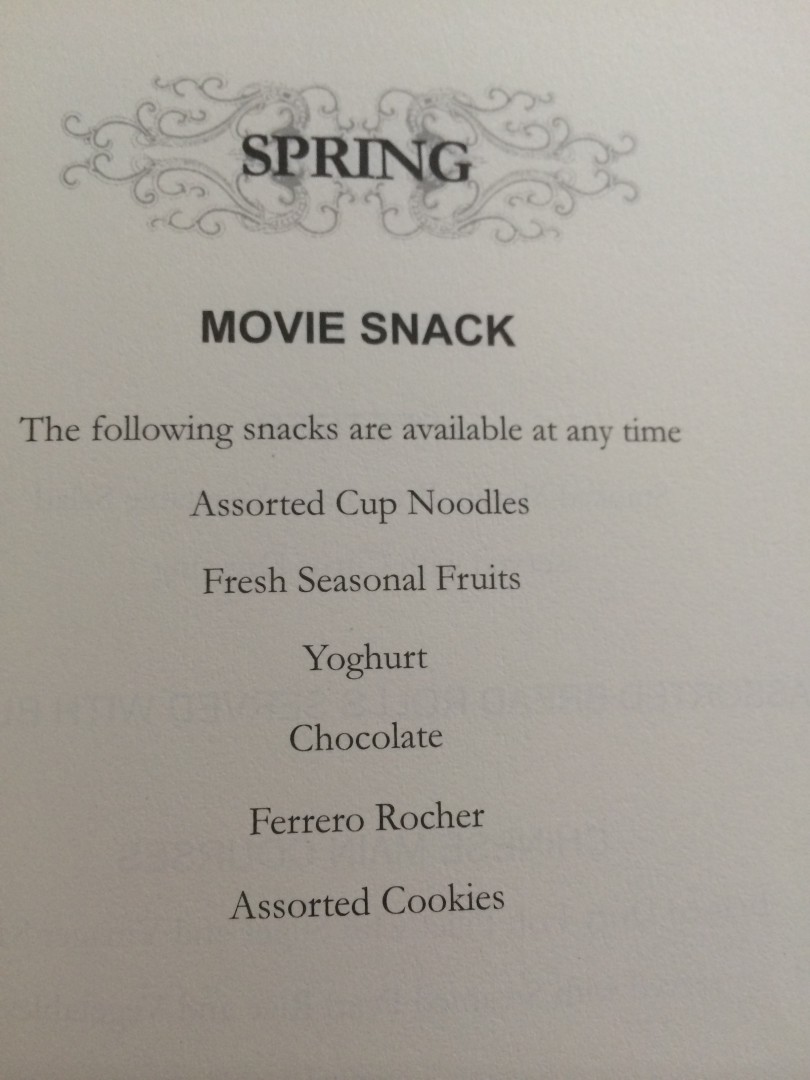 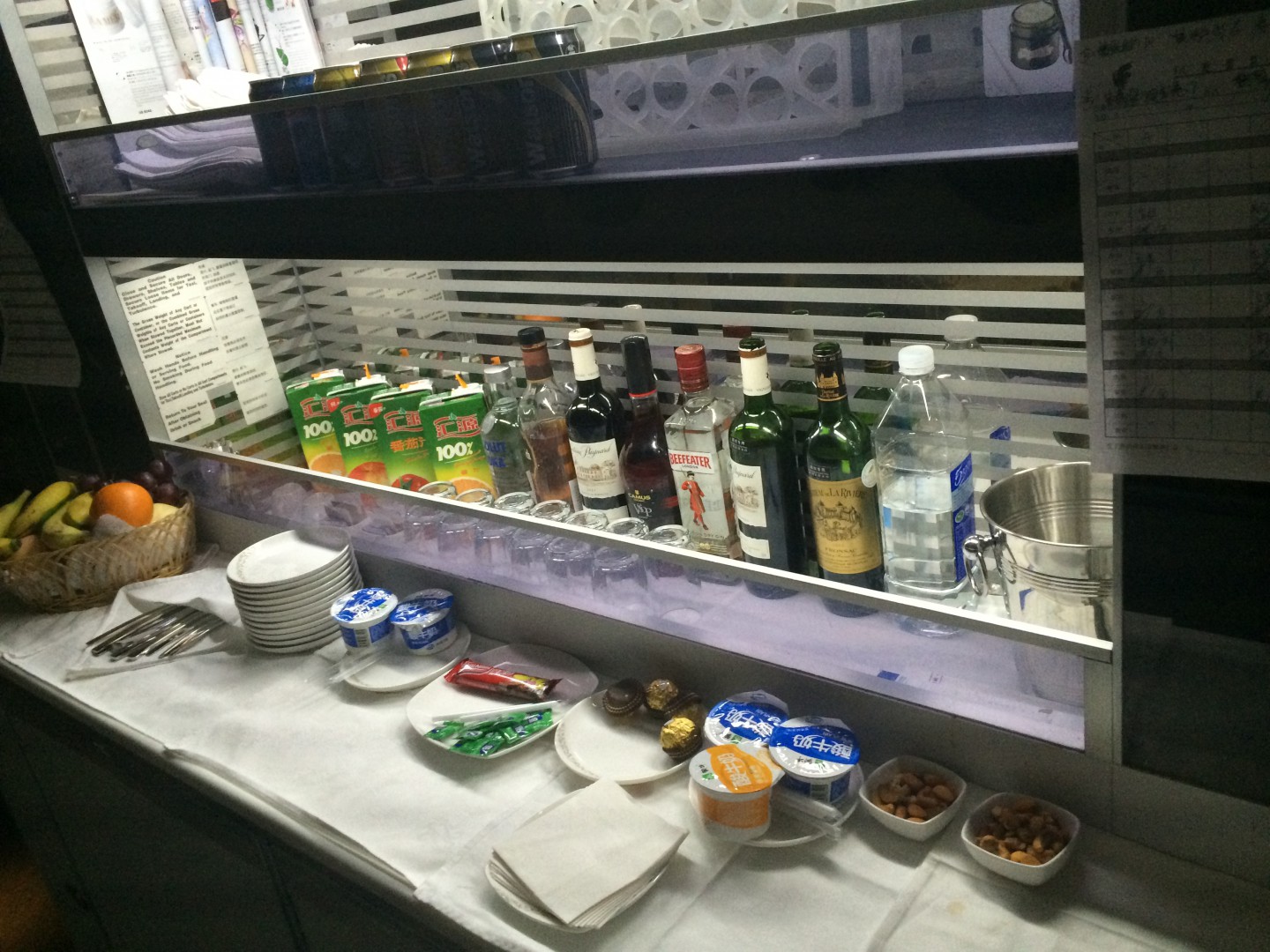 As you can see this particular self service bad was pretty well stocked with an almost full bad, candy bars, snacks, and many other things to choose from.The meal served before landing I decided to go with a Western selection to ease back into Western culture after my month in the east. 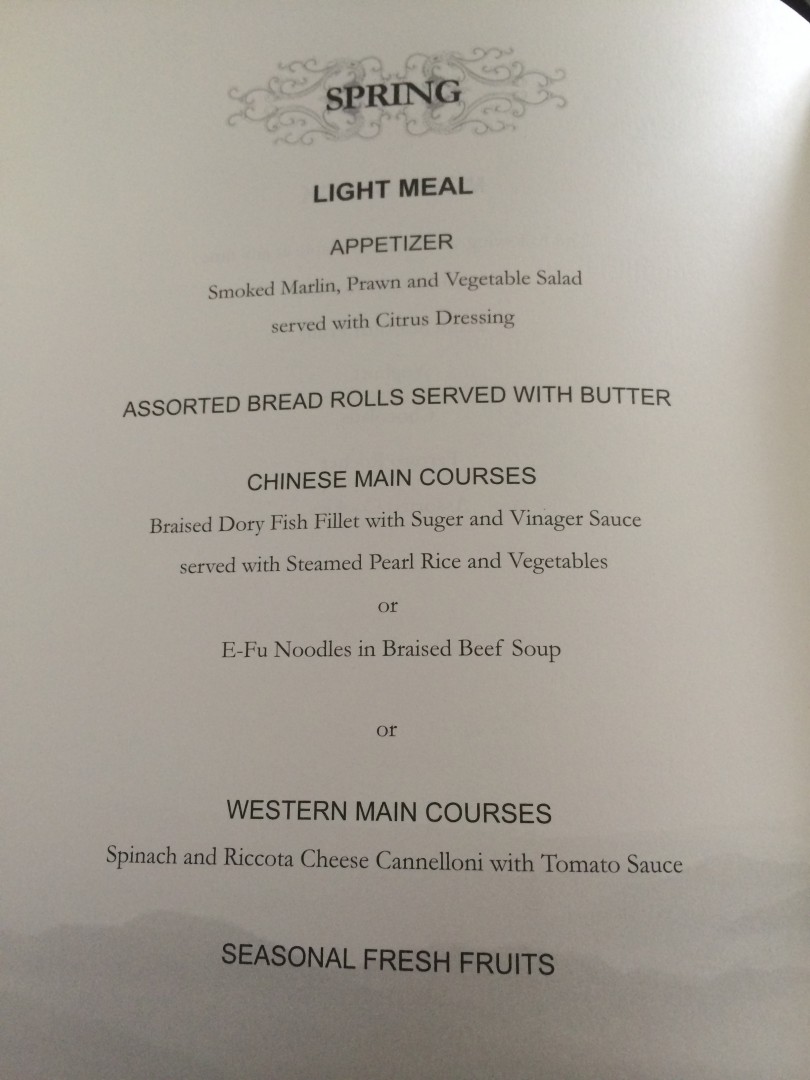 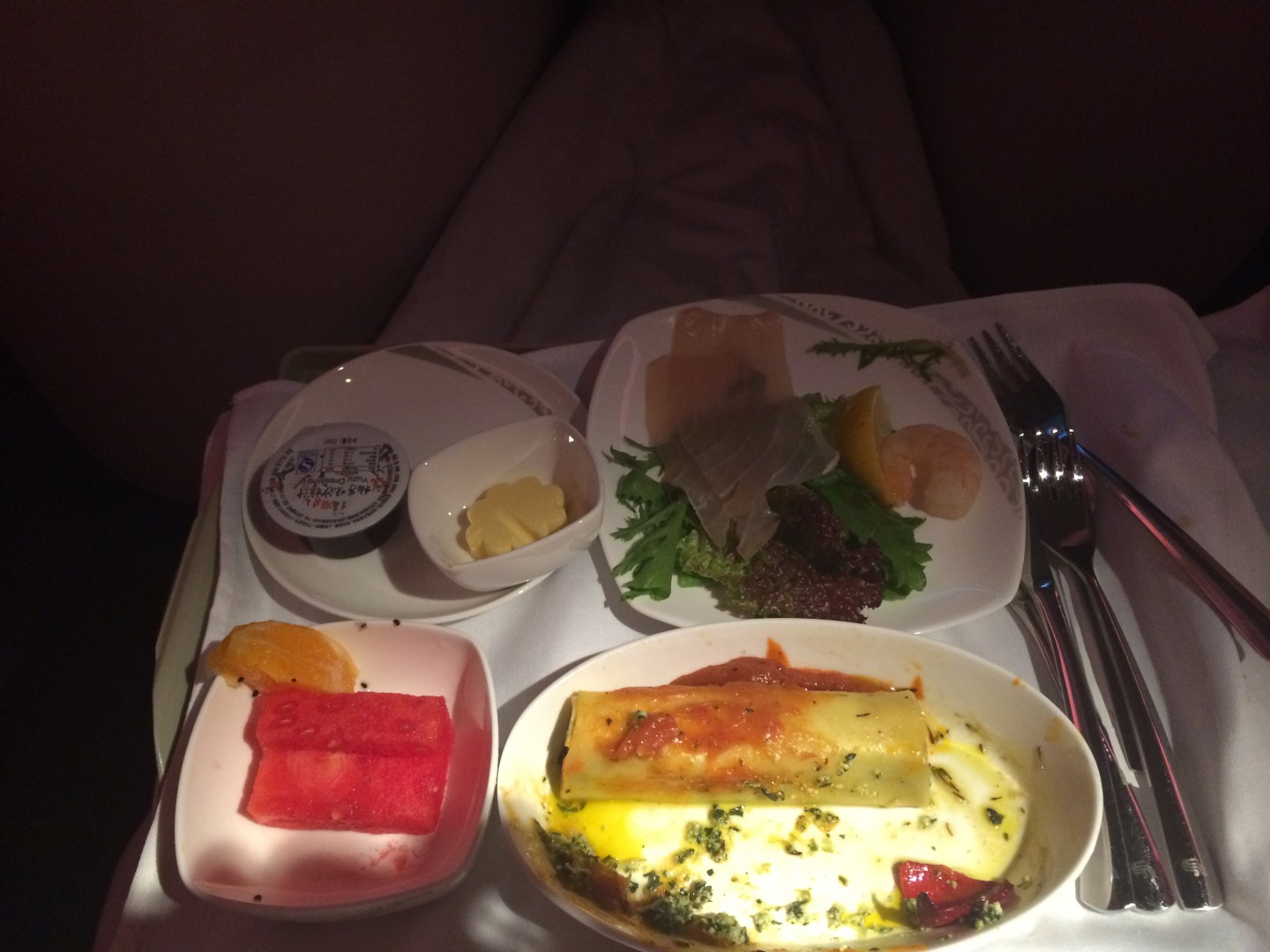 The almost 14 hour flight went by quickly and I was able to sleep well in the 180 degree lie flat business class seating.  I would say that Air China compares well to airlines as a whole and in particular to US based carriers.  However I think other Asia based airlines such as Cathay Pacific have a higher quality product.  That said, if you give me some good food, drinks and lie flat seating, I am usually a happy guy.  In my final article I will give an overview of what I learned in my first trip to Mainland China and give you some advice for those planning the same.