This article is the fourth in a series on my month long trip to Ibiza for the closing parties and Amsterdam for the Amsterdam Dance Event.

The next morning I was woken up by my cell phone ringing: It was my friend Andres and he was in the lobby!  Fresh off of his birthday celebration from the night before in Rotterdam, he looked a little worse for wear.  I didn’t object to eating a Doner Kebab and then taking a nap for a few hours.  When we woke up later, we decided to hit the ground running by going to the Luciano & Friends Closing Party at Ushuaia. 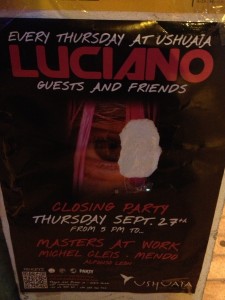 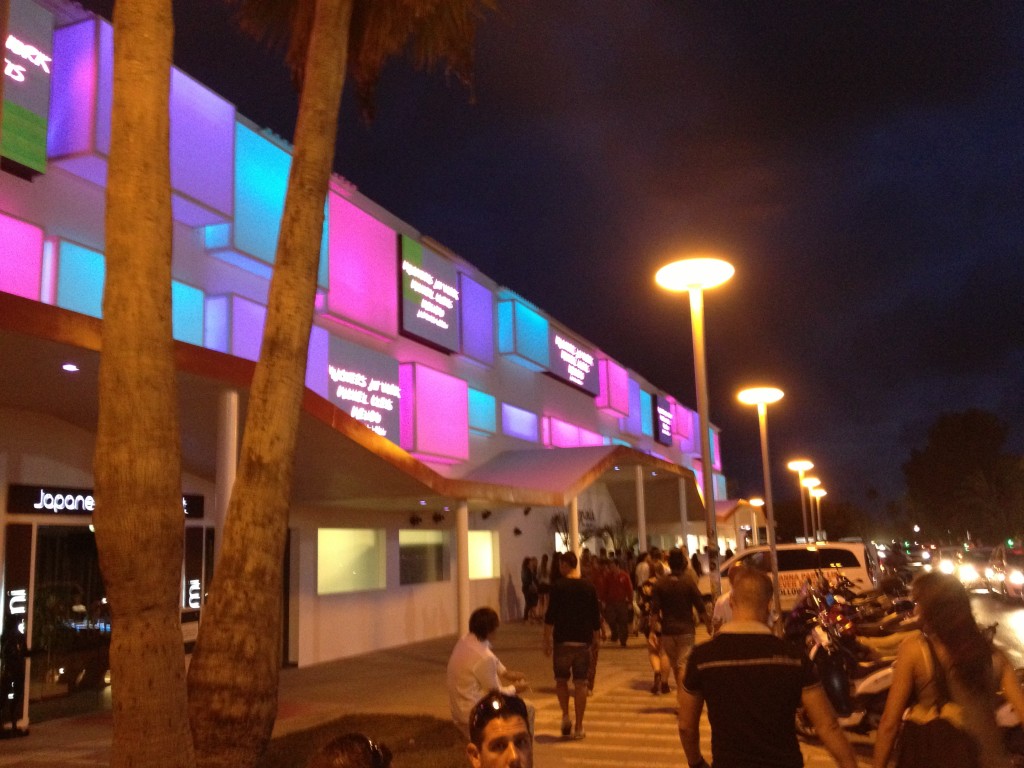 This venue just got really popular last year and it is impressive!  It is an outdoor space surrounding a pool with a massive courtyard packed with people. 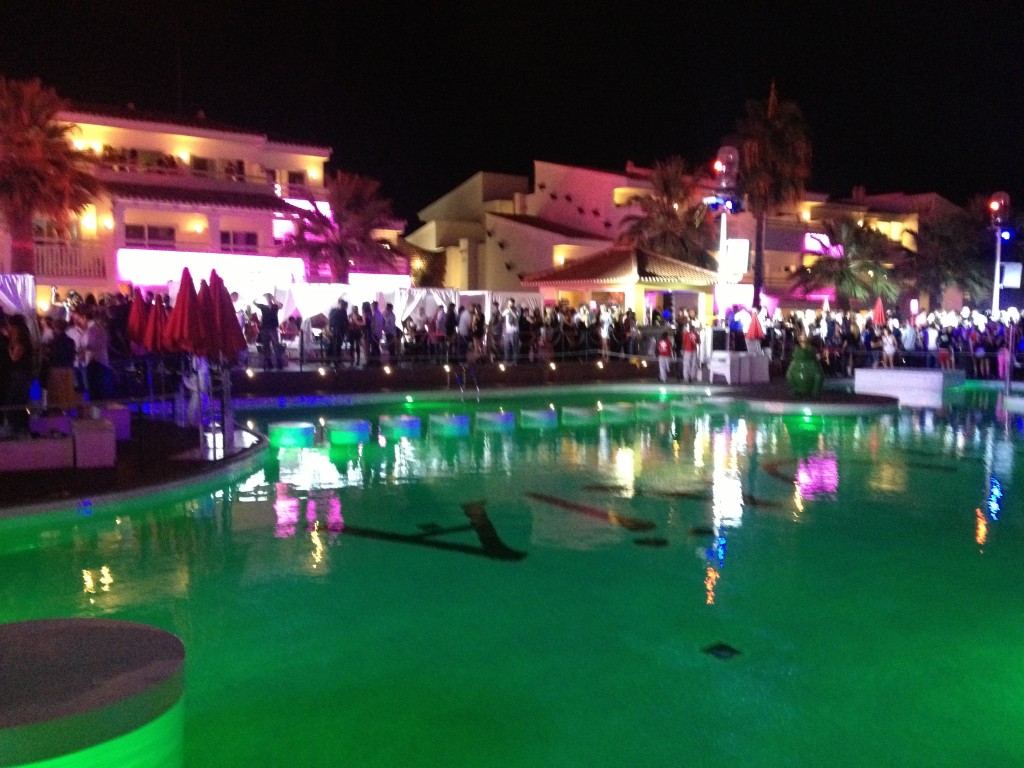 The production level was very high with it almost being a festival type of stage setup and thousands of people. 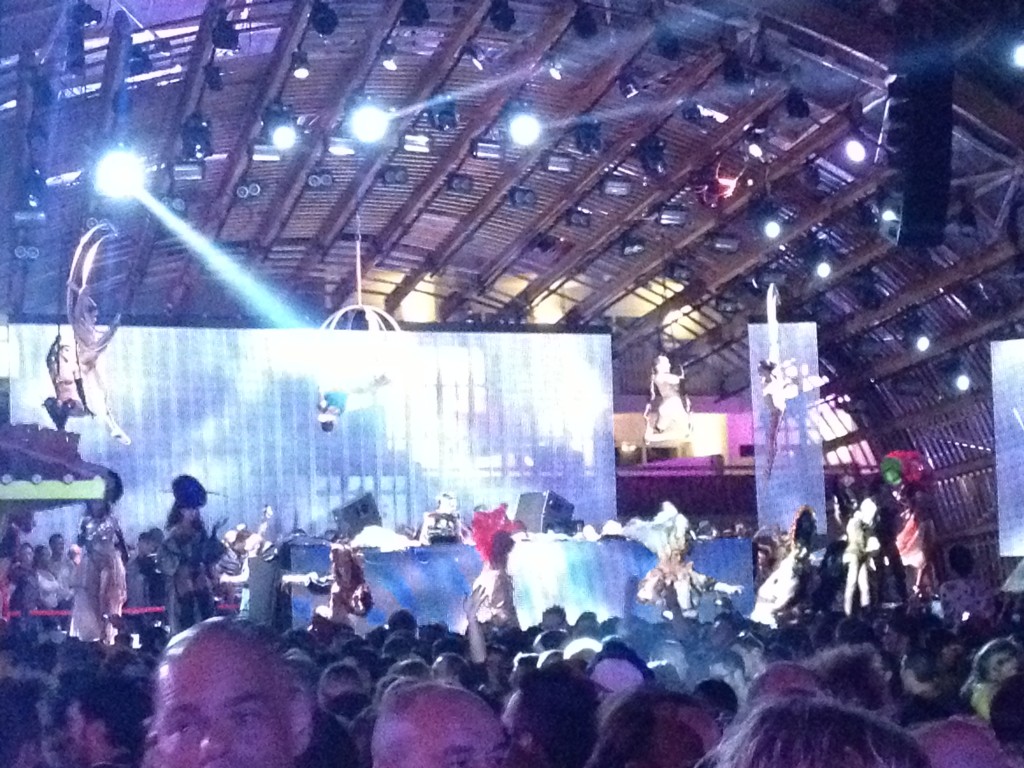 We also met up with this awesome couple from Vancouver that I had met the night before at Space. 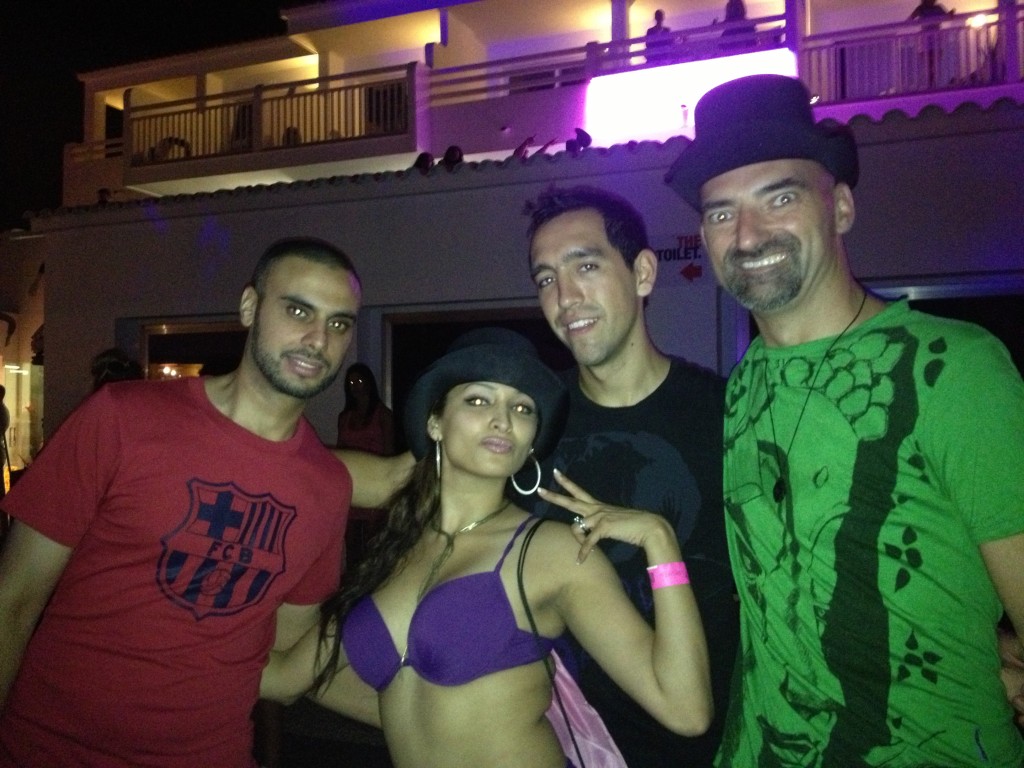 In usual Vagabundos form, they handed out top hats to all of the partiers at one point during the performance and we came home with a few.

This party went from 5 PM until midnight, but then it was time for the Hot Creations closing party at DC-10! The lineup was stacked with Deep House talent such as Jamie Jones, Miguel Campbell, Solomun, and Cassy. 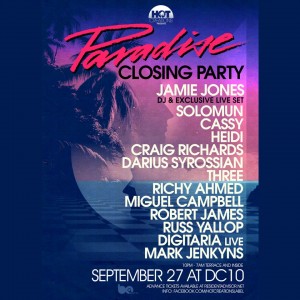 Here is a video of Jamie Jones getting funky.

It was here that the first of many “Small World” moments happened.  We are dancing on the terrace when I hear “Hey, It’s John Butler!”  I turn around to see none other than my friends Jamie and Marisela from Miami! 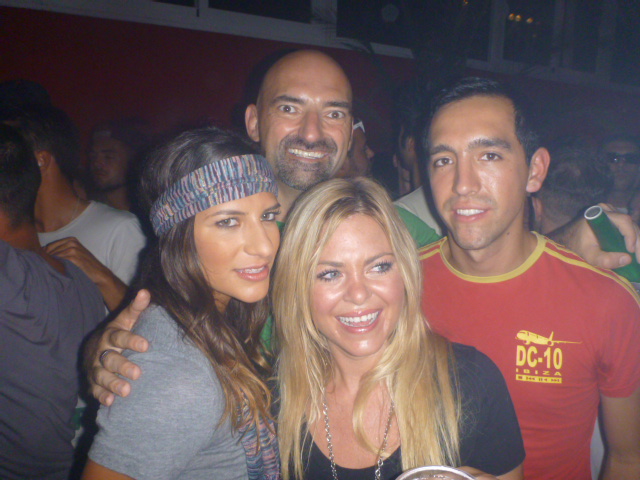 I had no idea they were even going to be in town! We ended up dancing with them for a while and had an amazing time.  We also met these cool girls from L.A. of all places and hung out with them a bit along with the Vancouver people. 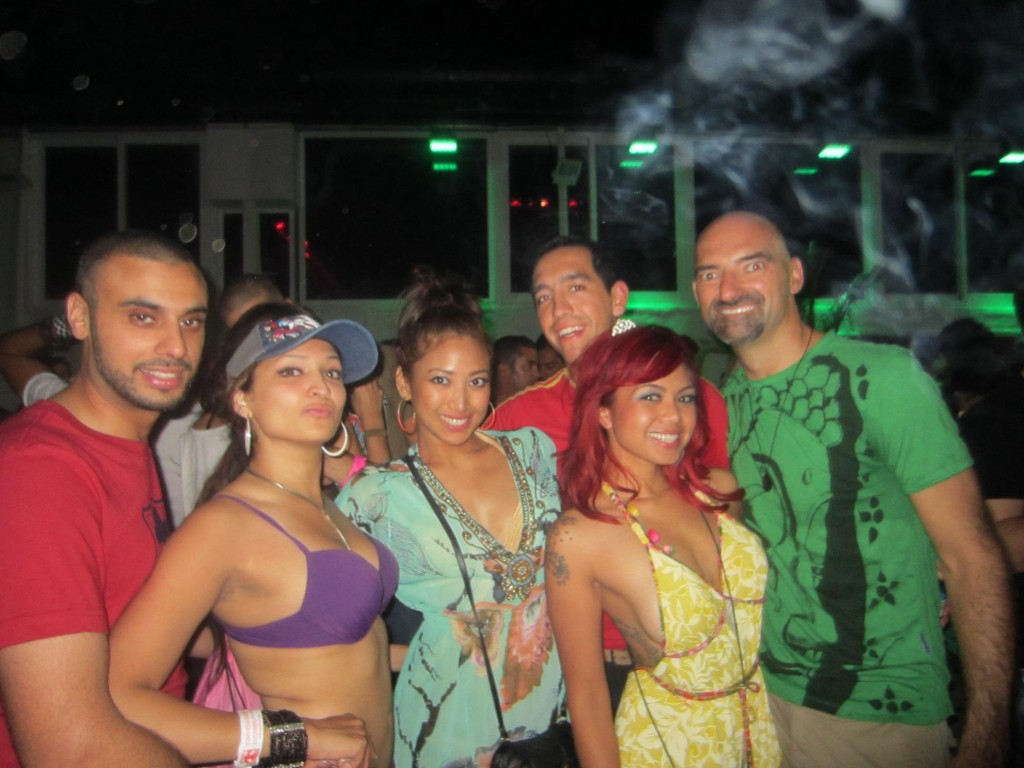 We also ran into Amanda from Miami and her boyfriend Ben, who live in London now, another completely expected treat. 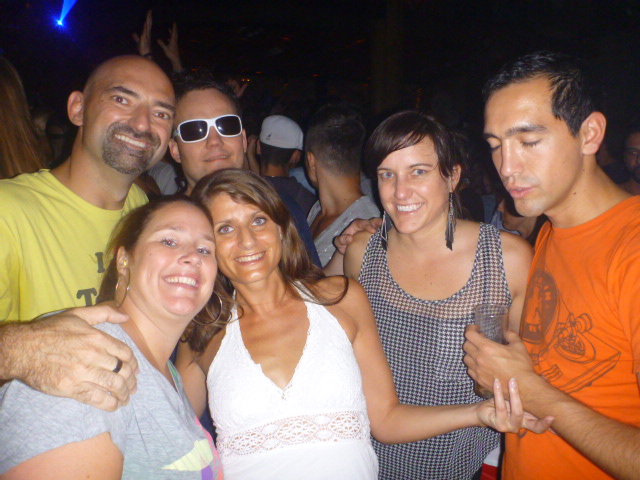 When the party ended about 7, we found our way back to the hotel and crashed out.

Friday was one of the days I was most looking forward to, the Marco Carola Music On Closing Party at Amnesia. 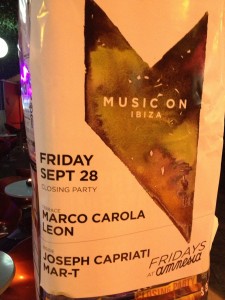 We got there a little late, but got to see a lot of Joseph Capriati’s set and were there in time to see Marco start spinning at 4:30 a.m.  After spending some time in the throngs of people, we found a secret (well not so secret) dance platform where it was much cooler and we had more room to move. 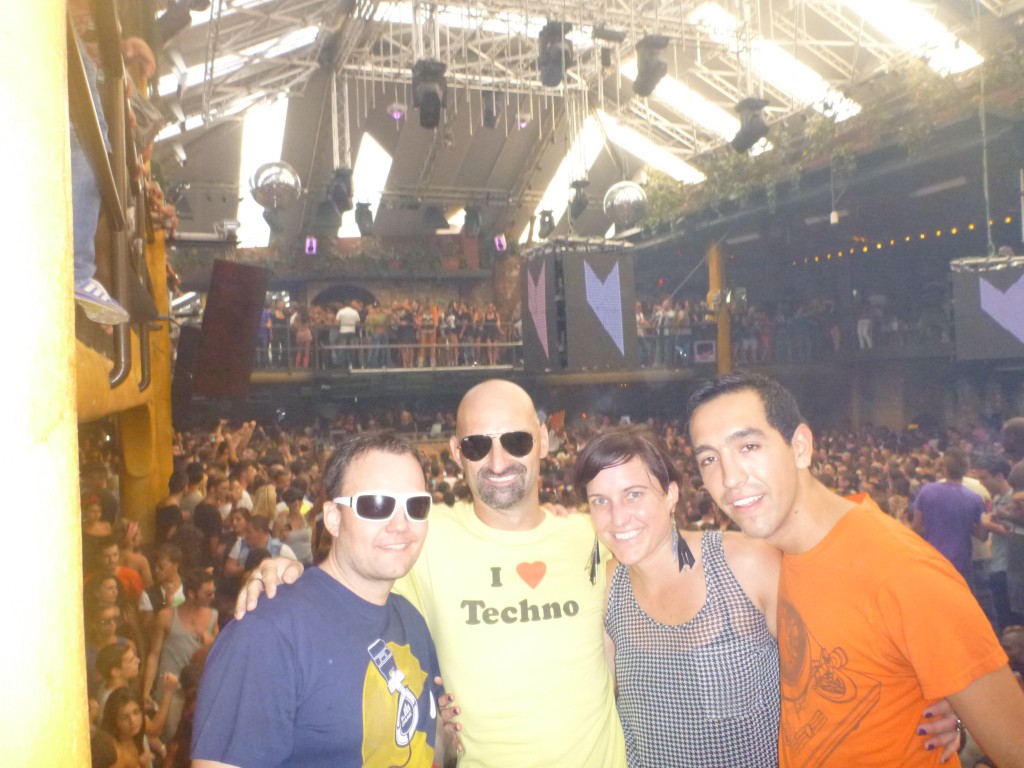 It was here that I had my second small world moment when I saw someone from the upstairs VIP balcony frantically motioning for my attention.  It was none other than my friend Nicolas from Miami who I didn’t even know was in town.  Thanks to some creative VIP band dropping from the balcony, I was able to go upstairs and see a bunch of folks from Miami including David Diego who had been in Ibiza for the season.  It was so great to see these guys so far from home! 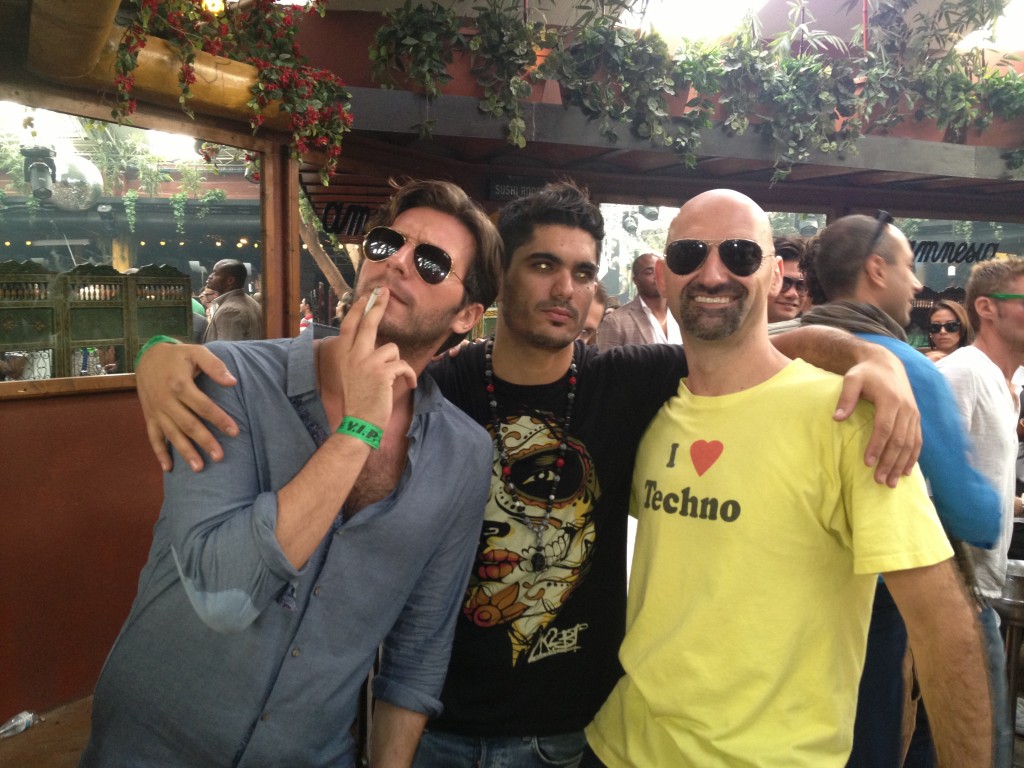 Marco ended up spinning until almost noon (I felt like I was back home at Space in Miami :D) finishing with the classic track “You spin me round”!

But I heard two of my favorite words mentioned while I was in VIP: After Party. There was an after party at a place called La Plage on the sand.  Were we interested? Oh Yeah! We went back to our hotel, changed into beach gear and headed over.  As we approached the spot, we knew it was looking like a good time. 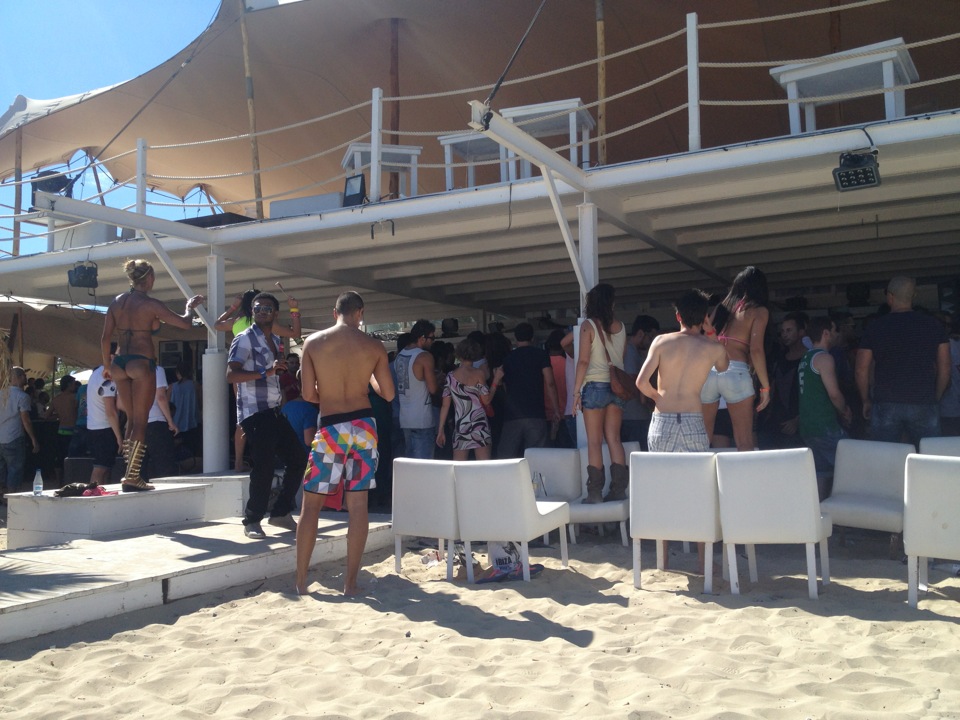 20E cover to see the same DJ we had paid 50E for the night before in a much more intimate setting. There I again ran into David and Nicolas who worked some VIP magic to get us in the much less crowded area where everyone seemed to know everyone else. 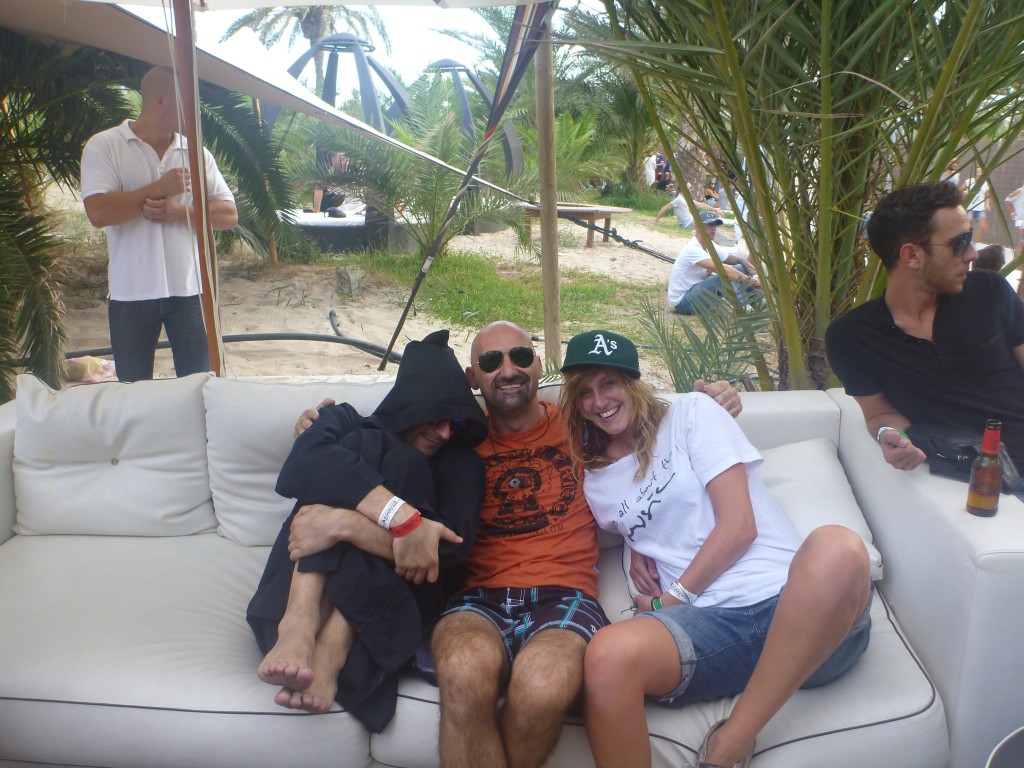 Marco ended up spinning another 12 hours of minimal techno sounds making it a marathon 20 hour session when included with the time at Amnesia. And I heard he went straight from that party to a jet to spin at Timewarp in Italy. What a machine!

Andres bowed out early, but I was transfixed by the minimal sounds so I ended up meeting some amazing people and stayed until the end of the after party at midnight.  I then headed back to the hotel and crashed.  We had had plans to go to the animal themed Zoo project that afternoon, but as they say in Ibiza: “It is great to have plans in Ibiza, but things don’t always go as planned here.”