This is the seventh post in a series about my 2013 trip to Ireland, Scotland and Great Britain. Part of the free plane tickets were funded by the 40,000 point sign up bonus of the Chase Sapphire Preferred card.

While I love having nice leisurely trips where I have plenty of time to see and do everything I want to this isn’t always possible. My Dad and I only had a 13 hour layover in Brussels and we were going to try and see as much as we could in that time! We arrived at 6 AM and headed to put our hand luggage into one of the lockers at the airport.  Our main luggage had been checked all the way through to Dublin which was convenient, but I still didn’t want to lug a backpack around as we would be walking a good deal.  We were able to buy train tickets into the city using a Platinum Business American Express with the smart chip.  We just missed the train departure so we had to wait another 15 minutes to catch the next train.

Brussels Central is actually quite close to the airport and we actually started chatting with some locals and missed our train stop!  We got off a few stops late and took the other train back the other way.  It would have been a fast trip if that wasn’t the case.  Once we got to Brussels Central, we just kind of came out of the train station and started wandering around.  I noticed a statue of King Albert up on a hill which we walked towards. He is kind of a big deal in Brussels 🙂 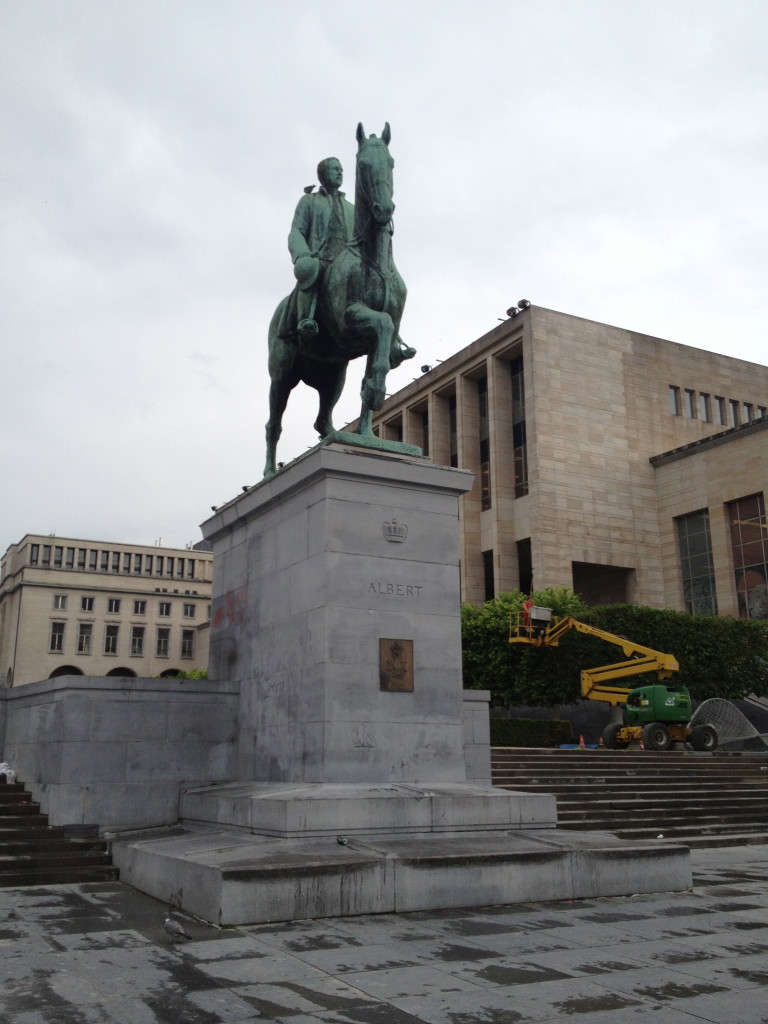 We stumbled onto the beautiful Mont des Arts. 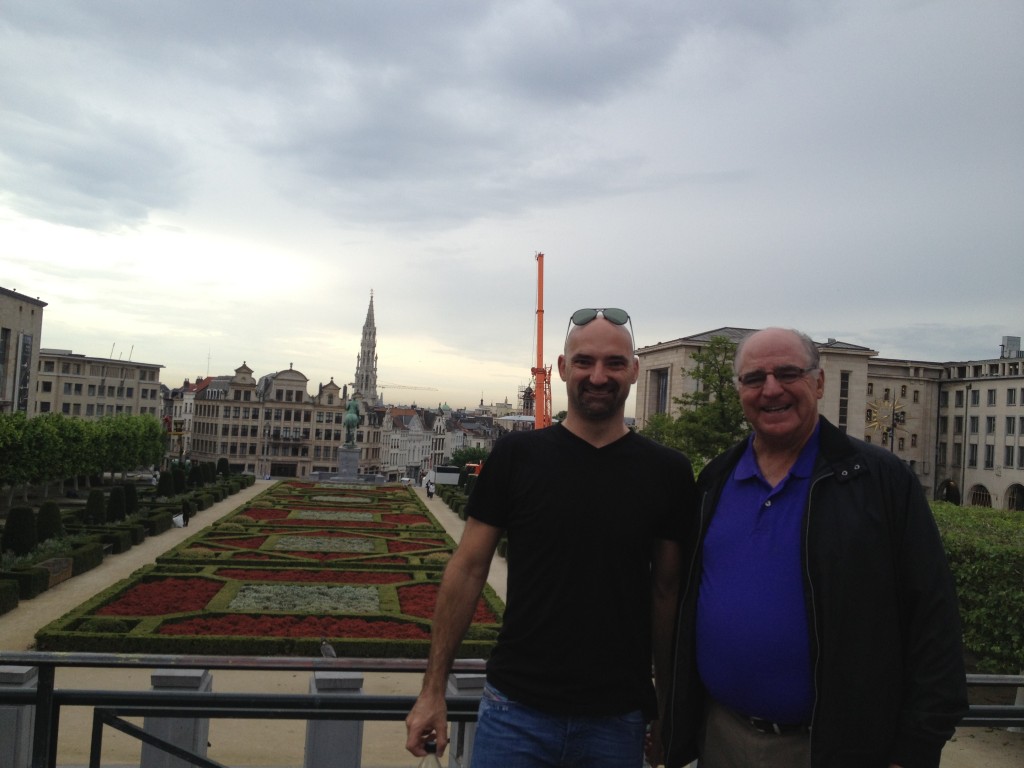 I loved the architecture here! 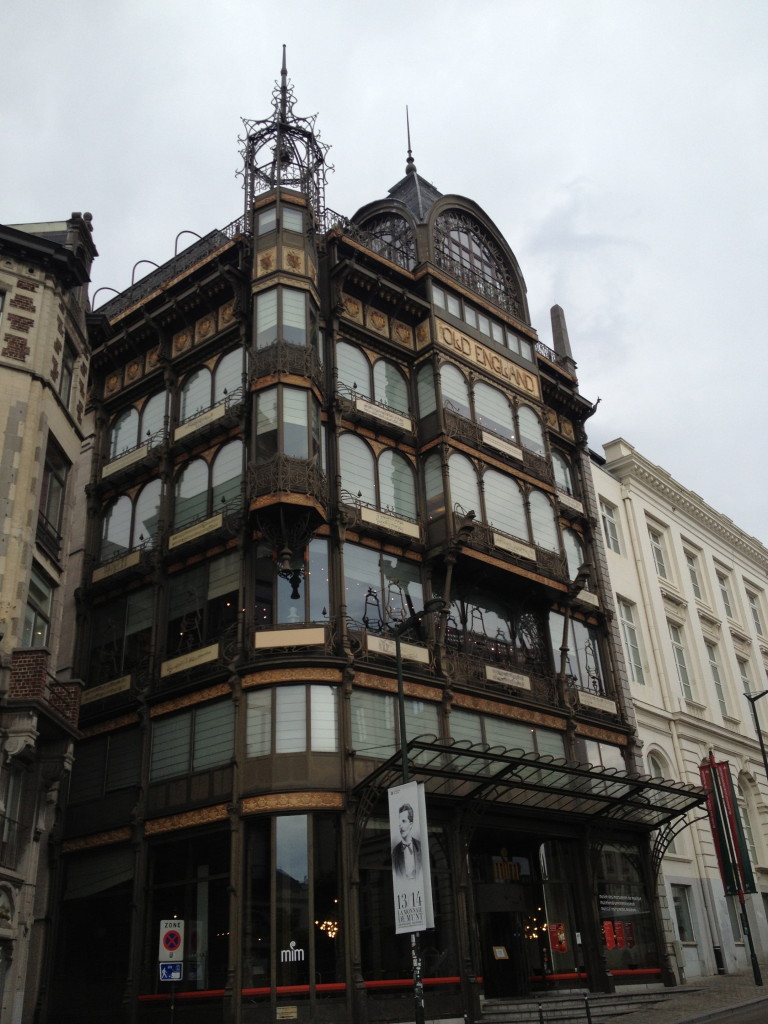 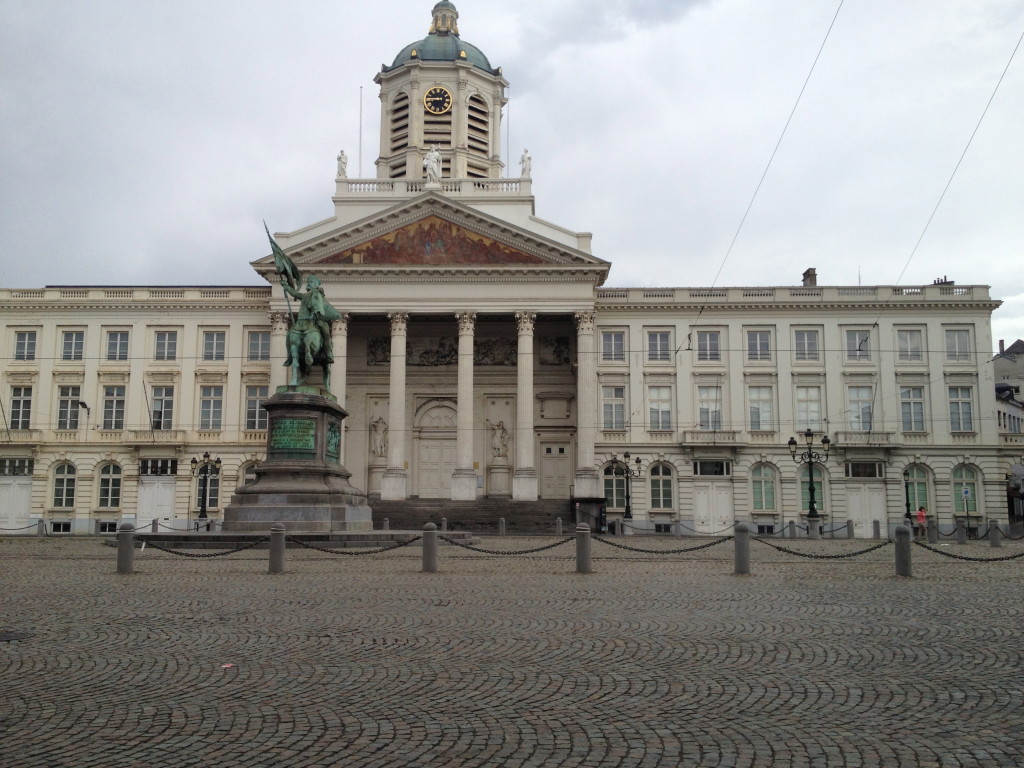 Then around the corner we saw the Royal Palace of Brussels 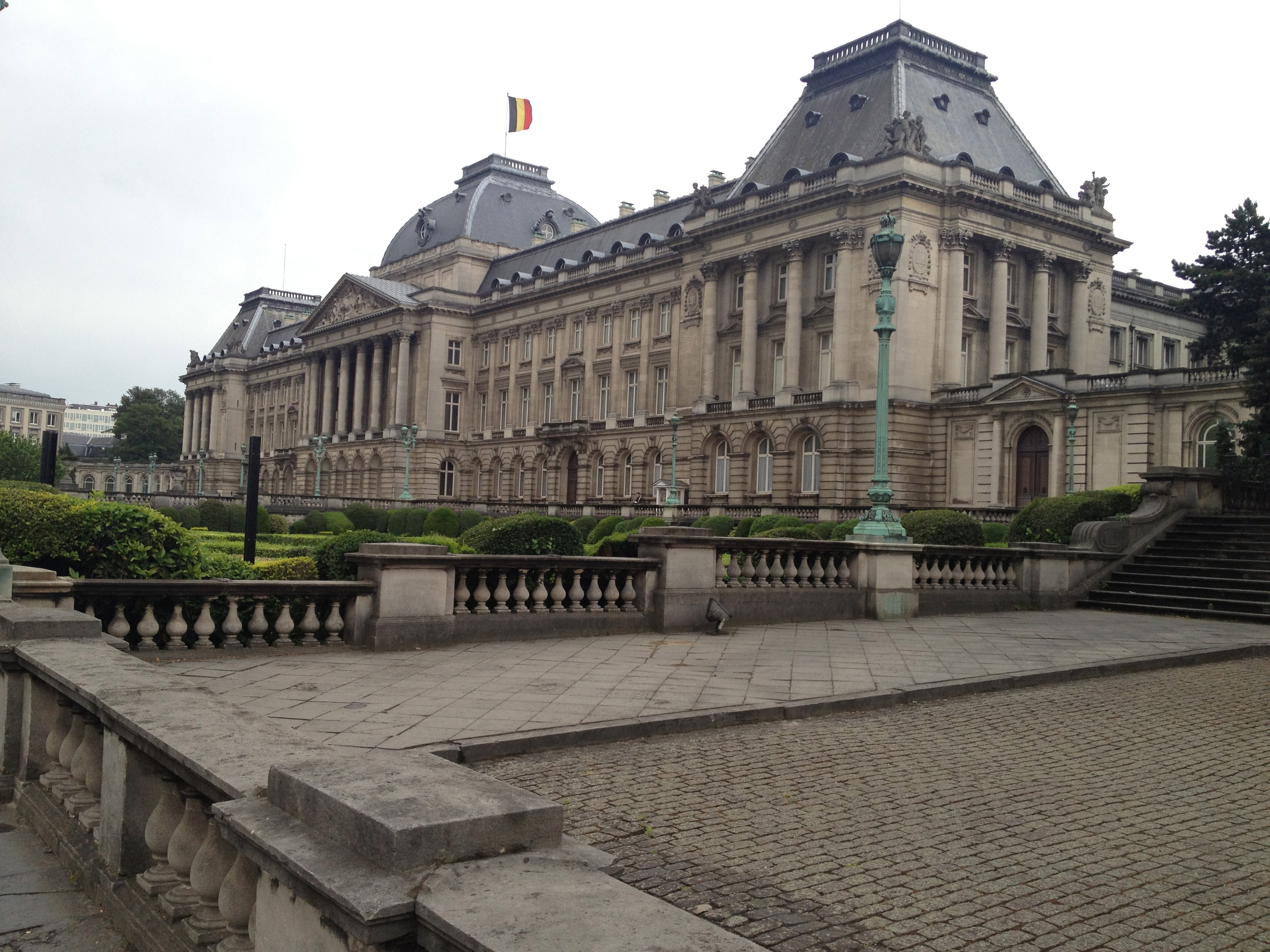 We then took a stroll through the Royal Brussels Park. 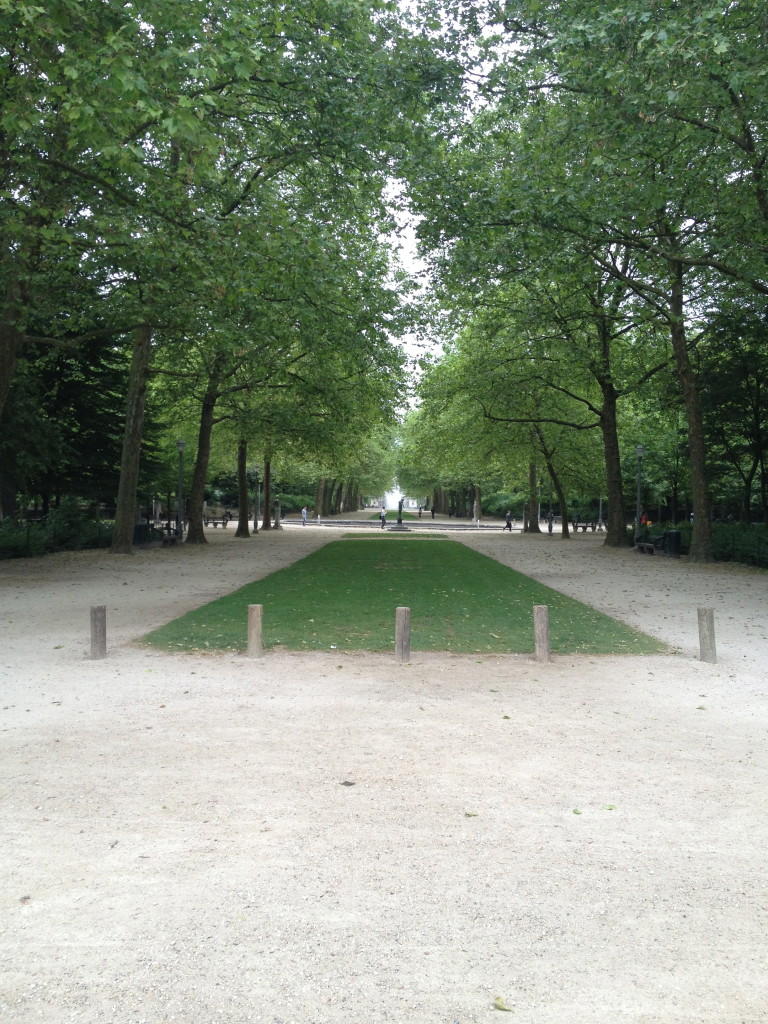 By the time we were done with this, it was near 11 AM and time to hit some of our central tourist goals for our time in Belgium:

I decided the best place to accomplish these tasks would be Grote Markt, which was listed as one of the must see areas of Brussels. The Brussels City Hall is the centerpiece of this plaza. 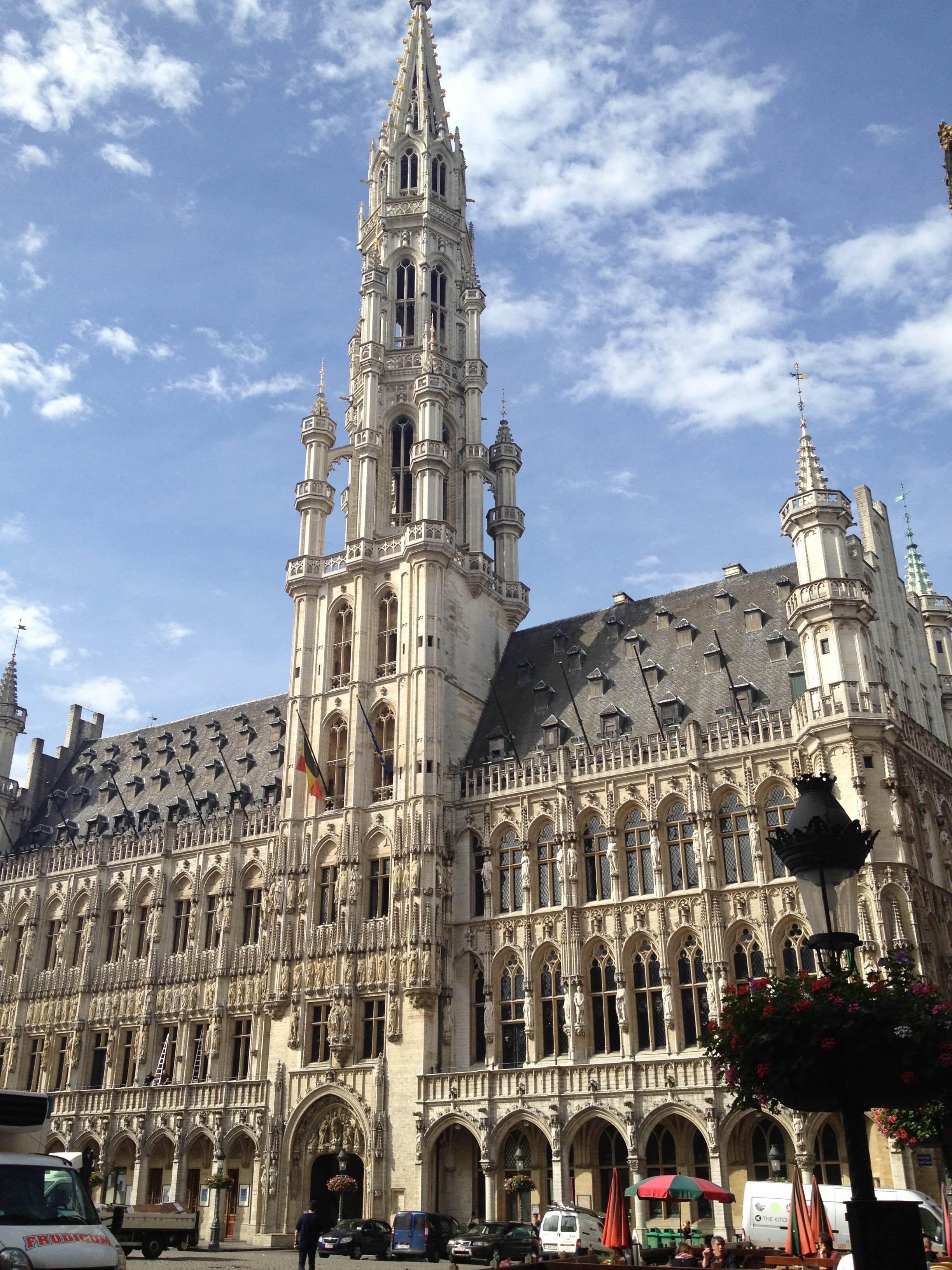 We found outdoor coffee shop right next to it where we were able to have lattes and order our waffles drizzled in chocolate.  Our waiter wasn’t the best, but we were soaking up the ambiance  and met a really interesting local couple next to us who told us more than we ever wanted to know about water.

Two goals out of the way we went to work on the third but were caught in a sudden downpour of rain on our way to see the famous Manneken Pis. 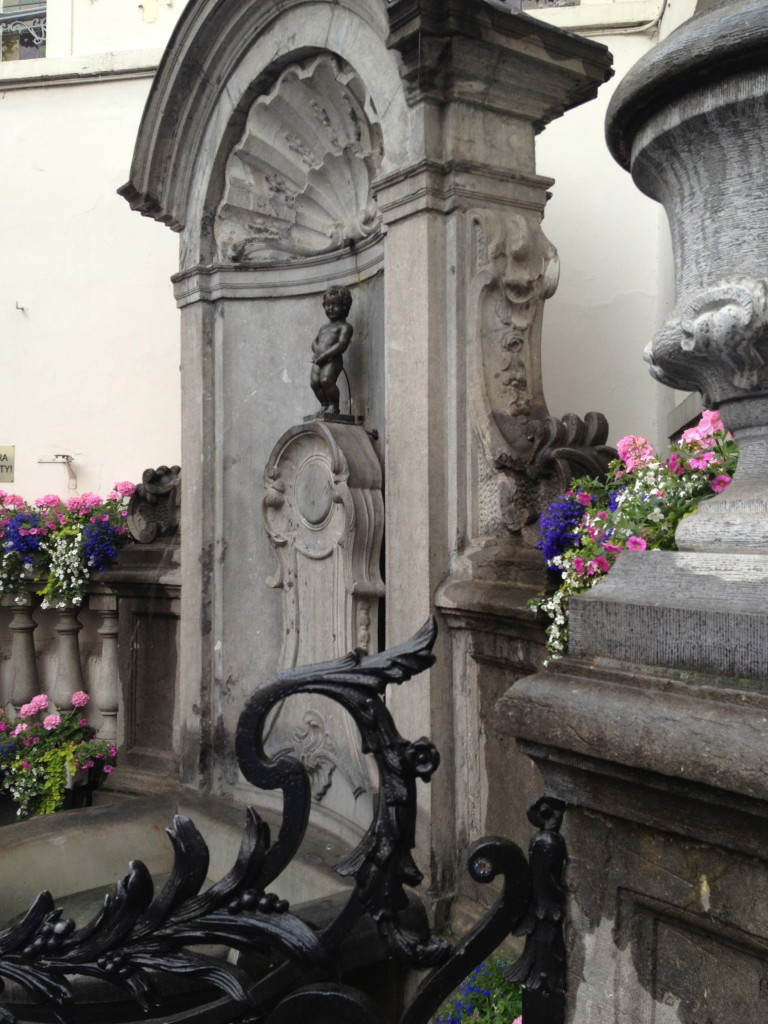 Luckily for us there was a great little pub right across the street that gave us our fix of Belgian beer (and other European goodies). 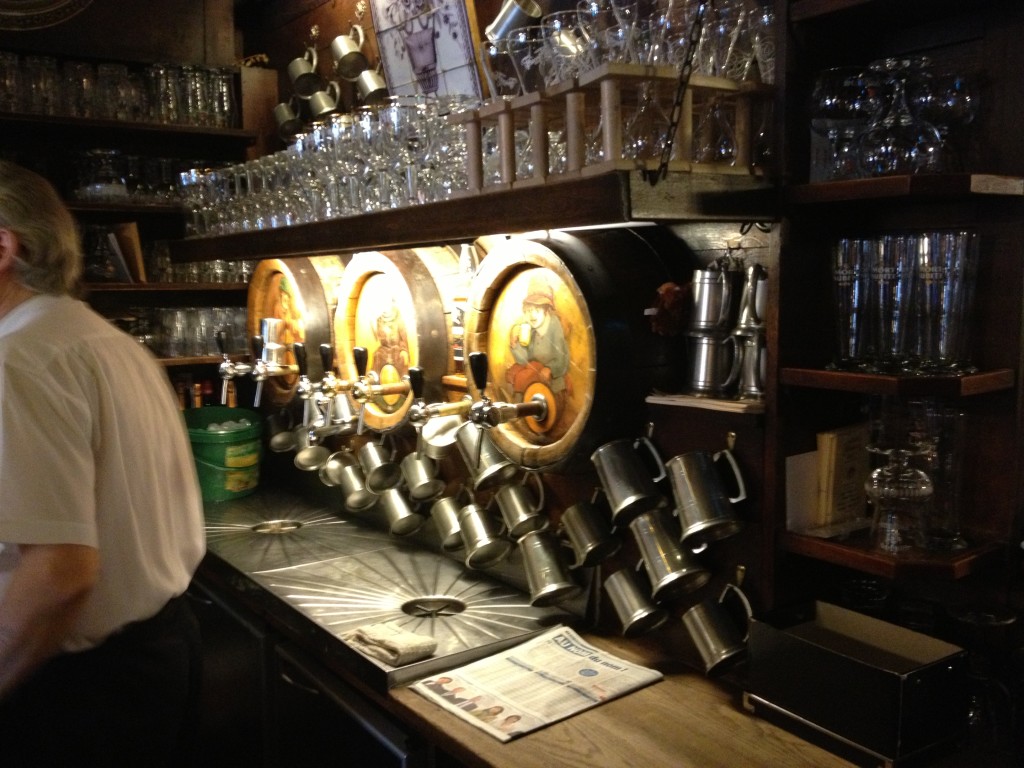 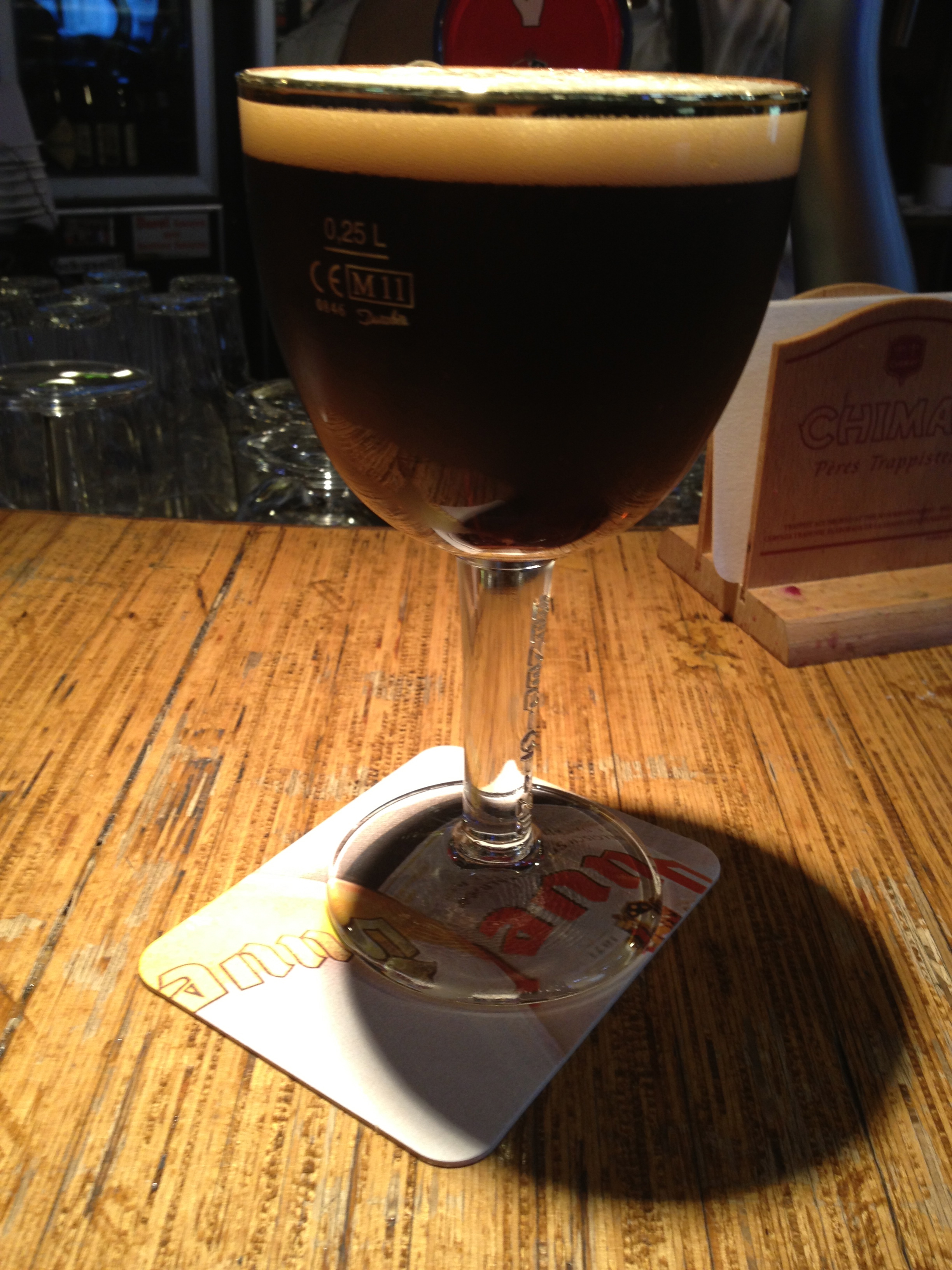 Two delicious beers later the rain had stopped and my Dad wanted to head to the aeronautical museum.  We took the scenic route via Cinquantenaire Park. The Cinquantenaire Arch was impressive.  It was planned in 1880 to commemorate the 50th anniversary of Belgian Independence. 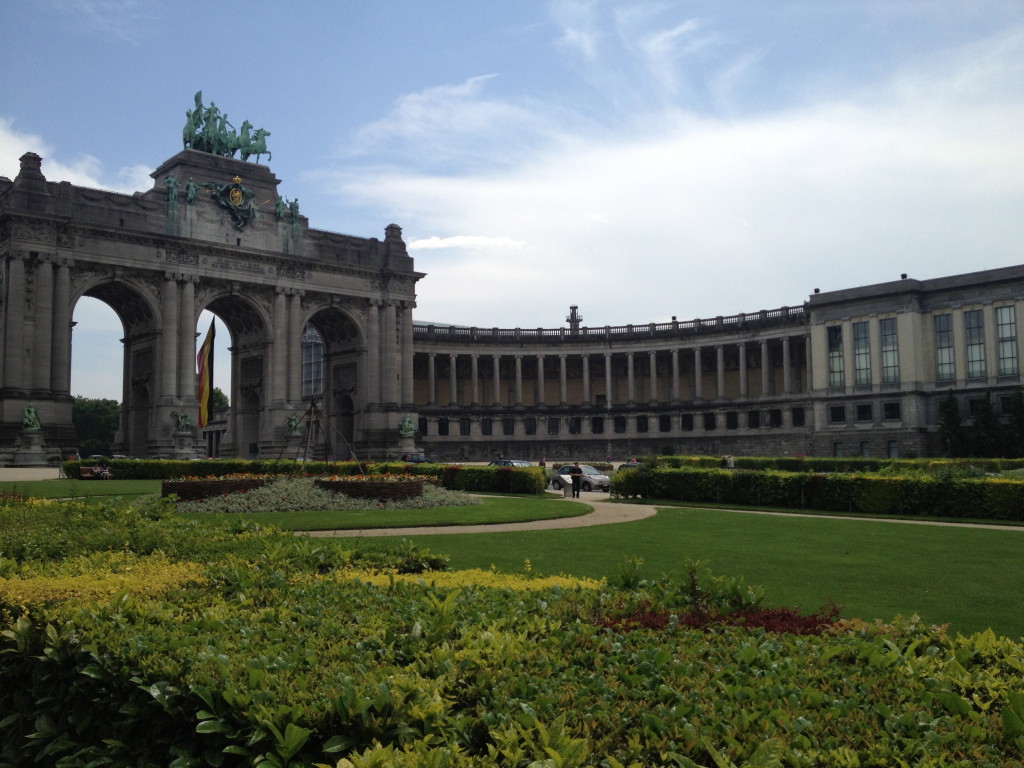 We finally arrived at the Aeronautical Museum and since my Dad was previously a pilot, it was right up his alley. 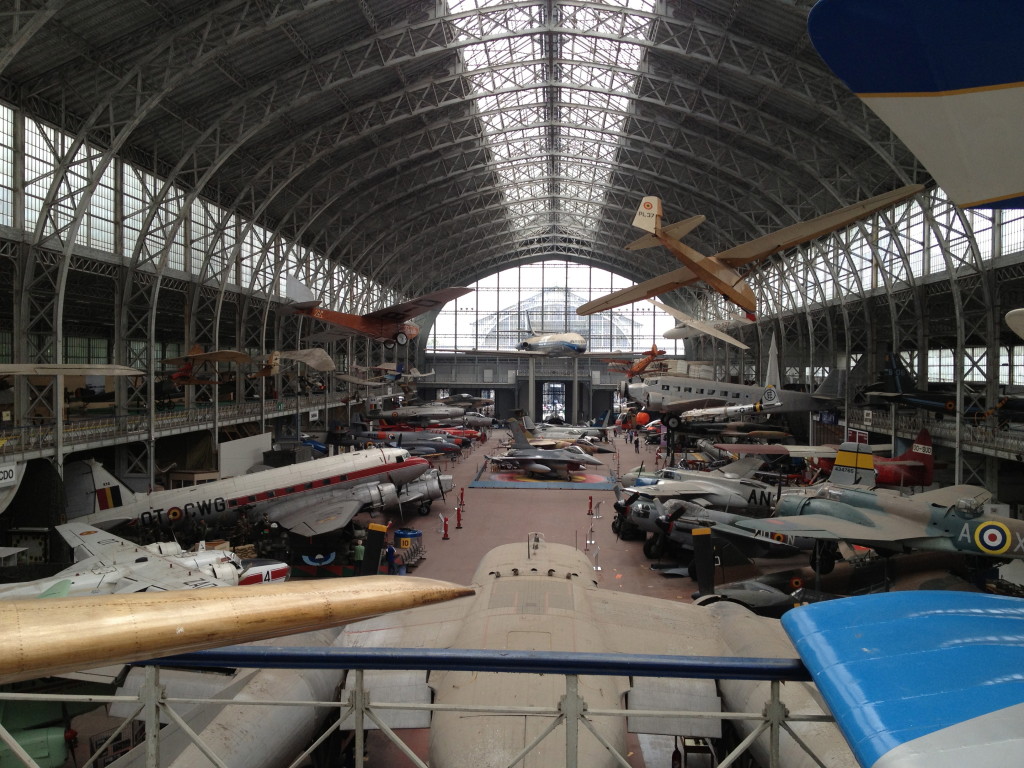 We spent several hours checking out the planes and then we both decided to throw in the touring towel and find somewhere to sit and eat.  We had asked the local we met near the Grote Markt for a good place to eat and he recommended the Rue des Bouchers which is a little pedestrian street lined with cafes. 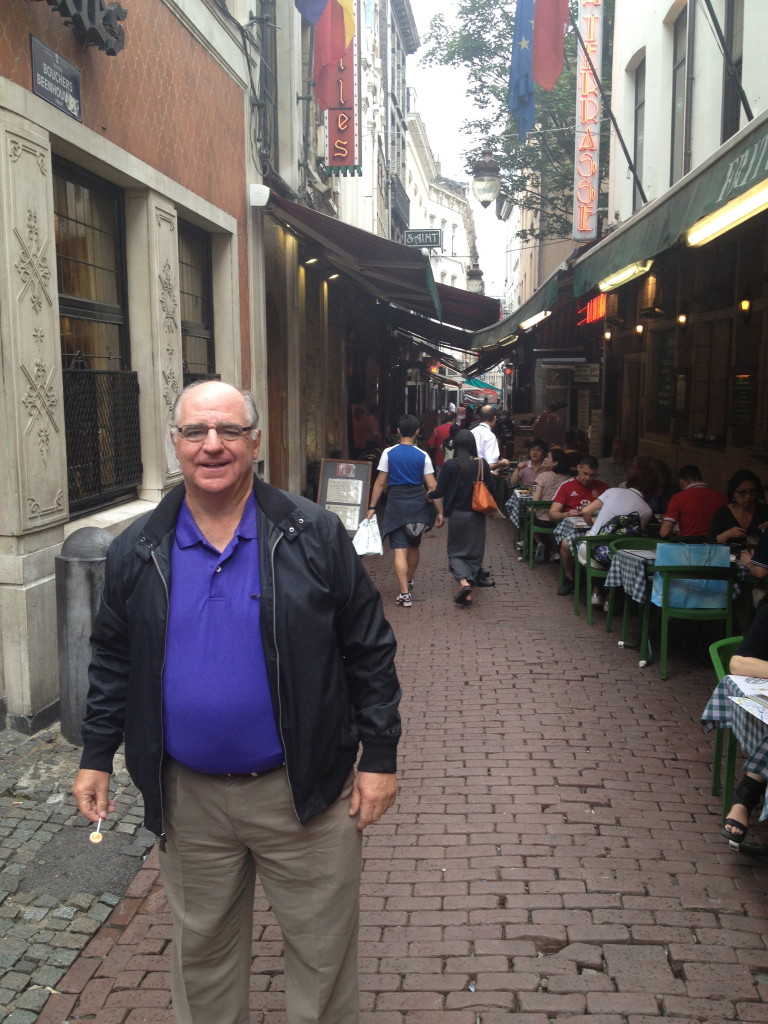 We ended up at Chez Leon which is one of the recommended places on Wikitravel’s Brussels section, which I have always found to be a good reference. Evidently Brussels is known for their mussels and they were on every table around us.  I got the spaghetti with mussels and it was awesome! 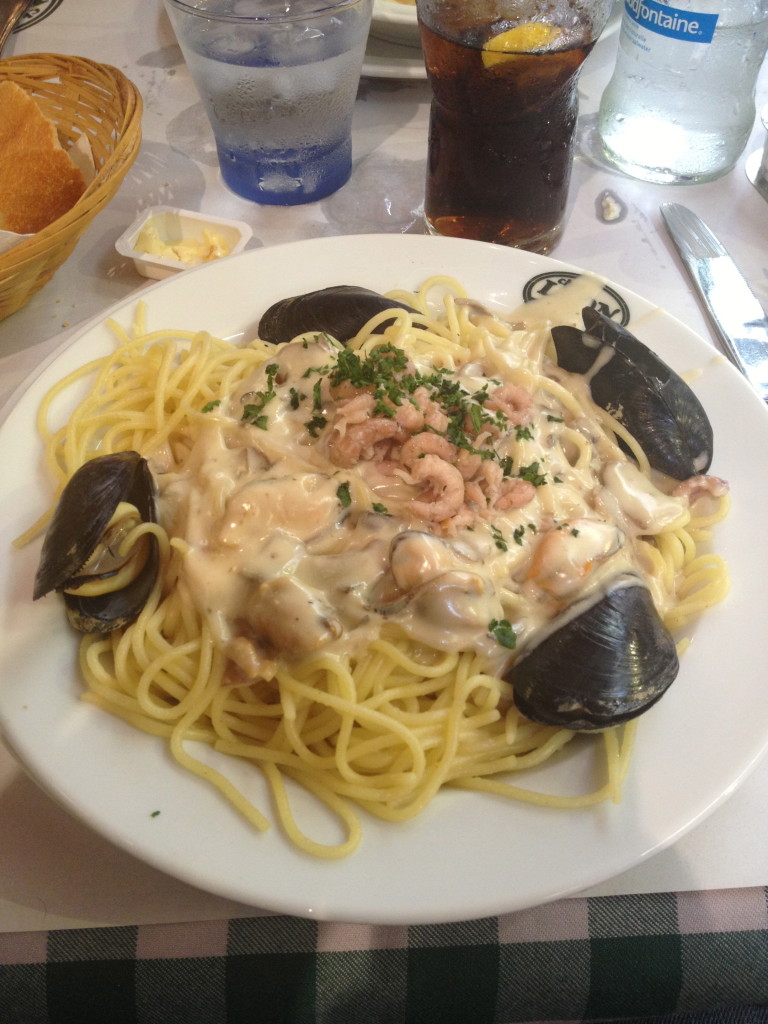 After we ate we headed back to the train back to the airport and hung out in the Lufthansa lounge until it was time for us to board our quick flight to Dublin. 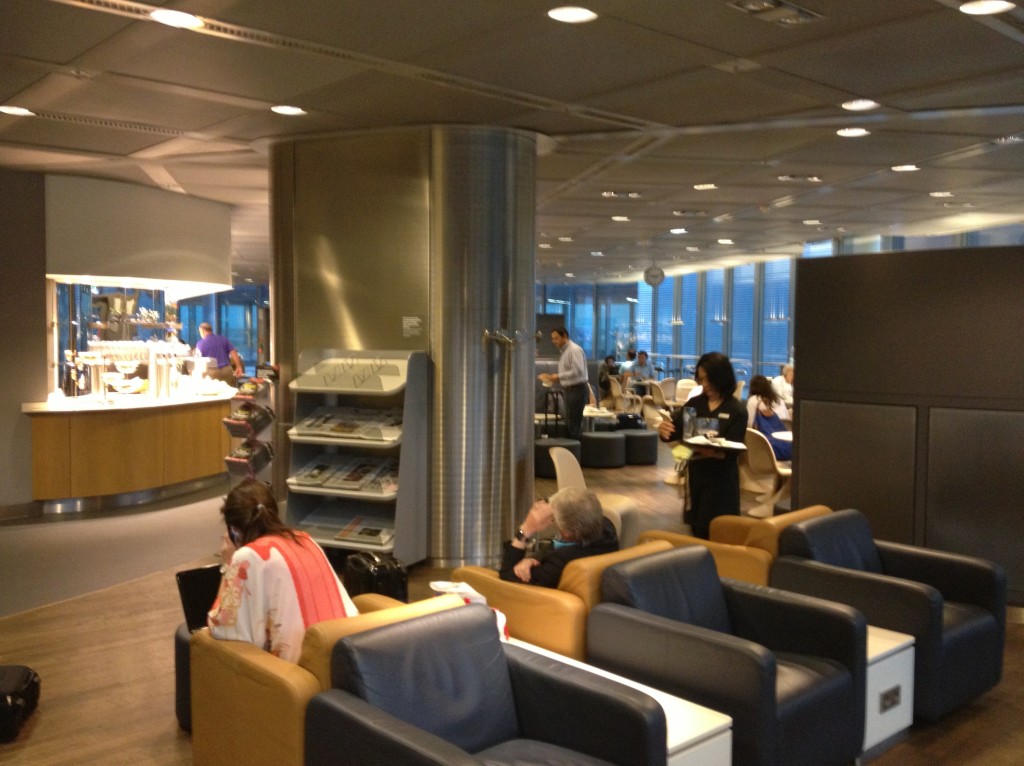