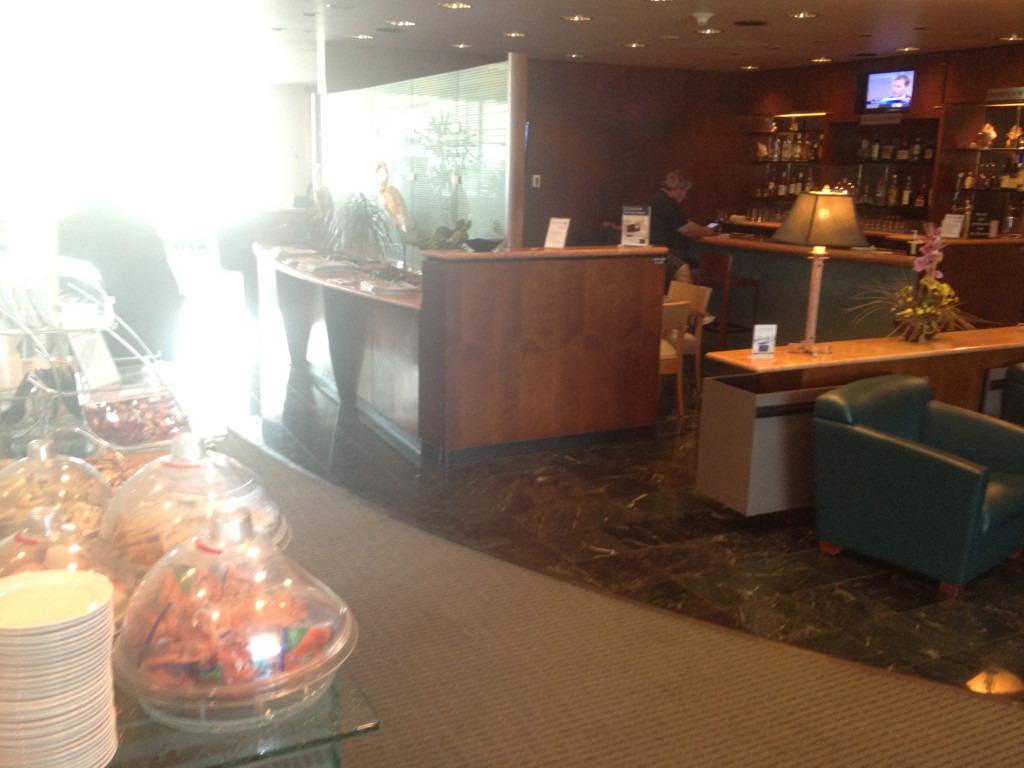 This is the third post in a series about my 2013 trip to Ireland, Scotland and Great Britain. Part of the free plane tickets were funded by the 40,000 point sign up bonus of the Chase Sapphire Preferred card.

I had a quick layover in Orlando and was able to check out the United Club Lounge while I was there.  First off, I wanted to talk about Lounge access within Star Alliance.  Lounge access is one of my favorite things about flying in premium cabins due to the free wifi, snacks and alcohol.  I was on the first leg of a convoluted itinerary that would take me from Ft. Lauderdale to Orlando to Charlotte to New York to Brussels to Frankfurt to Dublin.  Whew!  I had built in a 15 hour layover in New York to ensure that we didn’t miss our international connection and also to maybe see some sights around the JFK area.

I am somewhat famous for missing my flights but this time I was meeting my Dad in New York so I arrived at the Fort Lauderdale airport two and a half hours before my flight.  I wasn’t sure what the lounge situation would be in my terminal but I was happy to see a United Club lounge since my itinerary was booked with United miles.  I waltzed into the lounge and produced my First Class tickets (although they were on the Star Alliance partner US Air) and a quite surly woman at the front desk informed me that “This was a club lounge and they don’t have a lounge for First Class passengers.”  What?  I explained that my itinerary was booked all by United and was all in business class and first class and should have lounge access.  She informed me that since my flight wasn’t until the next day from JFK to Brussels that it was only before that flight that my lounge access would be available.  Bummer.  There are few things more disheartening that being turned away from a lounge when you are flying on a First Class ticket!

So off I sulked and immediately started researching what the lounge access criteria was for award tickets on another Star Alliance carrier. This wouldn’t be the first time that an airline employee had told me something incorrect. It turns out the old bat was right!   Evidently, domestic first class just isn’t good enough which is amazing for the price they pay!

So as I got to Orlando with another 2 hours before my next flight I saw a sign for another United Club lounge.  This one was designated Star Alliance Gold lounge, but I knew that the next day rule for lounge access still applied unless I have Star Alliance Gold status (which I don’t). But I am not afraid of rejection so up I marched with my two first class tickets in hand.  The guy at the entrance looked weathered but a bit more friendly than the shrew at the Fort Lauderdale location.  Armed with the information from the last encounter, when I saw that my flight coupon wasn’t scanning for automatic entry, I announced that I was on an international itinerary (which was true) and that it wouldn’t let me print my international boarding pass yet (also true.)  While he was checking who knows what on the computer I chatted him up about the weather and flight status and he ended up waving me through.

The lounge itself was sufficient with a staffed bar, Milano cookies and other snacks.  I had a couple of complimentary beers as I waited for my flight to Charlotte.  I normally like to wait as long as I can to get to the gate since the lounge is much more comfortable and today was no exception.  When I finally headed to the gate, I saw the bad news!  My flight to Charlotte was delayed an hour which meant I would miss my 50 minute connection to New York.  Since it was so late in the day, I knew that there weren’t any more flights to New York from Charlotte so I started to panic.  Visions of my Dad alone in New York trying to check into the hotel which was in my name came to mind…  There was a long line of people at the desk trying waiting to talk to the gate agent so I tried to call United while I was waiting because I know sometimes they can rebook you even faster than waiting for the gate agent.  The person on the phone gave me the bad news that there were no other flights and my alternative was to stay in Charlotte for the night! Ugh!  Luckily the gate agent about that time called out for anyone with a connection to New York to come up front and when I came up she told me they had rebooked me on an American flight direct to New York, but it was in coach class.  Well, beggars can’t be choosers so I hustled to make it to the gate on time and was finally on my way to New York.  I hope my bag gets transferred over right….