If you have read our ABC’s of Airline Alliances article, you know that you can use any airline in an alliance to book an award seat.  For example, if you wanted to book an American Airlines seat you could use American AAdvantage miles, British Airways Avios, Iberia Avios, or any other of the members of the OneWorld Alliance.  I end up with American miles from cards like the Citibank AA Platinum Personal MC and I can easily get British Airways miles by transferring them from my Chase Sapphire Preferred card or my American Express ® Premier Rewards Gold Card.

Why does is matter which I use?

Because it can save you a ton of miles!  The reason there is a big difference is that American uses a zone based system and British Airways a distance based system.  The American Awards use a flat rate based on what zone you are leaving from and flying to. Click here to see the American Award Chart or click here to see the American Partner Award chart which is slightly different.  You would use the first if you wanted to fly on American flights and the second if you wanted to fly on a partner such as Iberia or British Airways.  Under the standard American Award chart for domestic economy class travel, it is the same 25K miles to fly from Miami to Orlando as it is to fly from Miami to Seattle. 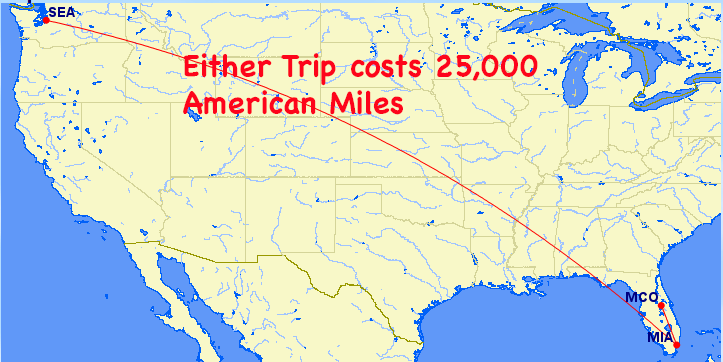 British Airways uses a distance based chart where the number of miles is tied to the distance that you fly.

Another example would be Miami to Cancun, Mexico which I used this year to attend the BPM Festival for only $70. This flight using American Miles from the North American zone to Mexico would cost 35K miles round trip.  With British Airways since it is only 531 miles to Mexico, it is just 9,000 Avios round trip!  That is a savings of 24,000 Miles for the exact same flights!

In general, if it is a short flight, BA will often times save you miles, but when in doubt, check both!  It will only take a couple of extra seconds but the reward could be huge.  You can use the following links to quickly see the difference.

American Airlines Partner chart (for flights on any Oneworld plane)

Earning miles is just one half of the Travel With Miles formula to seeing the world for free!  Being smart when you redeem your miles is another very important piece of the puzzle.  If you follow my advice and redeem the smart way then you will get more trips and more fun for your miles!