This is part 13 of a series on my trip to Austria, Germany and China.

I had read that Zhangjiajie was an incredible place to visit and was similar to some of the scenes in the movie Avatar.  So naturally I had to go check it out.  I arrived at night without a room and got one of the taxi drivers to take me to a hotel.  He first took me to a place that was about $80 a night but it didn’t look that nice and I knew there were cheaper places.  I also wanted to be closer to the train station in downtown Zhangjiajie.  He ended up taking me to a place that was super cheap at around $20 a night, but it was pretty gross.  Normally I like to stay in nicer rooms but it was near midnight and I didn’t want to keep driving around so I took it under the idea that I wouldn’t be in the room much (which was true).  The next day I walked around the corner to grab some food and groceries to take to the park with me.  I saw the tram that led up to Tianmen mountain and Heaven’s Gate which I was going to see the next day (so I thought). 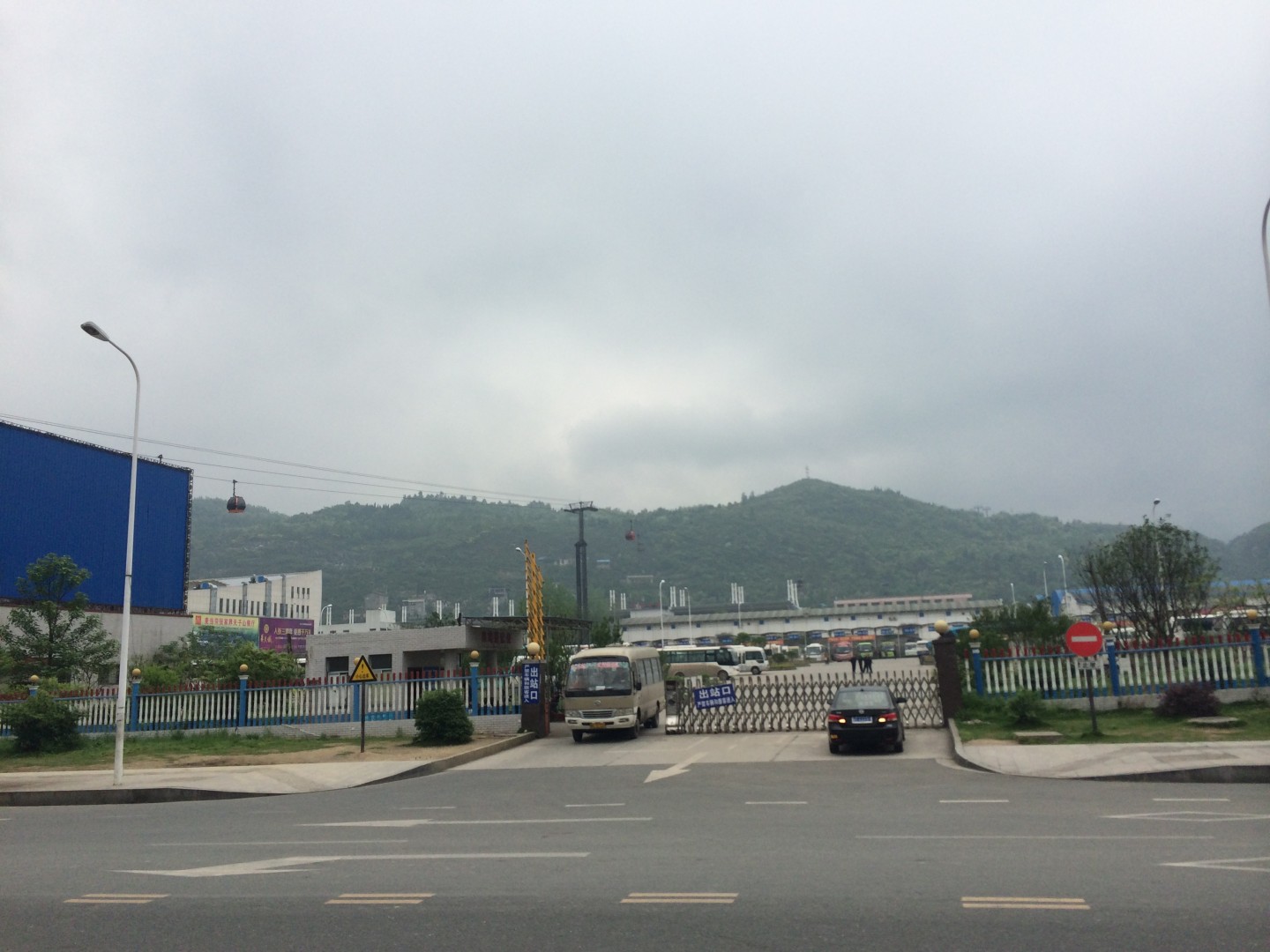 In the above picture, you can see the bus station where I caught the bus to the Wulingyuan Scenic Area. As I walked up to the National Park gates I immediately saw why the comparisons to the movie Avatar were made. 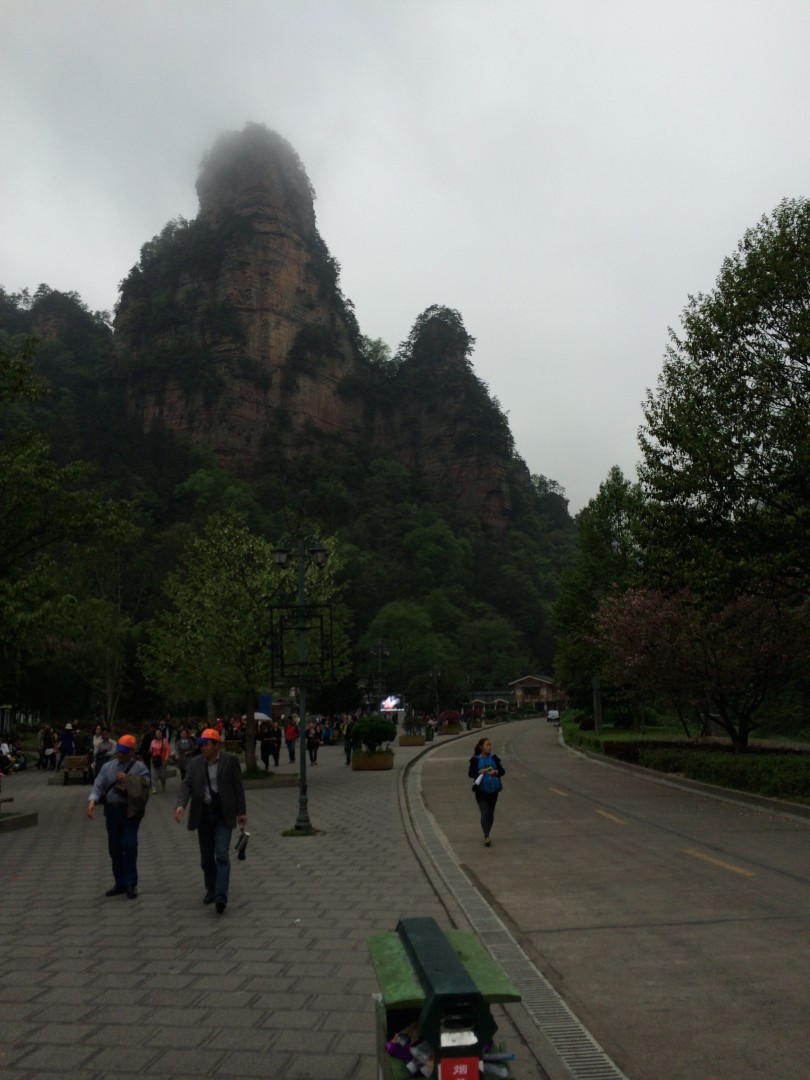 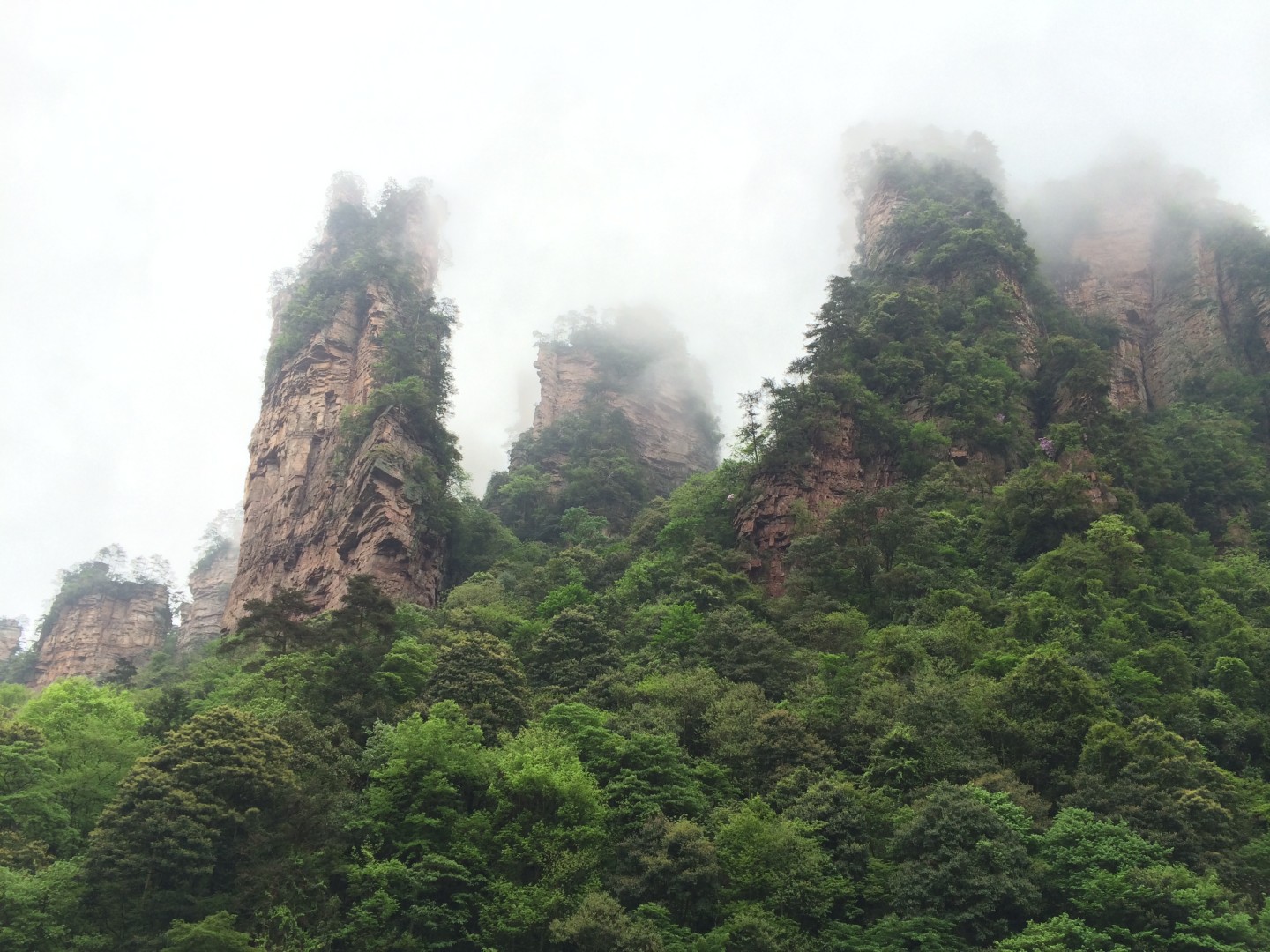 I have to admit I was a little concerned when I saw this sign!  Why would I tease the wild monkeys?! 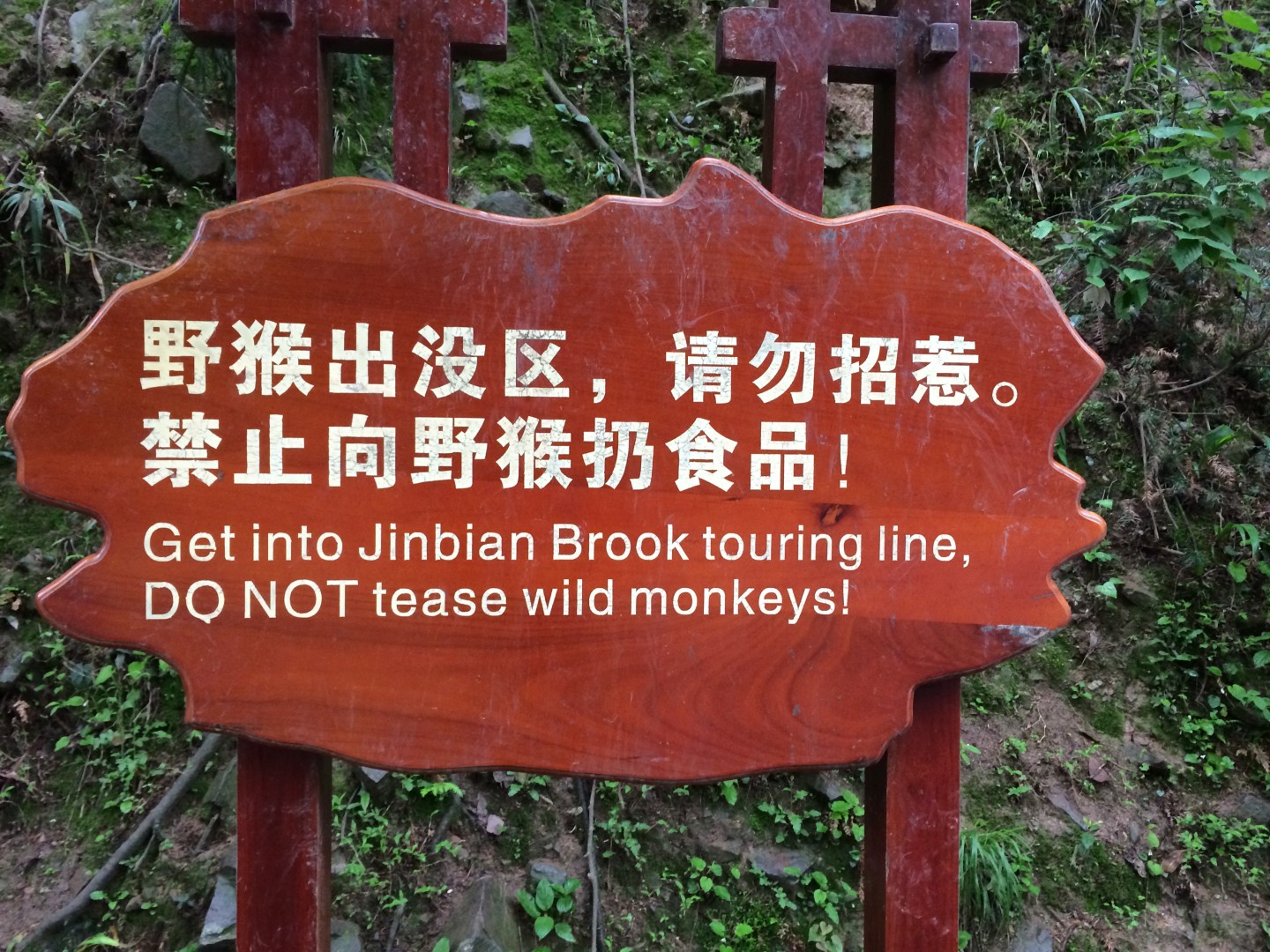 And sure enough next thing I know I saw a red faced monkey heading my way…. But wait, what was that underneath her? 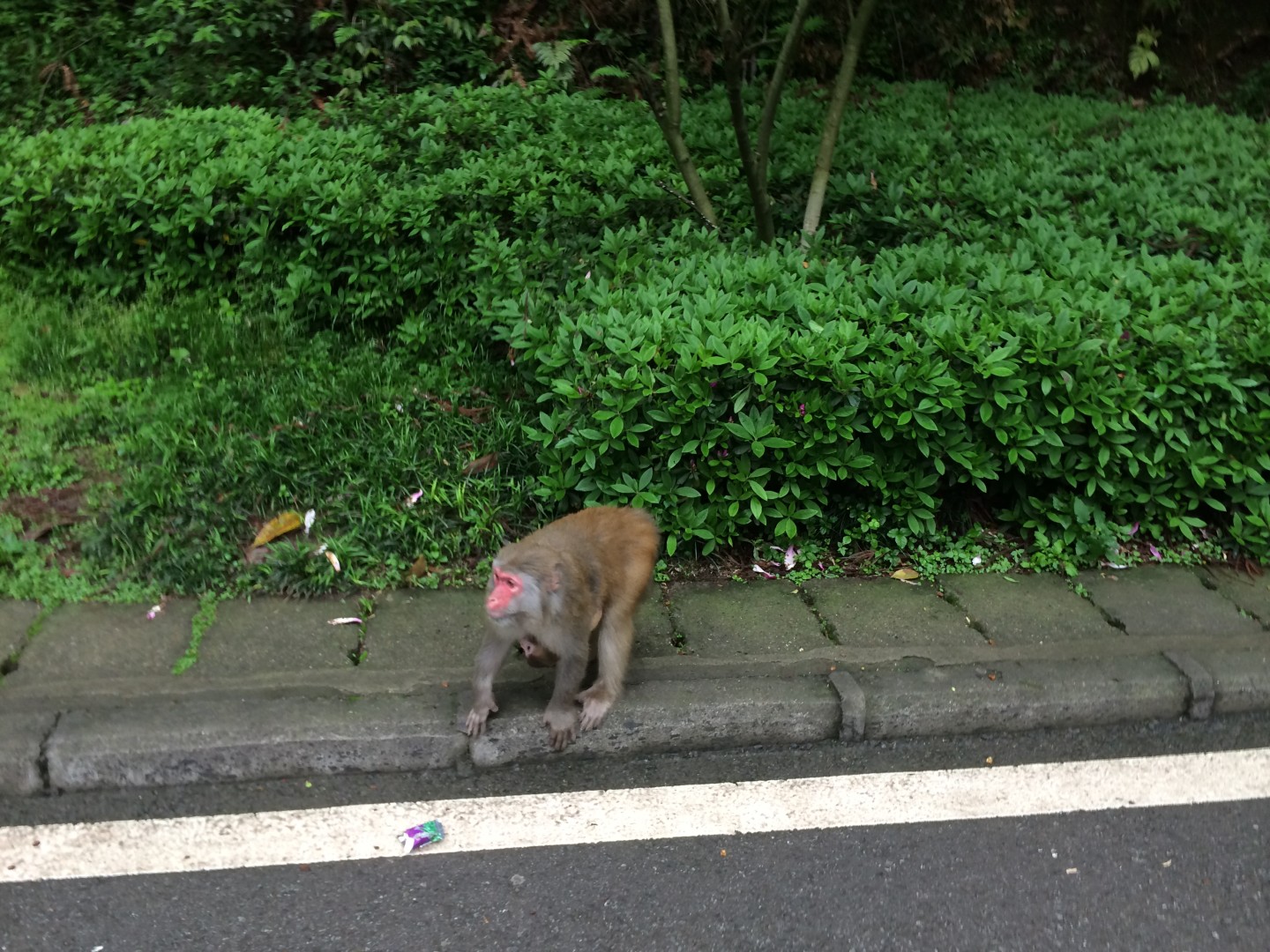 OMG it is a baby monkey! 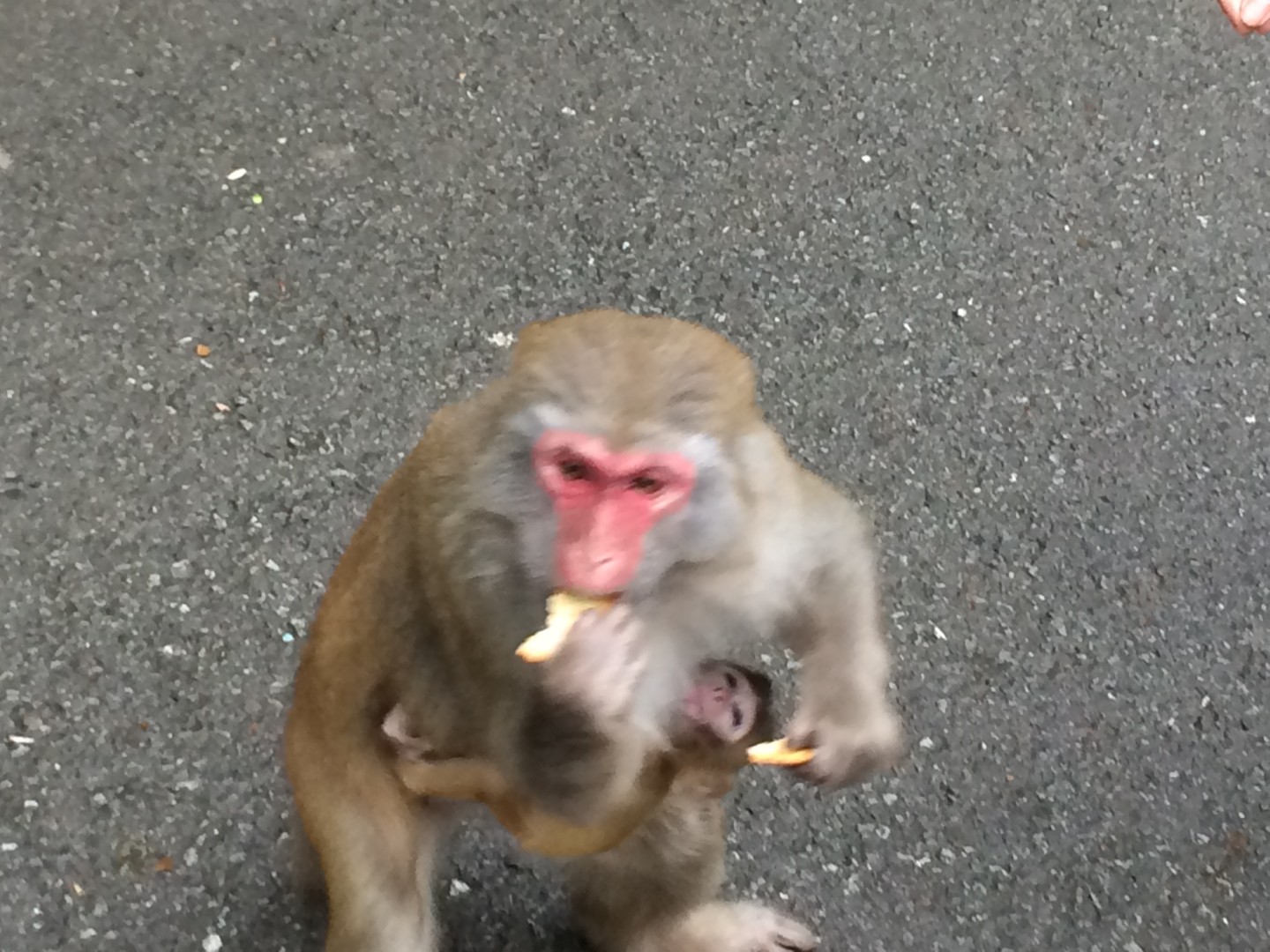 And then the rest of the gang showed up.  And by gang, I really mean it!  These guys were ruthless, grabbing bags of food and candy right out of the hands of the throngs of Chinese tourists. 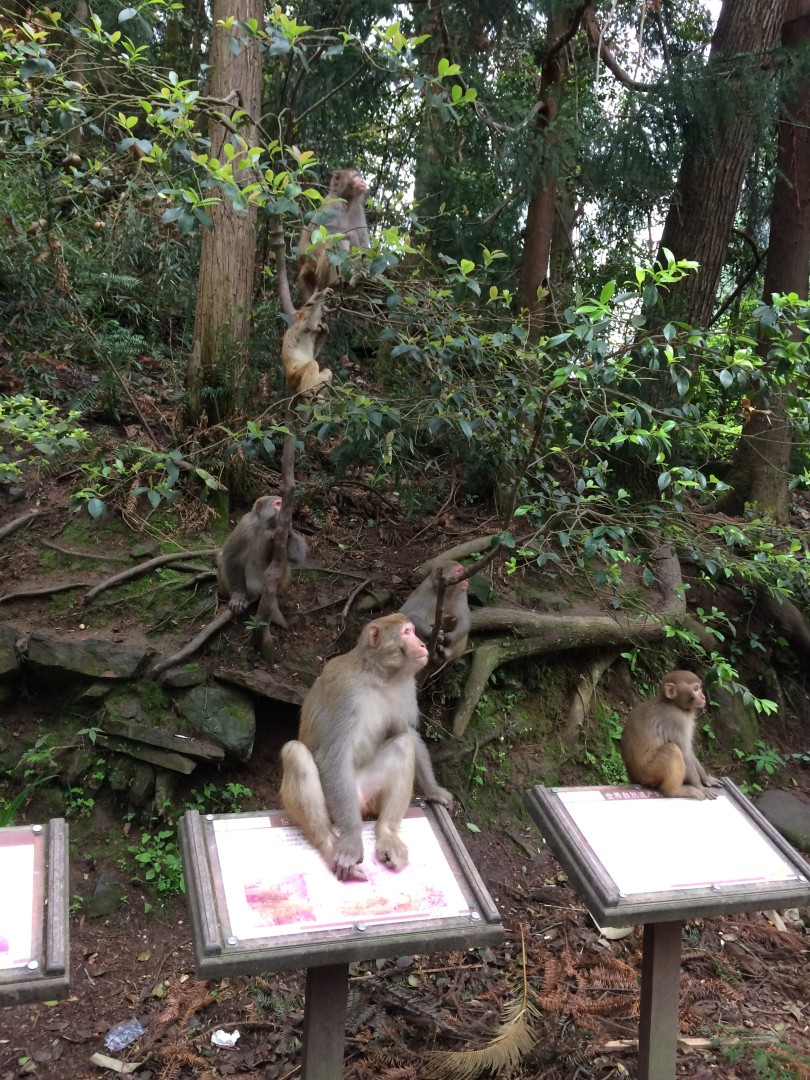 I stopped by this lake for a photo with some of the rock formations. 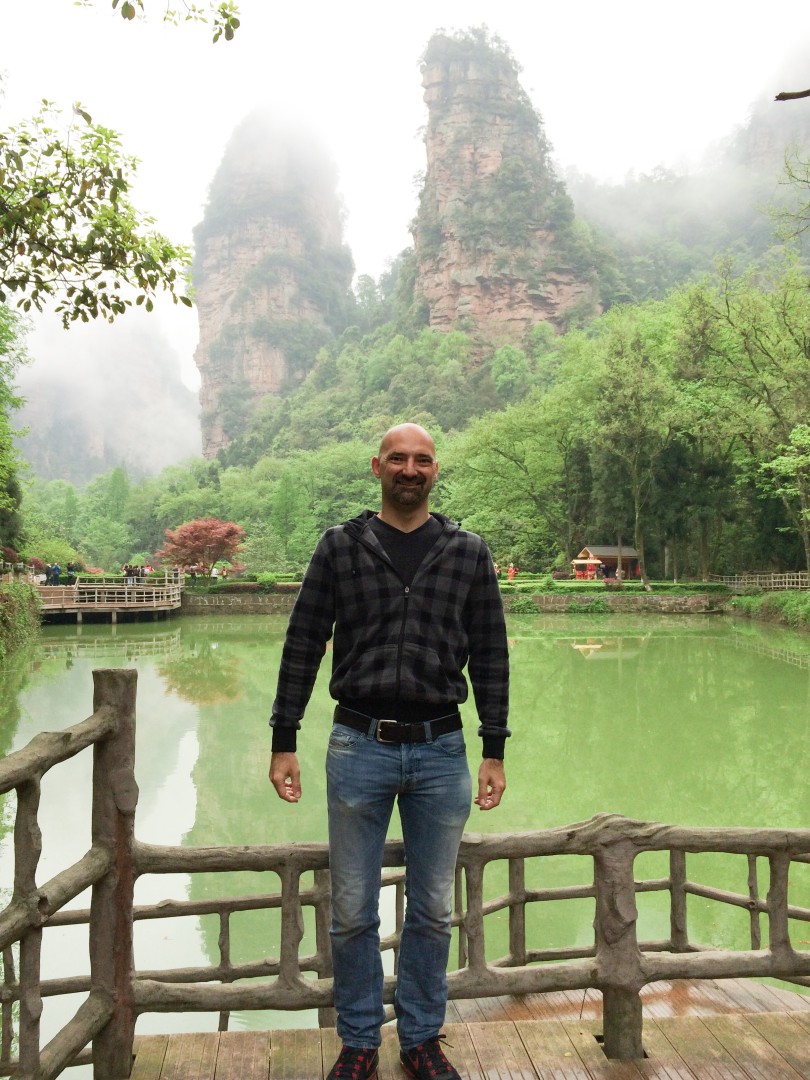 The formations look amazing with the clouds just covering the tops. 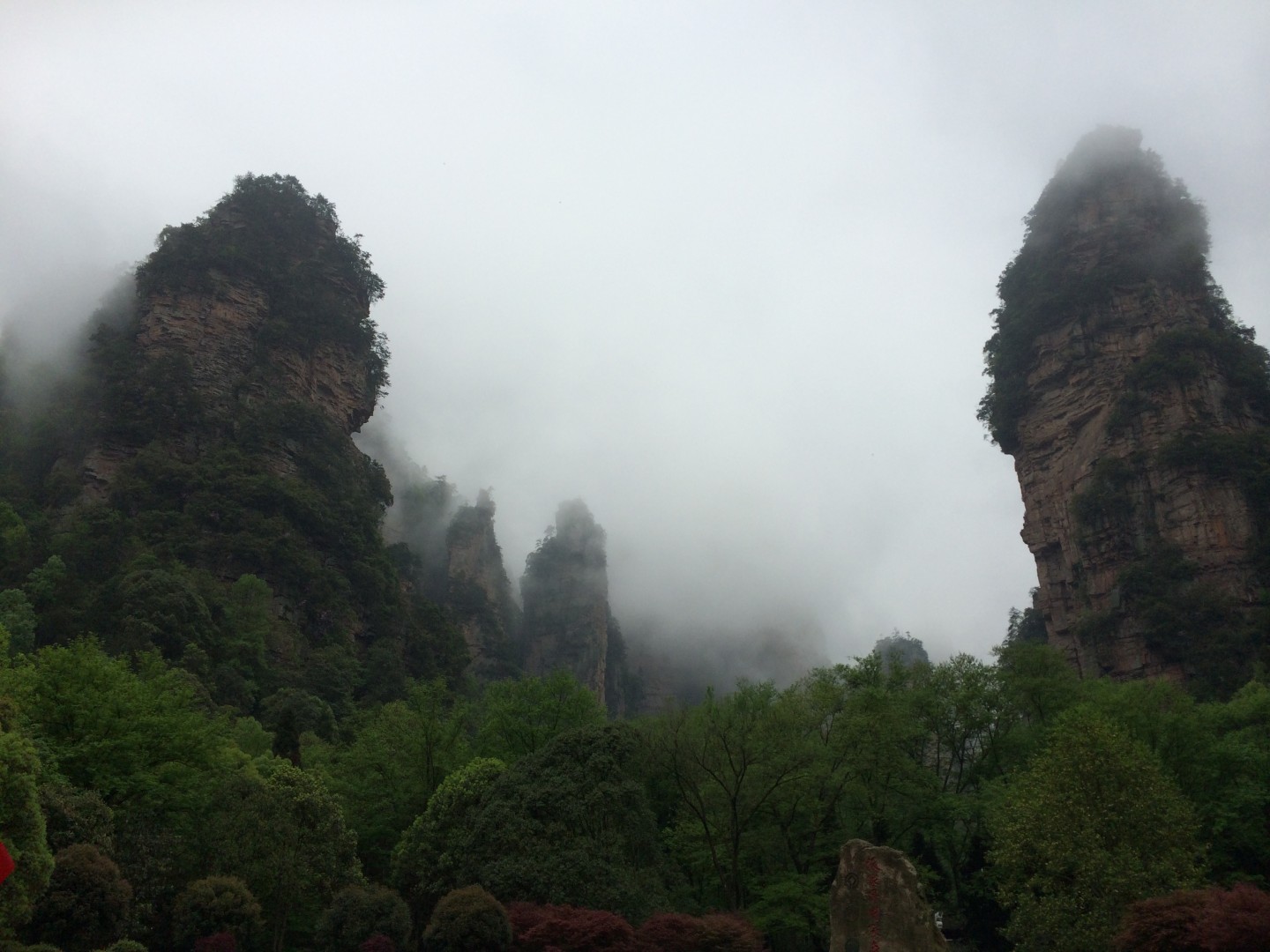 But I wanted to go up, up, up via the cable car to get a better view. 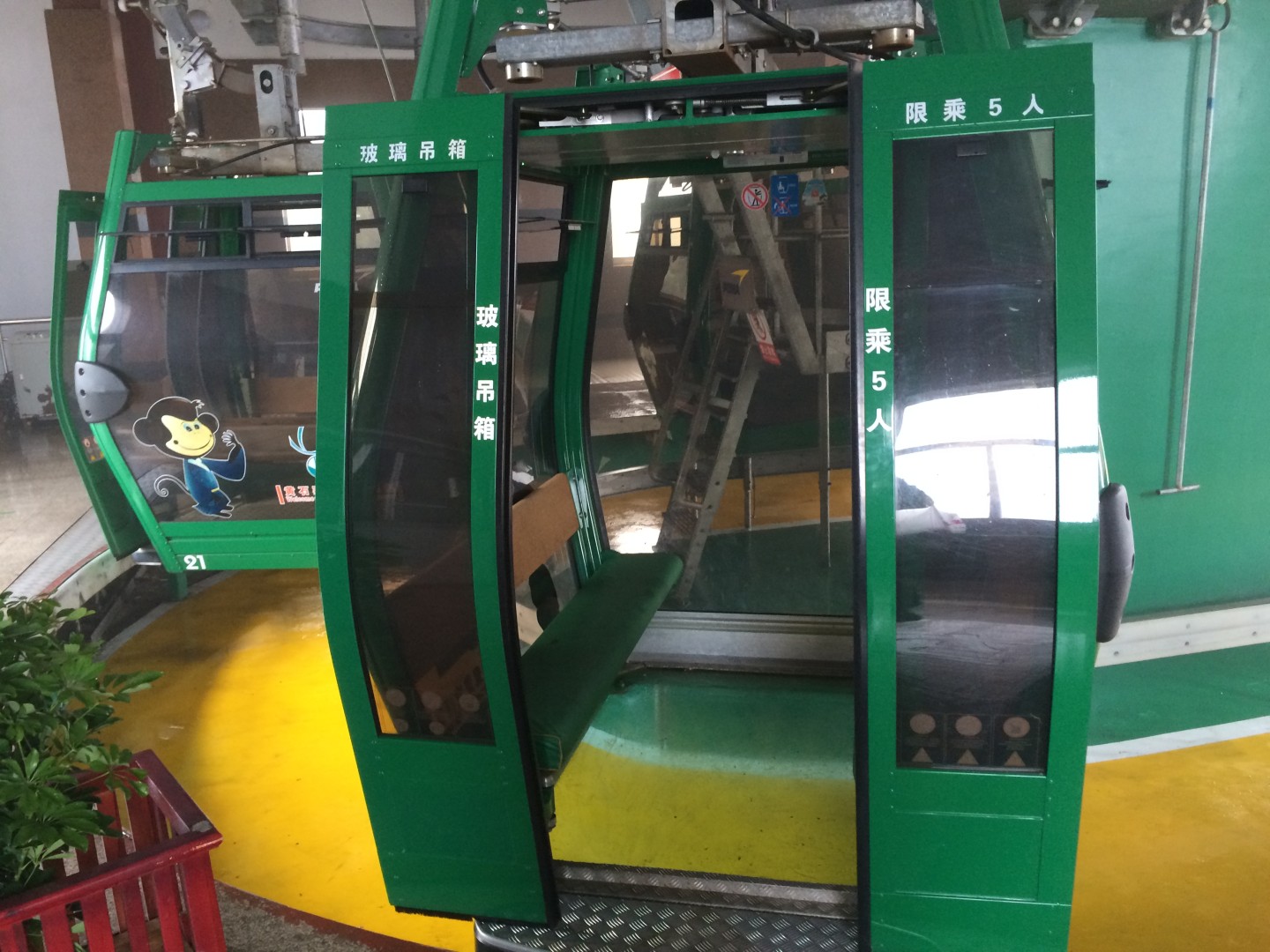 What!?  It has a glass floor? Ooooooh 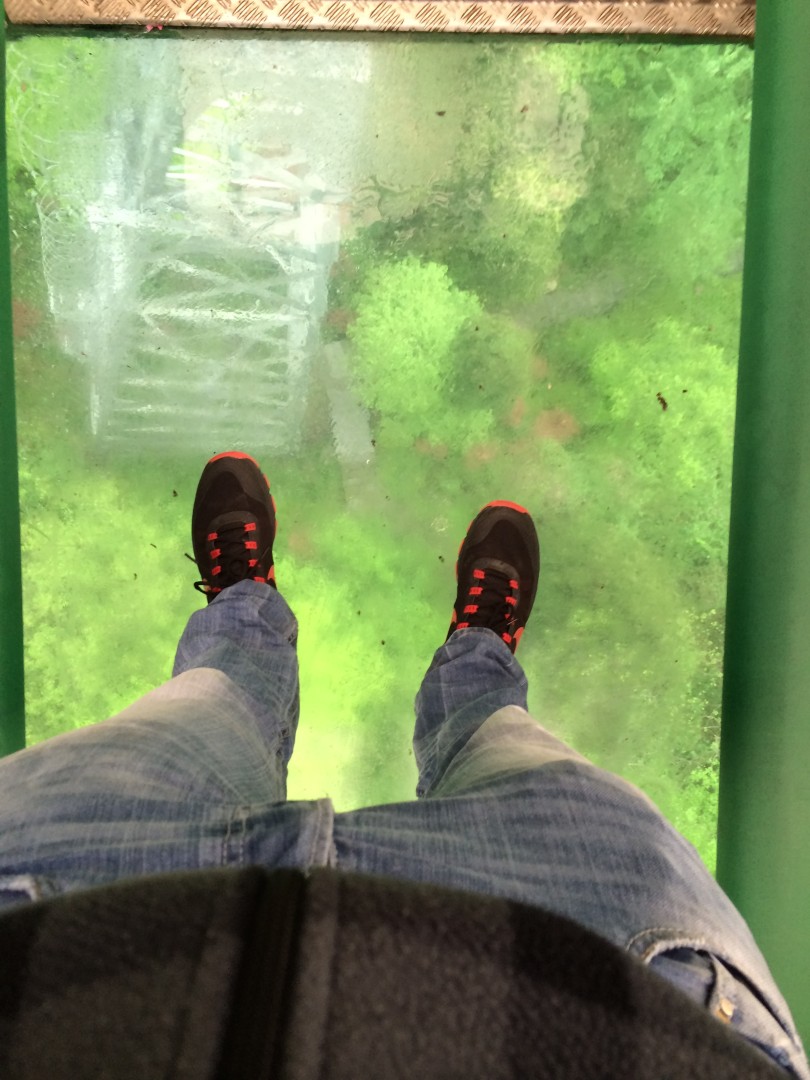 What an amazing view going up! 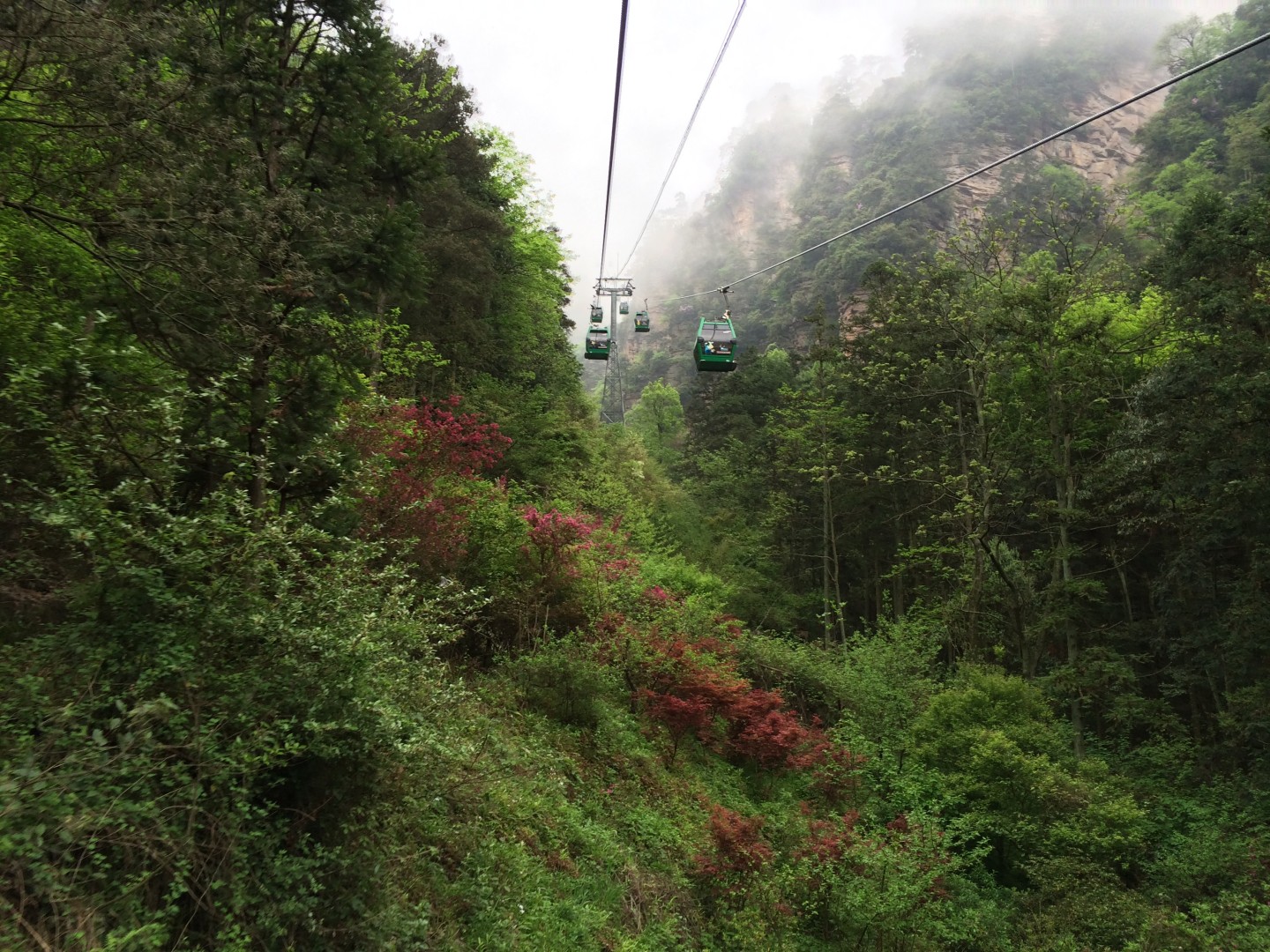 I’m not sure what this sign was all about…. #China 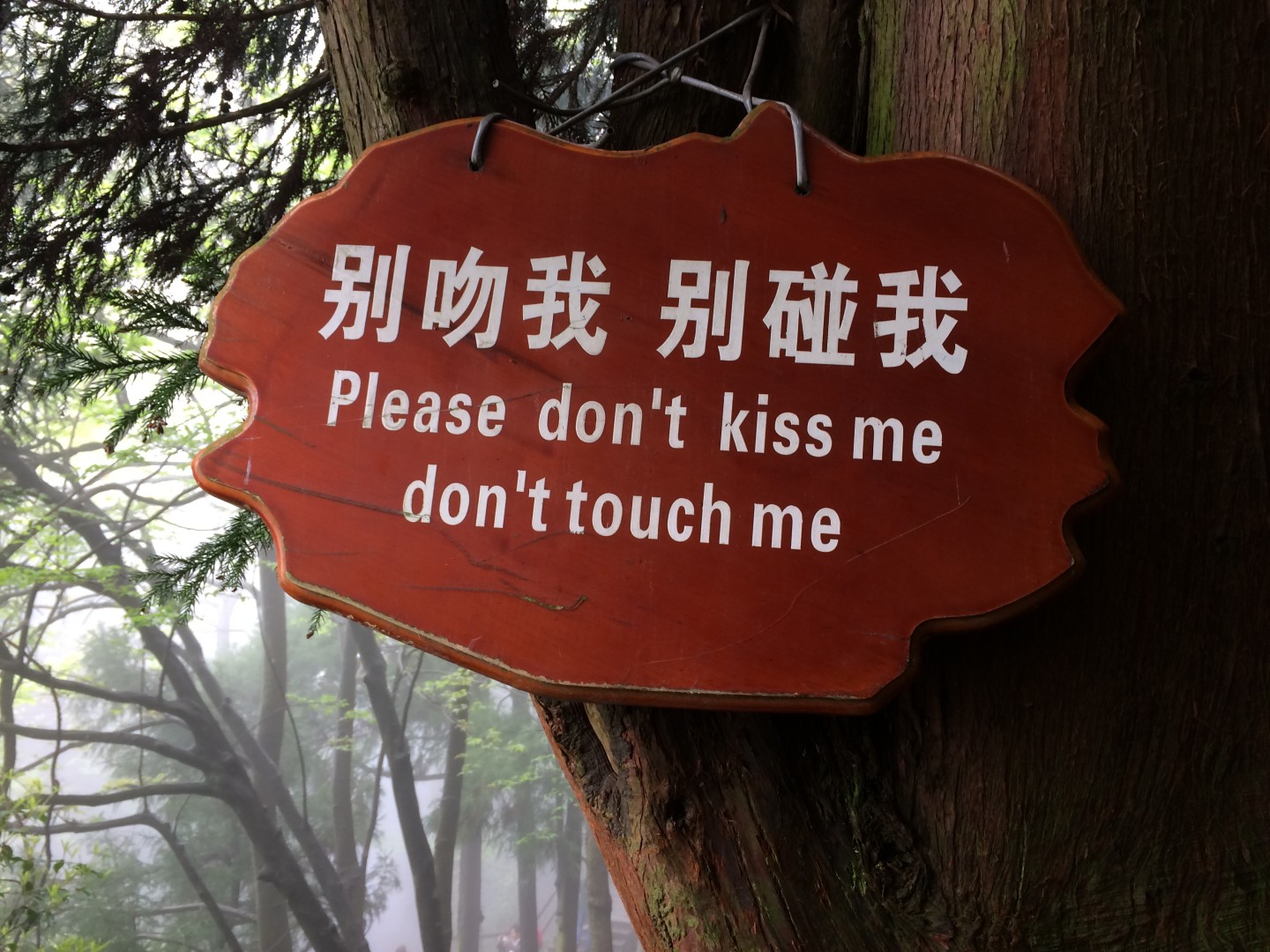 Once on the top of the mountain, I quickly realized I was literally in the clouds! 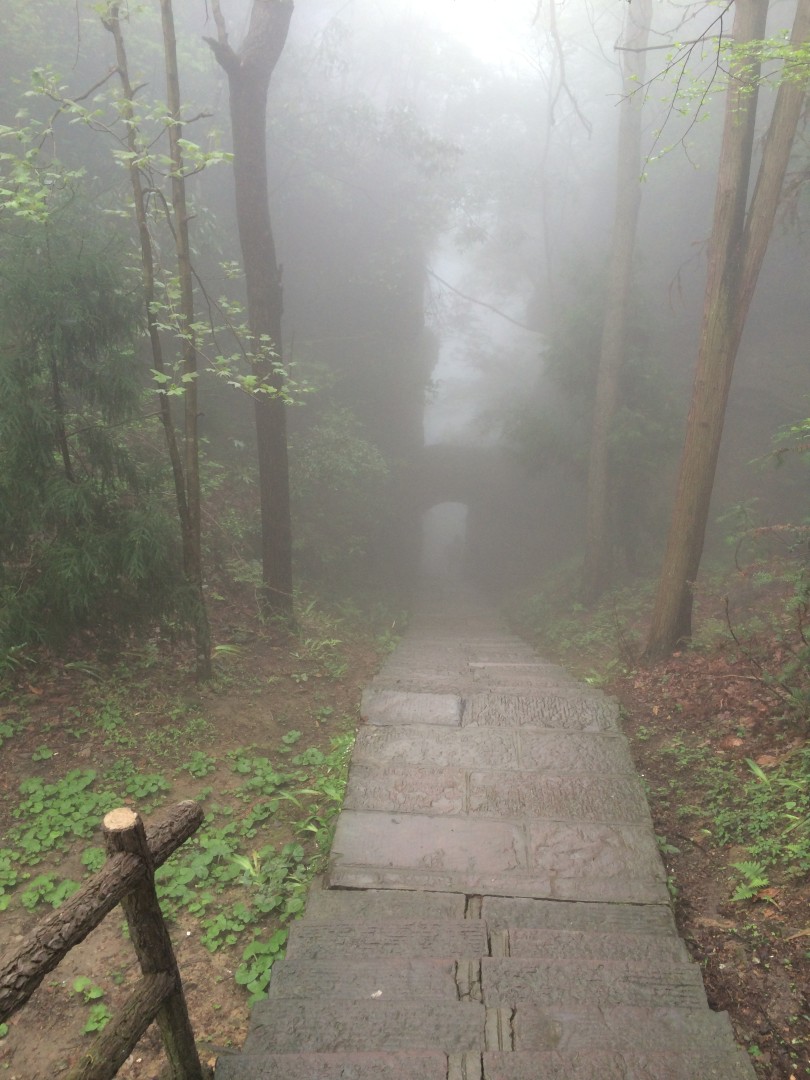 This made for some cool shots, but really it was just about zero visibility. 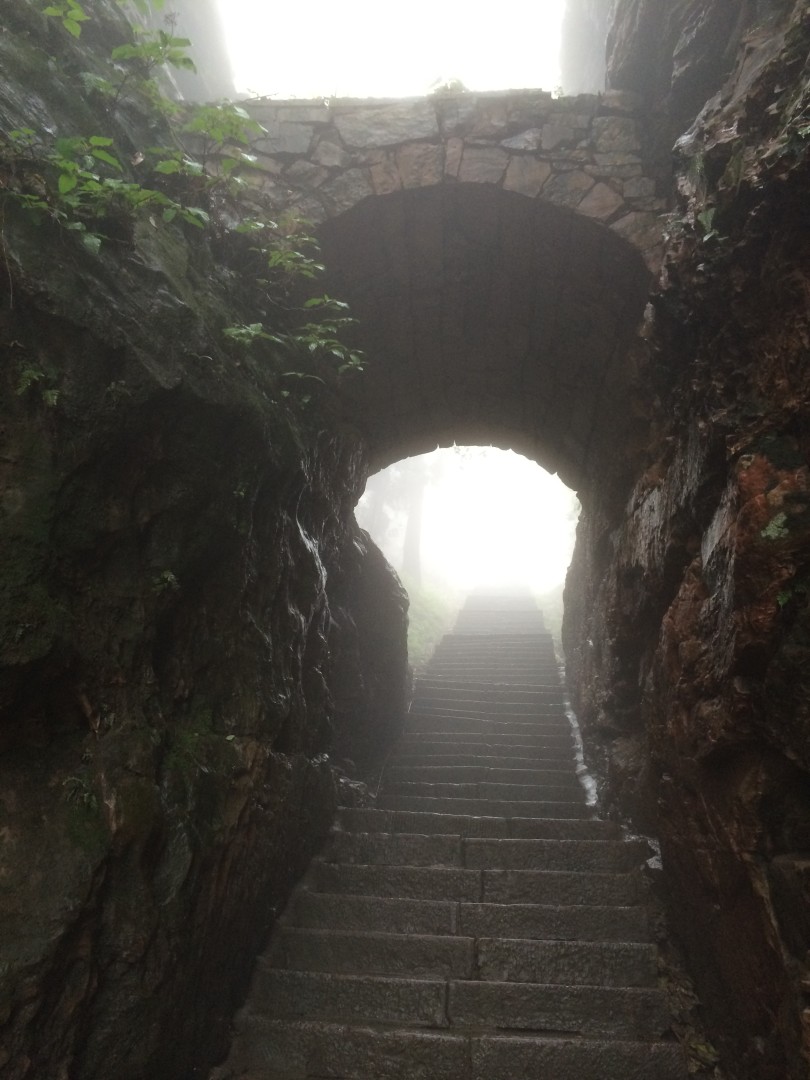 To see how bad the visibility was in the rain clouds:  For example, this is what the “Five Finger” formations was supposed to look like from where I was. 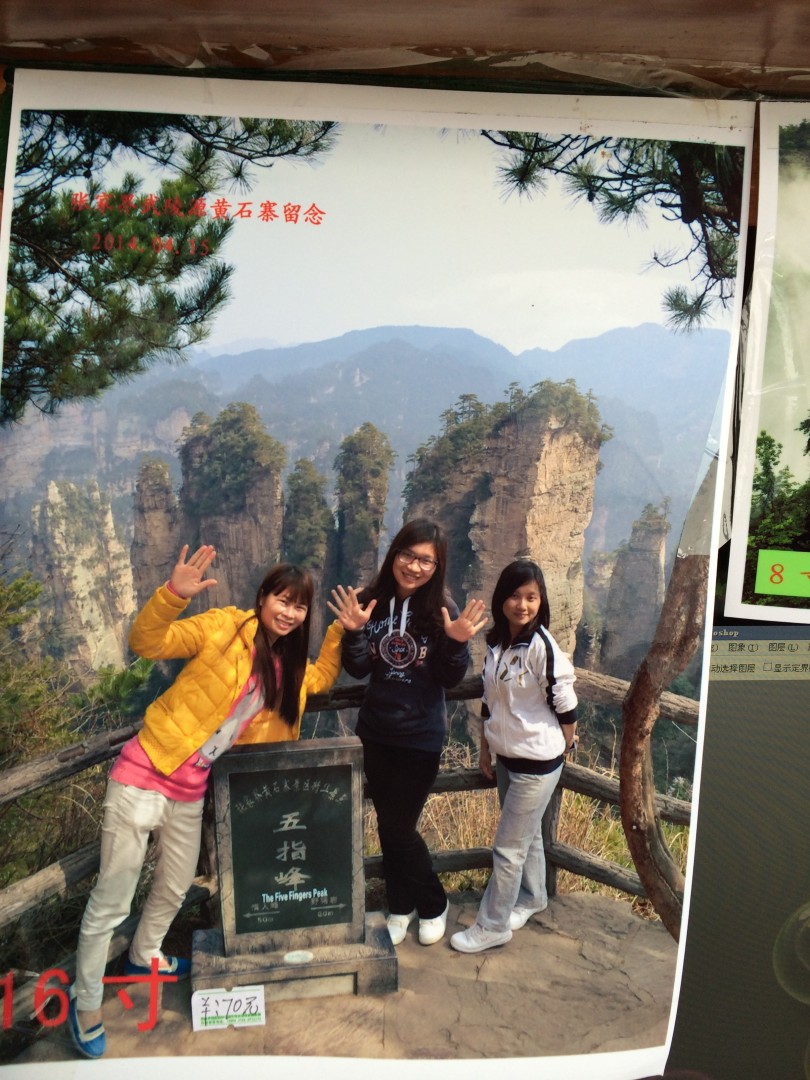 This was what I saw on that day. 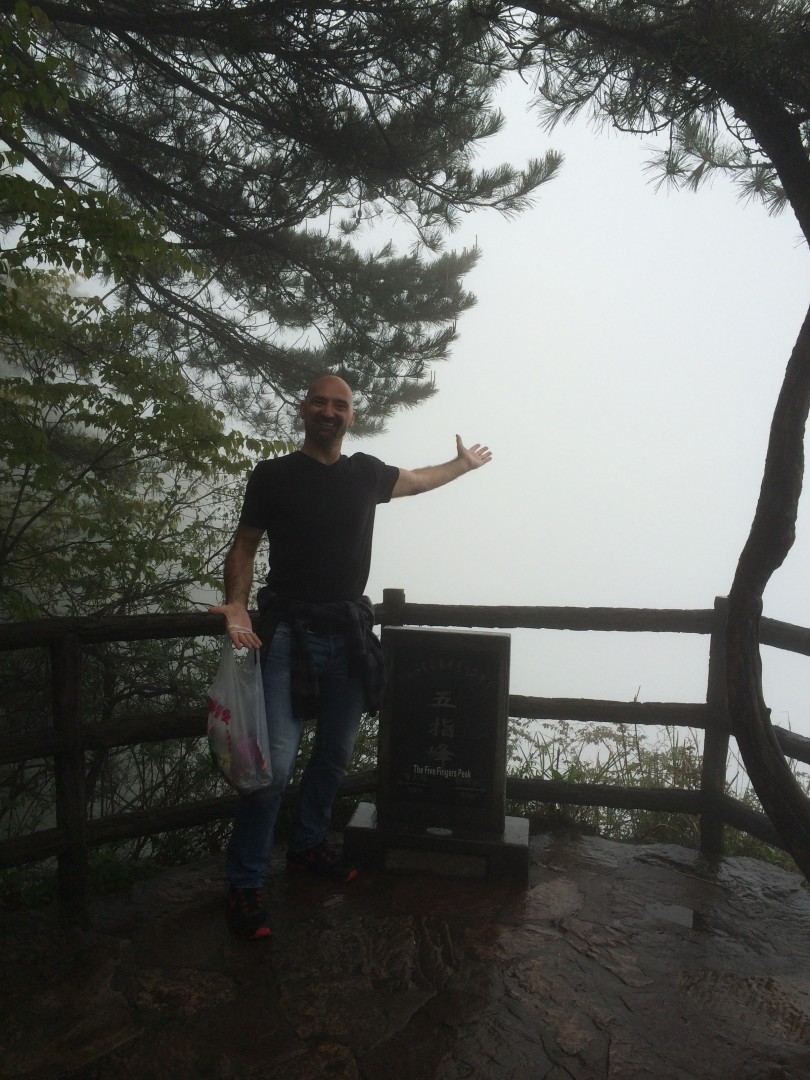 I thought maybe stopping at this Gallery would help, but it didn’t end up being what I thought it was. 🙂 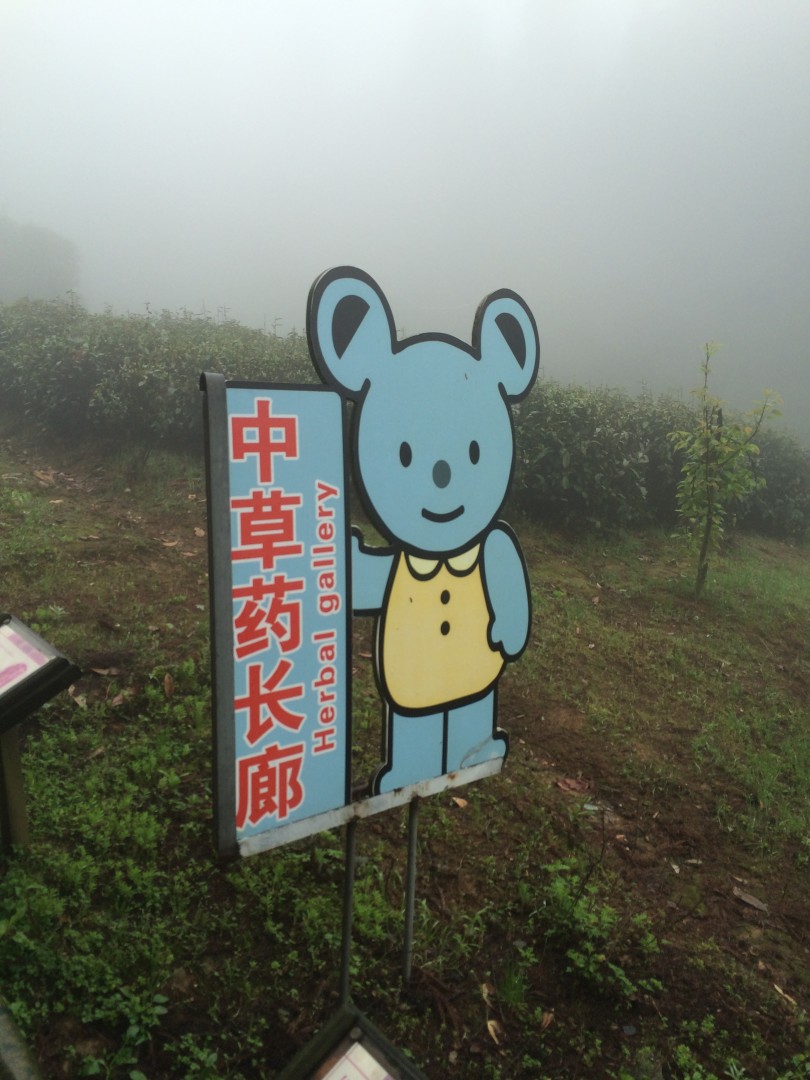 This pagoda up on the top of the mountain did look cool in the clouds though. 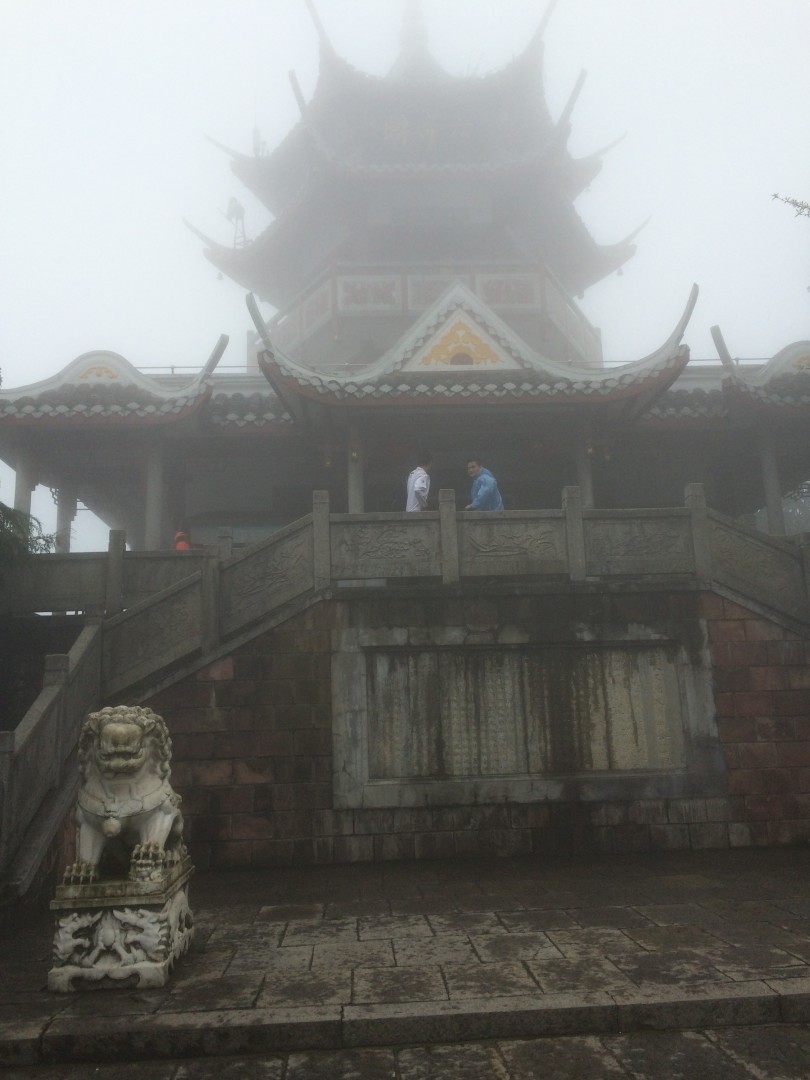 I took the cable car back down and got some other good shots once I got out of the clouds. 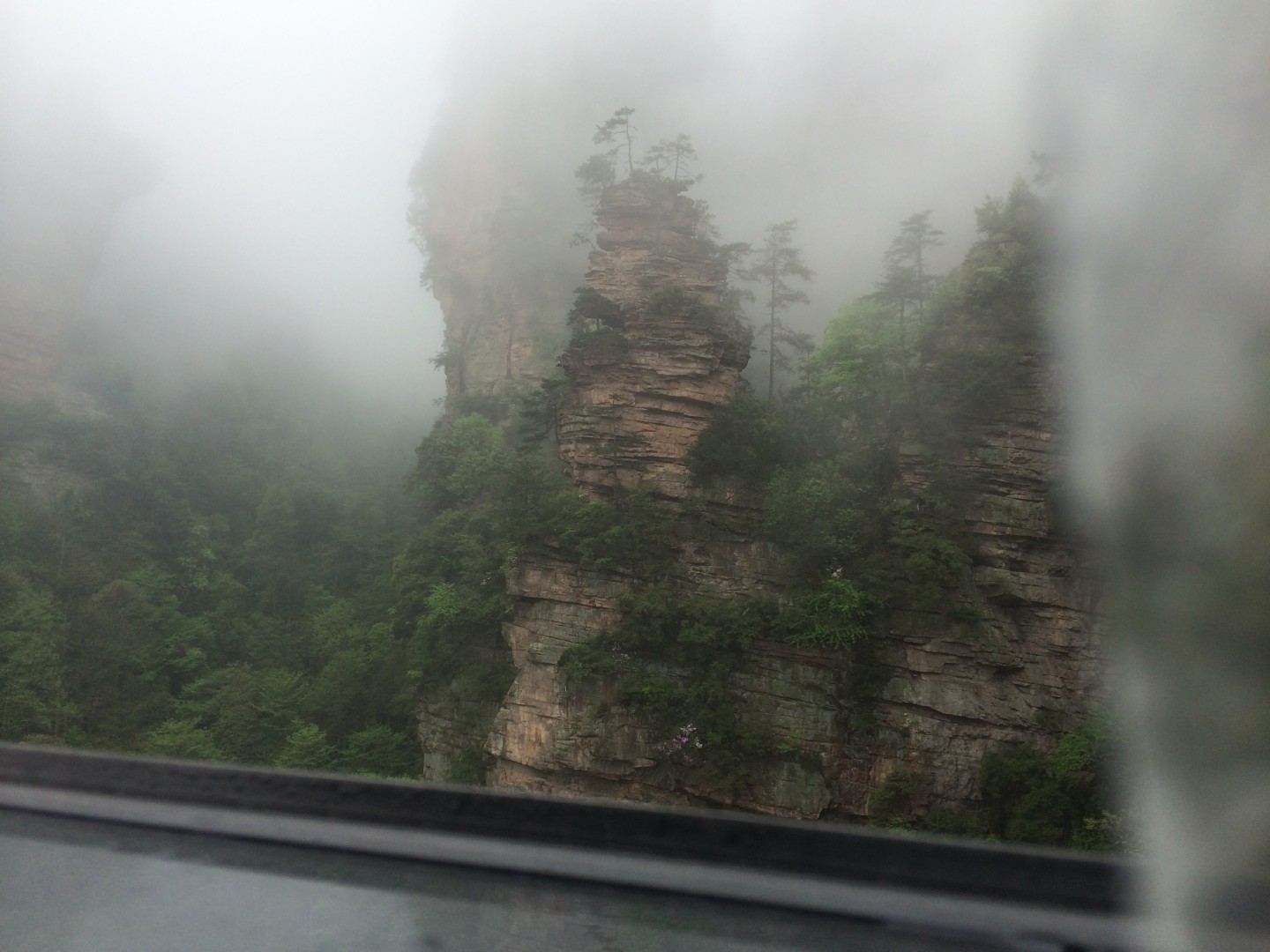 I then went on a hike at the base level where the visibility was better. 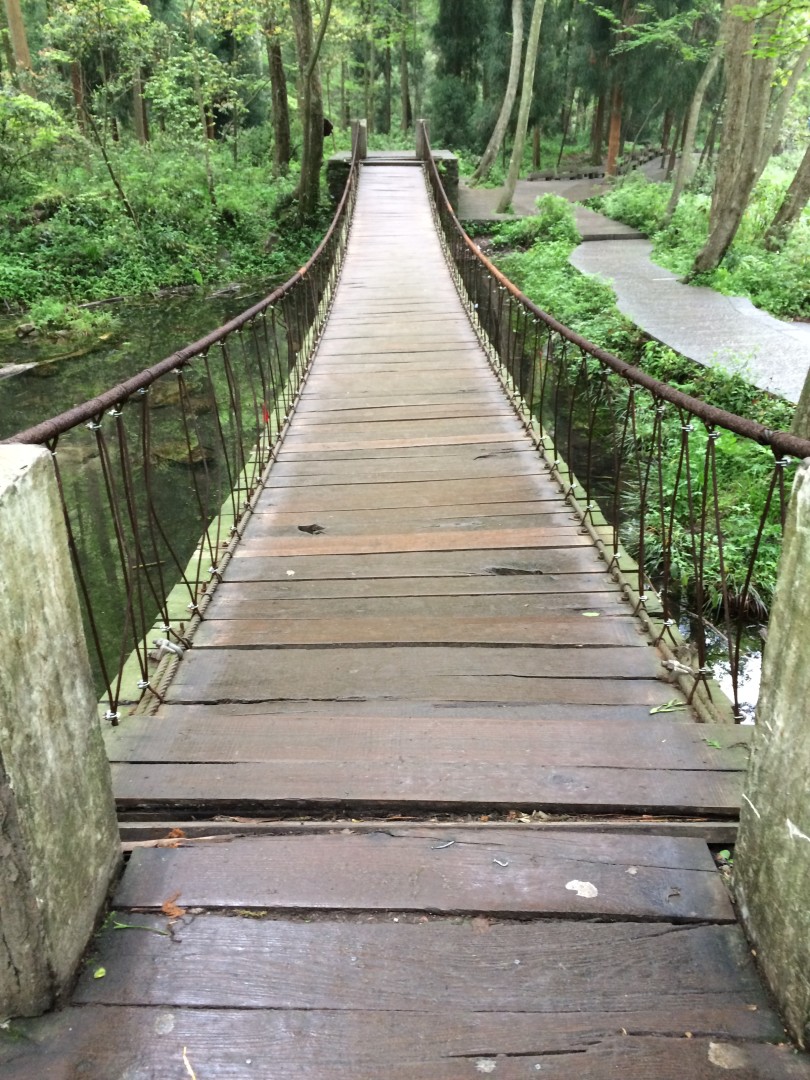 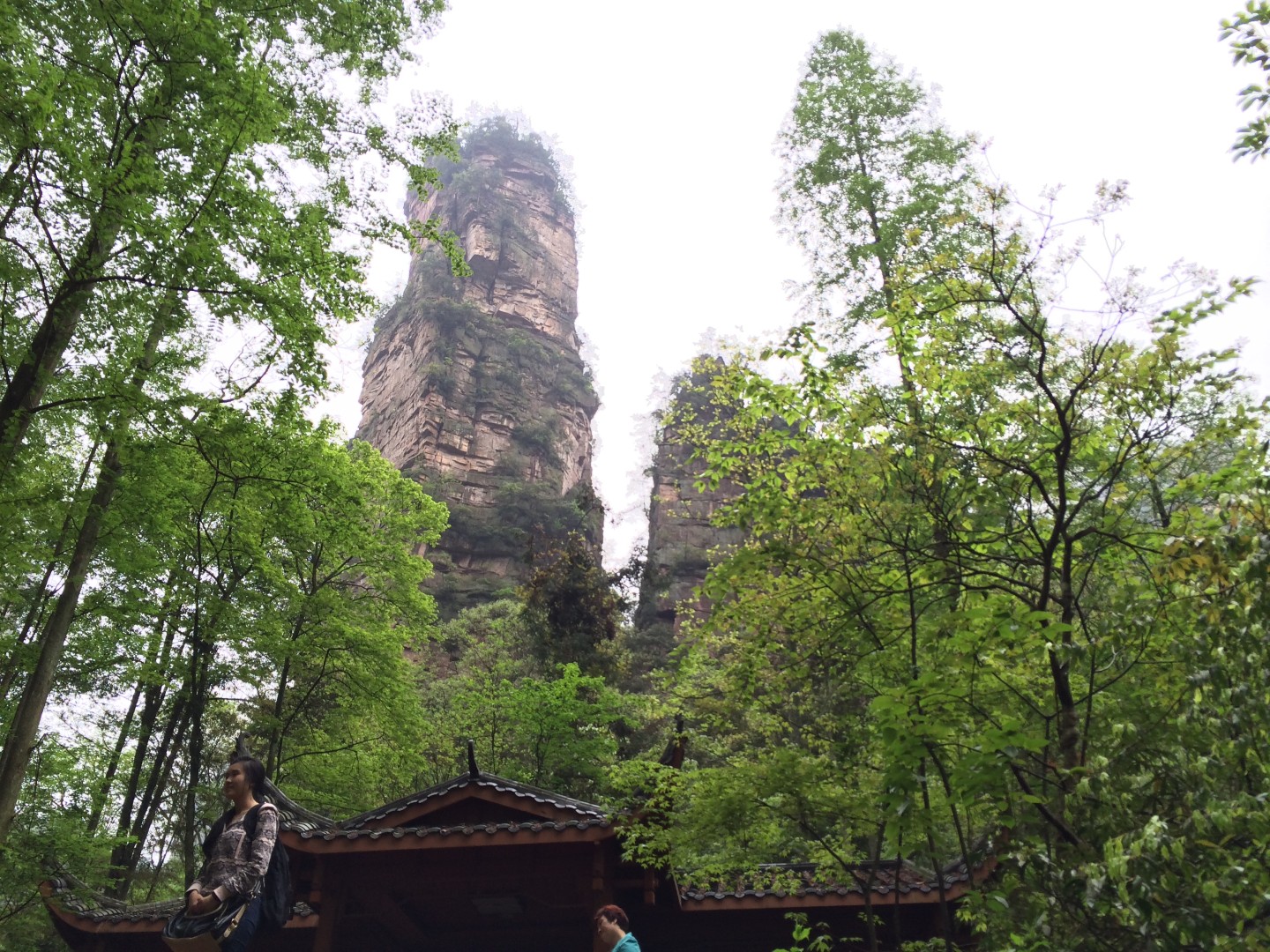 It was right after this creek that I made a critical error. 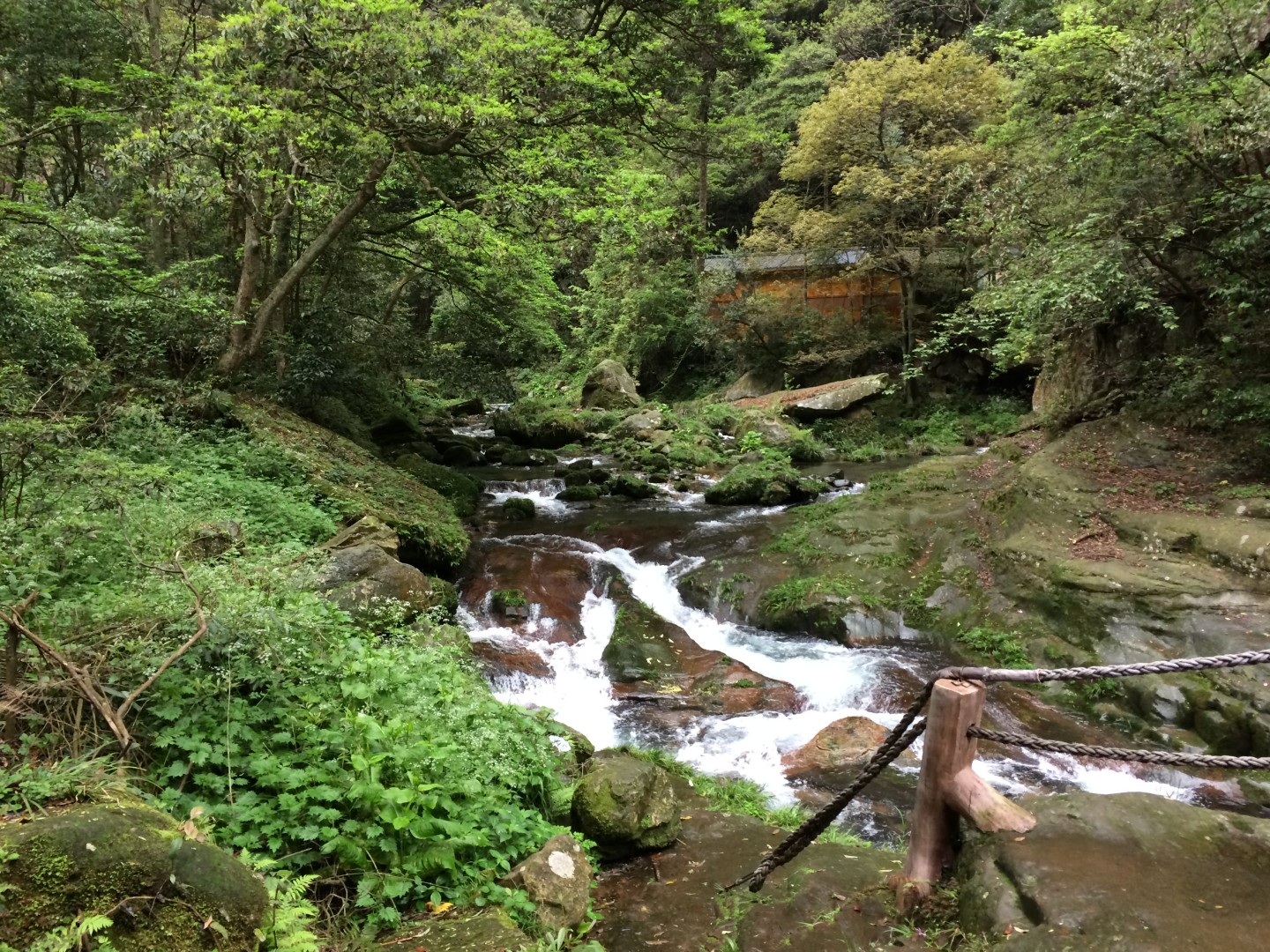 I was happily plodding along a nice trail and saw a staircase jutting off to the left going straight up the mountain.  I thought to myself “I came here to take the path less traveled!” and so up the stairs I went.  And up. And up.  And up.  And the further I went, the more committed to getting to the top I became.  It ended up being like the stairmaster from Hell and while I was taking a break, I saw this coming my way!

I think this woman had the right idea! 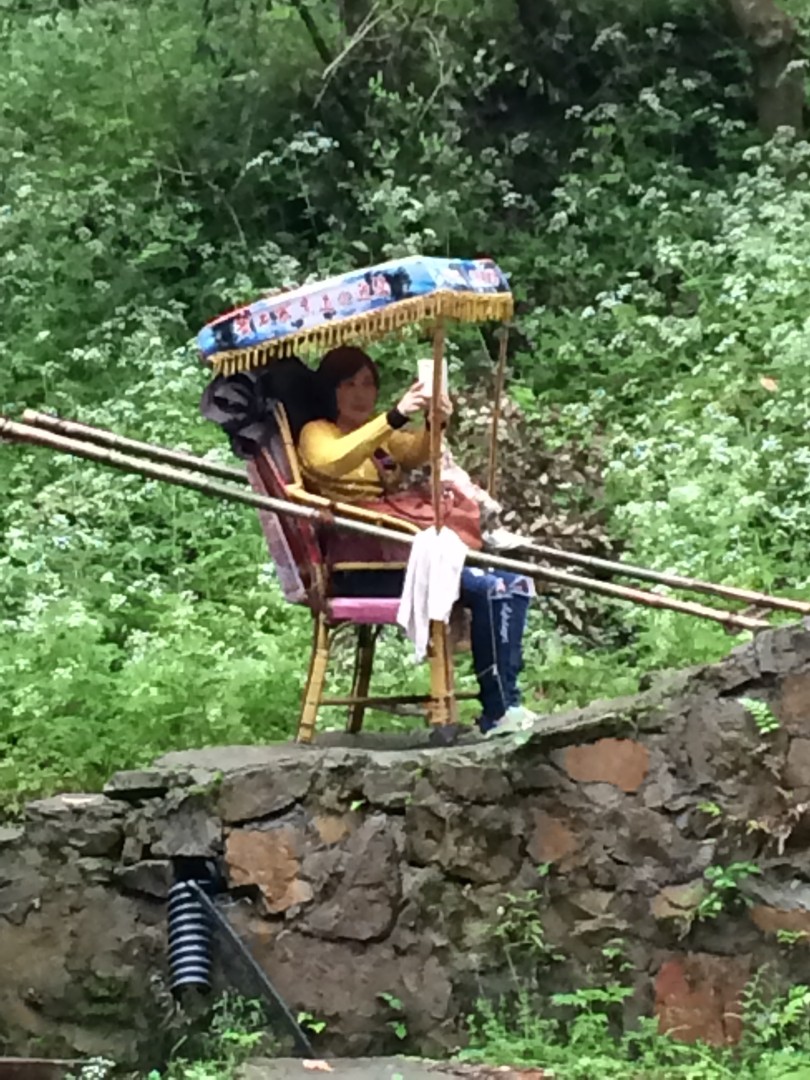 I saw this wicked spiderweb on the way up too. 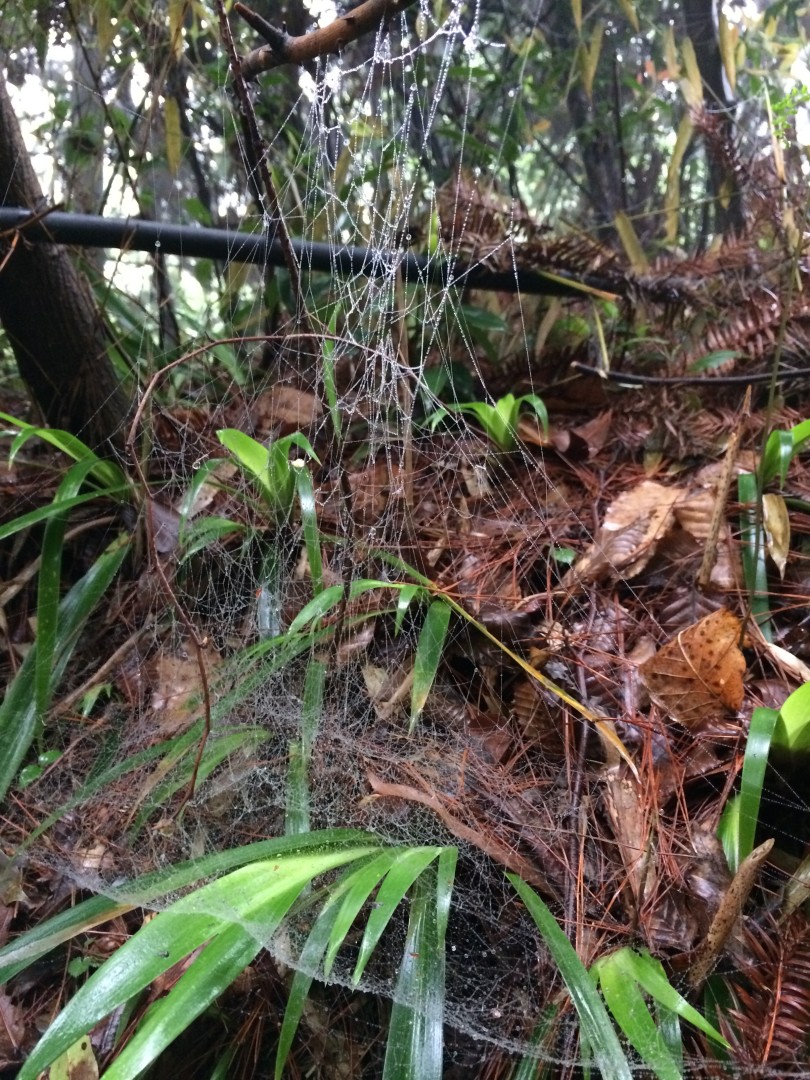 When I got back up on the mountain I was back into zero visibility again but ran into this Avatar inspired photo op spot. 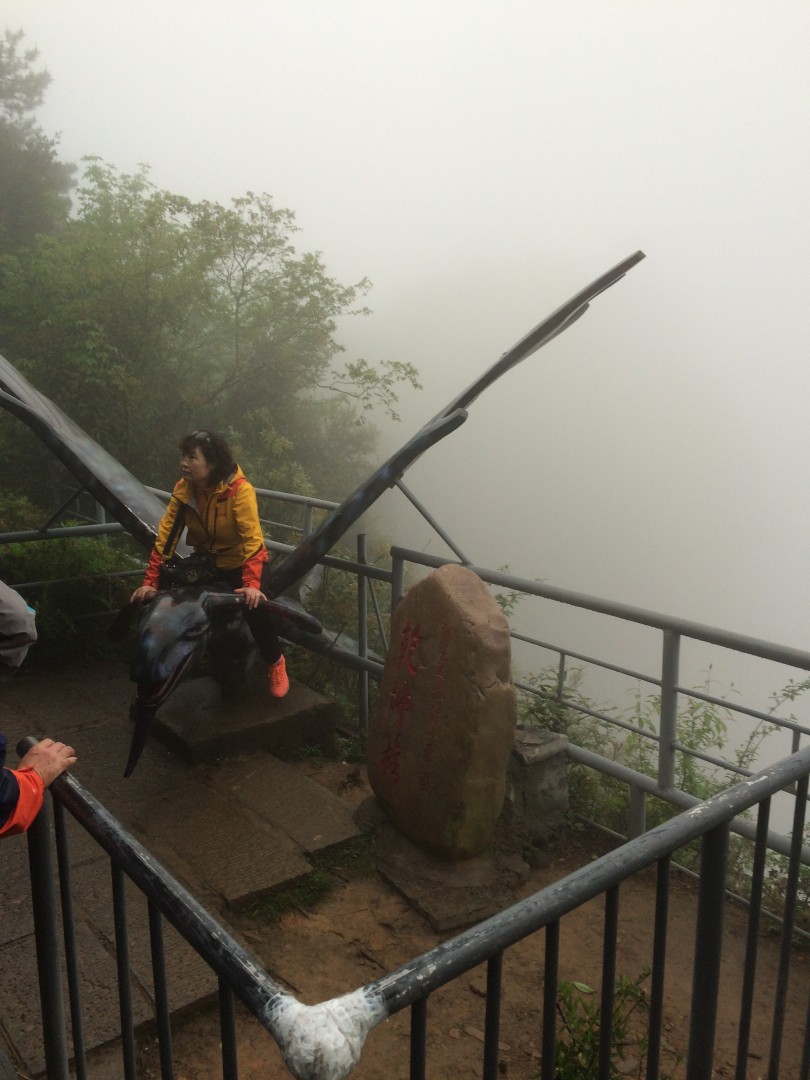 This bridge certainly looked foreboding.  But I crossed it! 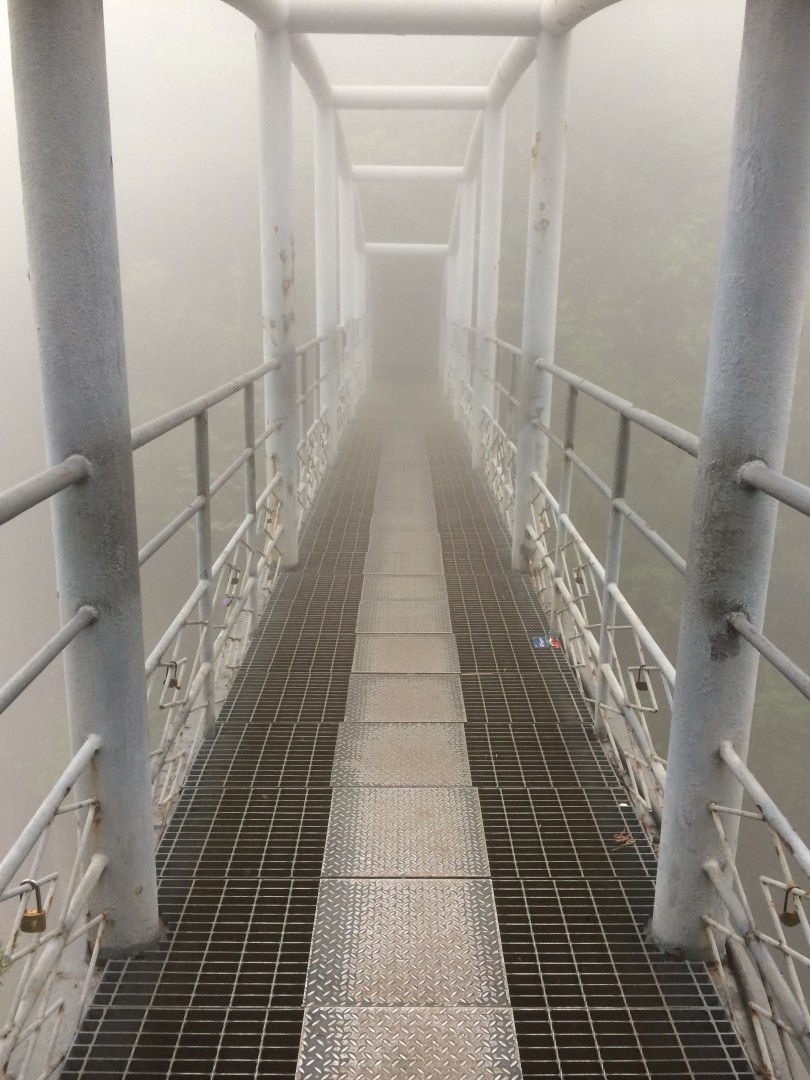 It was about this time that I ended up getting lost in the park!  The signs were a bit ambiguous and asking people was no help because no one spoke English.  After a while I decided to go back the way I came in which meant going back down the thousands of stairs I took to get to the top of the mountain.  And all this was at the end of the day, the sun was setting and my phone battery went dead!  So imagine me running down the trails trying to get out of the park before dark while monkeys were howling from the woods.  I finally made it out in darkness and of course all the buses had stopped running.  There was a little string of shops right outside of the park and there were some street vendors cooking stir fry and drinking beers.  I ended up befriending them and they let me charge my phone and share their fire since it was a little cool that night.  One of them even ended up acting as a taxi to take me the 30 minutes back to my hotel!  Another great story about how friendly the Chinese people can be.

I was exhausted and frustrated with the weather.  When I woke up the next morning it was pouring rain and I didn’t want to go out in it again and not be able to see anything.  When I looked at the forecast and it said rain for the next week there,  I decided it was best to go ahead and get out of the area even if I didn’t get to see Heaven’s Gate or some of the other cool things I planned on seeing.  Sometimes the weather just doesn’t cooperate with your plans. 🙁  Since there are no fast trains out of Zhanjiajie, I ended up taking slow trains to Wuhan, and spent two nights there at a Holiday Inn which met some of the requirements for my 101,000 point IHG Big Win!  I’ll talk about my time in Wuhan in my next article!