This is part 15 of a series on my trip to Austria, Germany and China.

Hangzhou (pronounced Hong-Joe which I didn’t figure out til after my video) was my next stop which is an affluent city one hours by high speed rail to the Southwest of Shanghai.  As the high speed train pulled into Hangzhou, I was excited to get to my hotel, the Intercontinental Hangzhou.  I had 3 nights at this hotel at a pointbreaks rate of only 5000 points a night which meant my stay would be completely free! Walking up to it, I was instantly struck by the design which is roughly a sphere.

Going inside, it only became more beautiful. 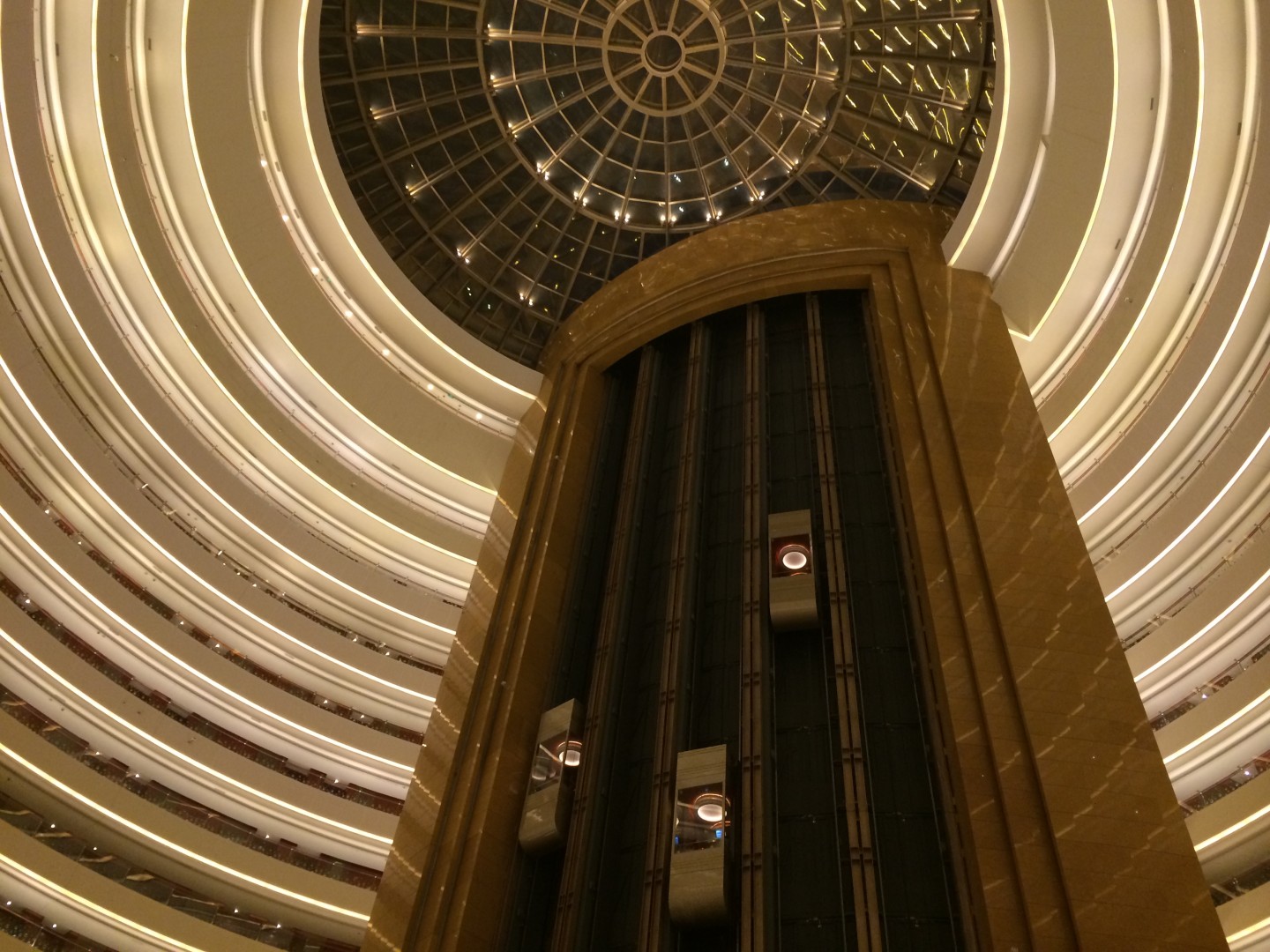 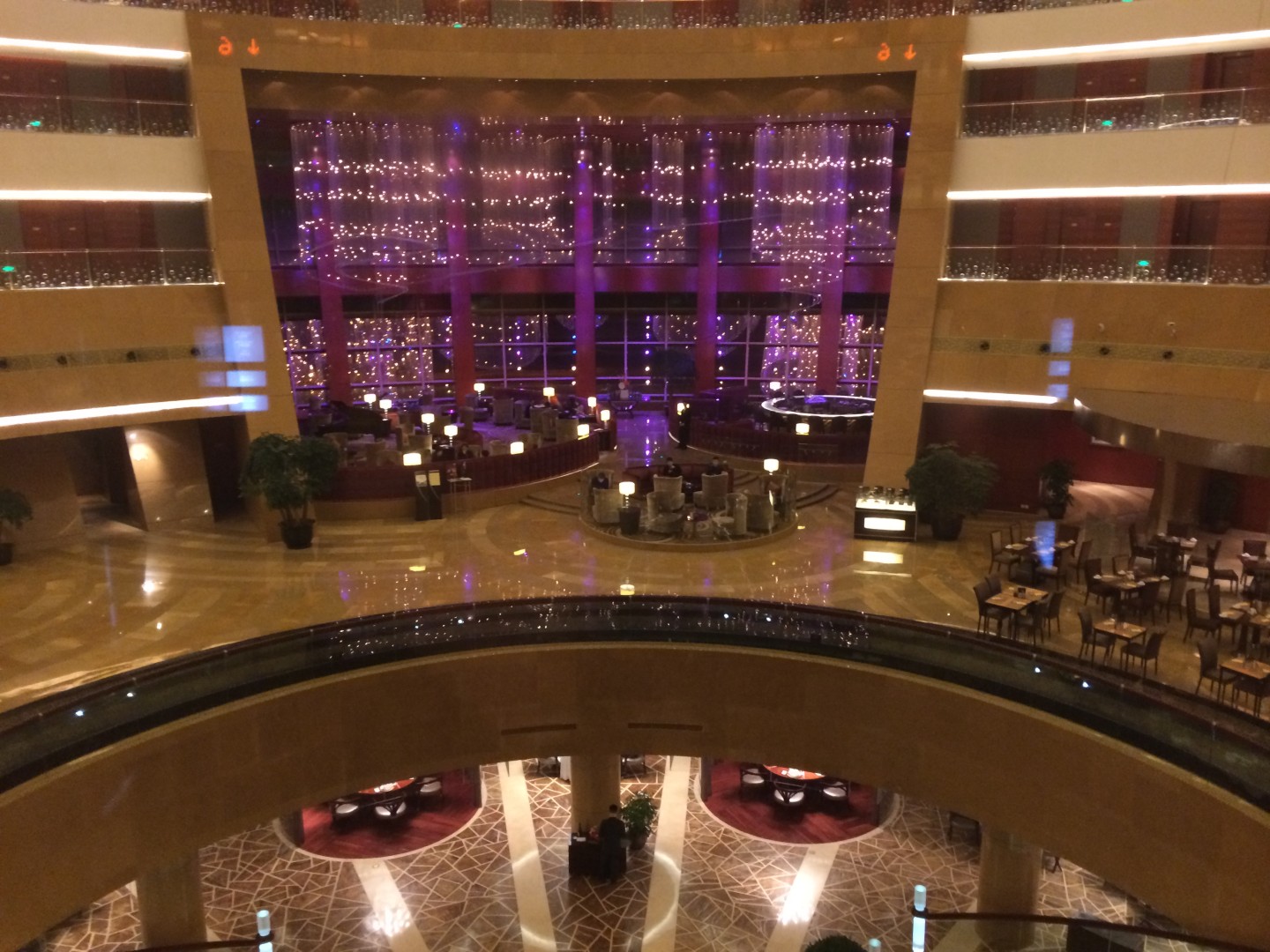 I loved the circular design everywhere. 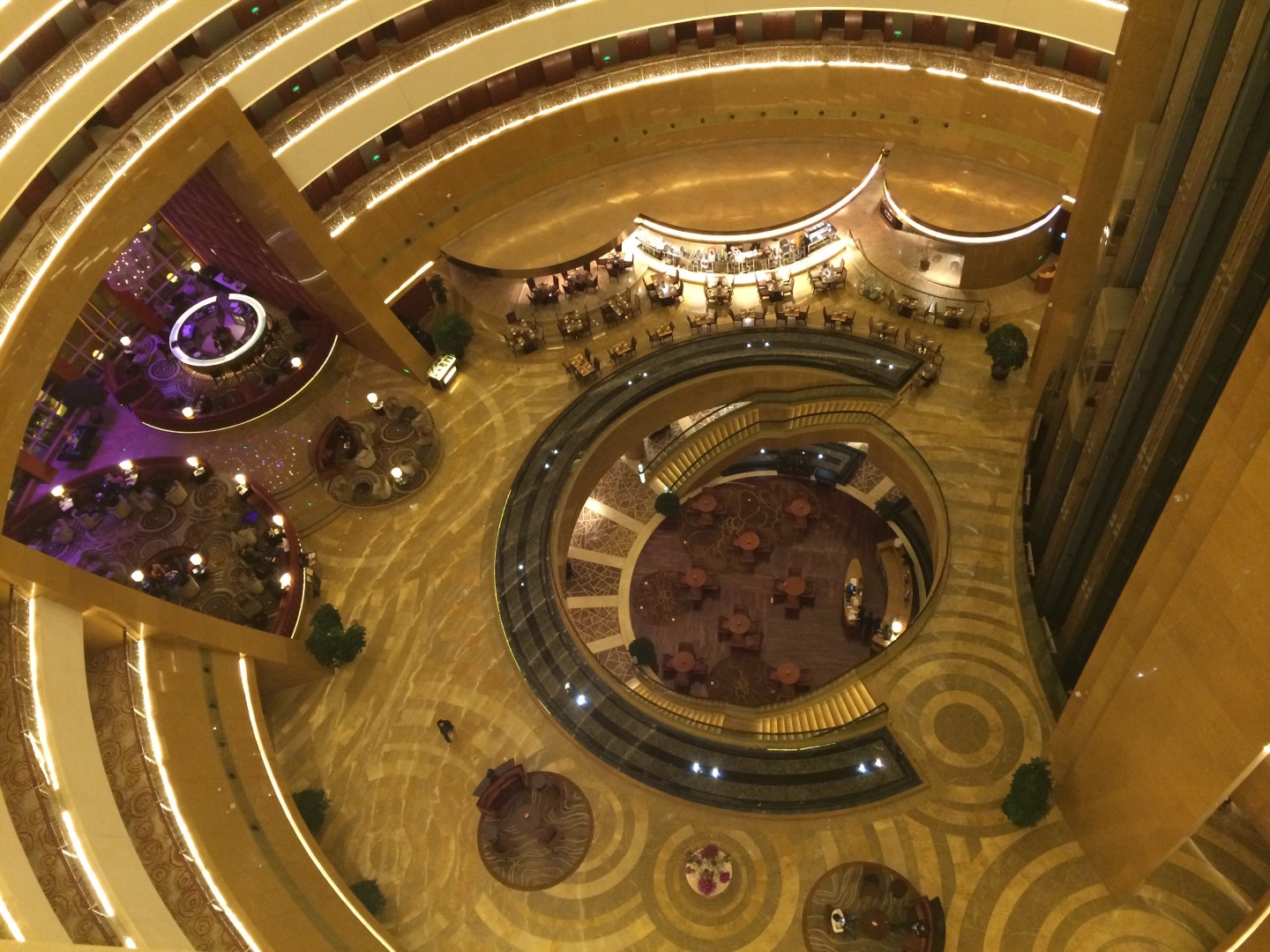 I had redeemed 32,000 of my IHG points (I had 132,000 from the last Big Win promotion) for an Intercontinental Ambassador membership in anticipation of this trip.  This gives me a whole host of benefits at Intercontinental Hotels:

While they aren’t required to extend the Ambassador benefits on points stays, they typically do for at least some of them.  I was given an upgraded room on almost the top floor. 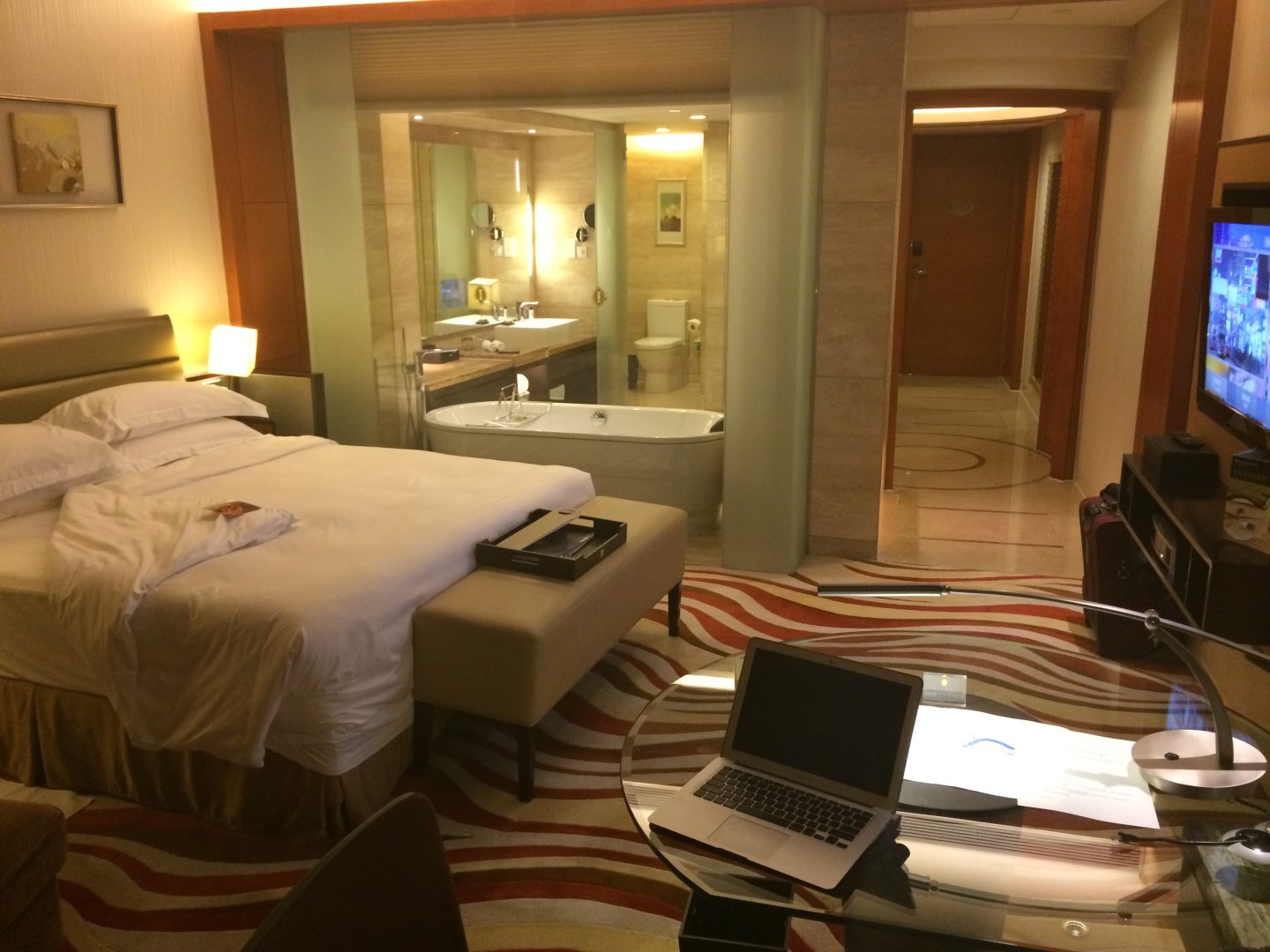 Here is a room video I made.

Not bad for completely free eh?  They had some delicious candy and fruit waiting for me as well as a bottle of wine. 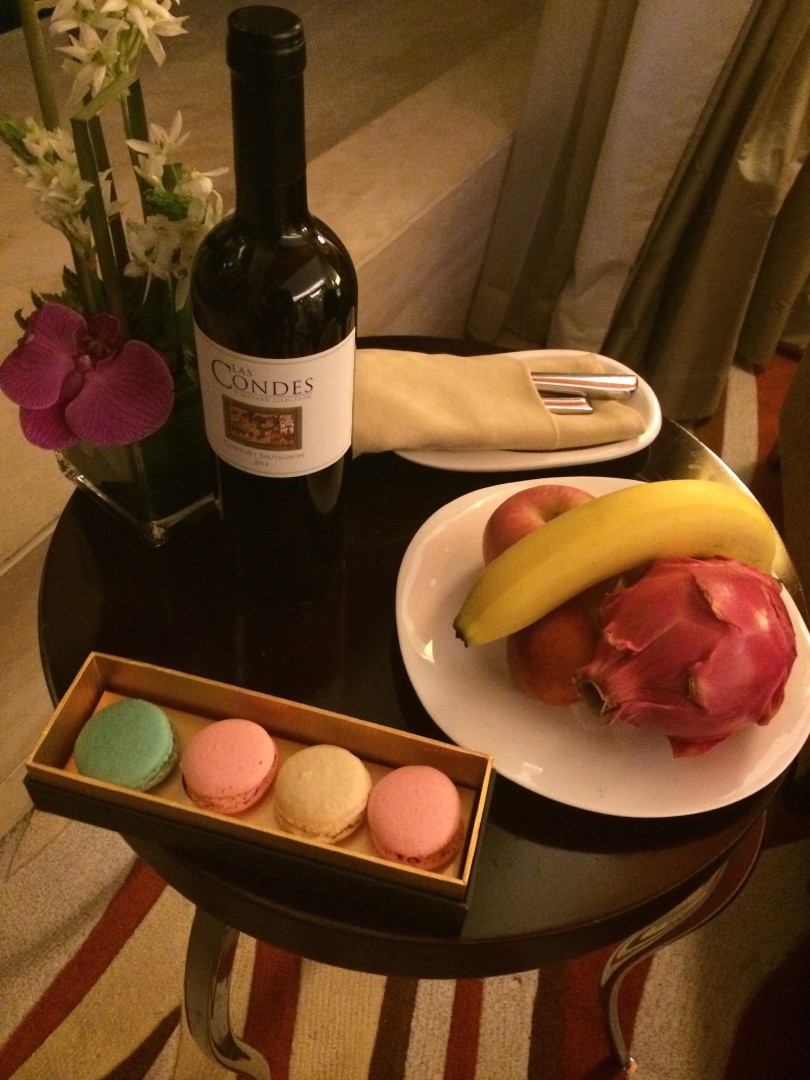 I could get used to this! It was night when I arrived, but I had to go up and check out the top floor pool and attached spa. 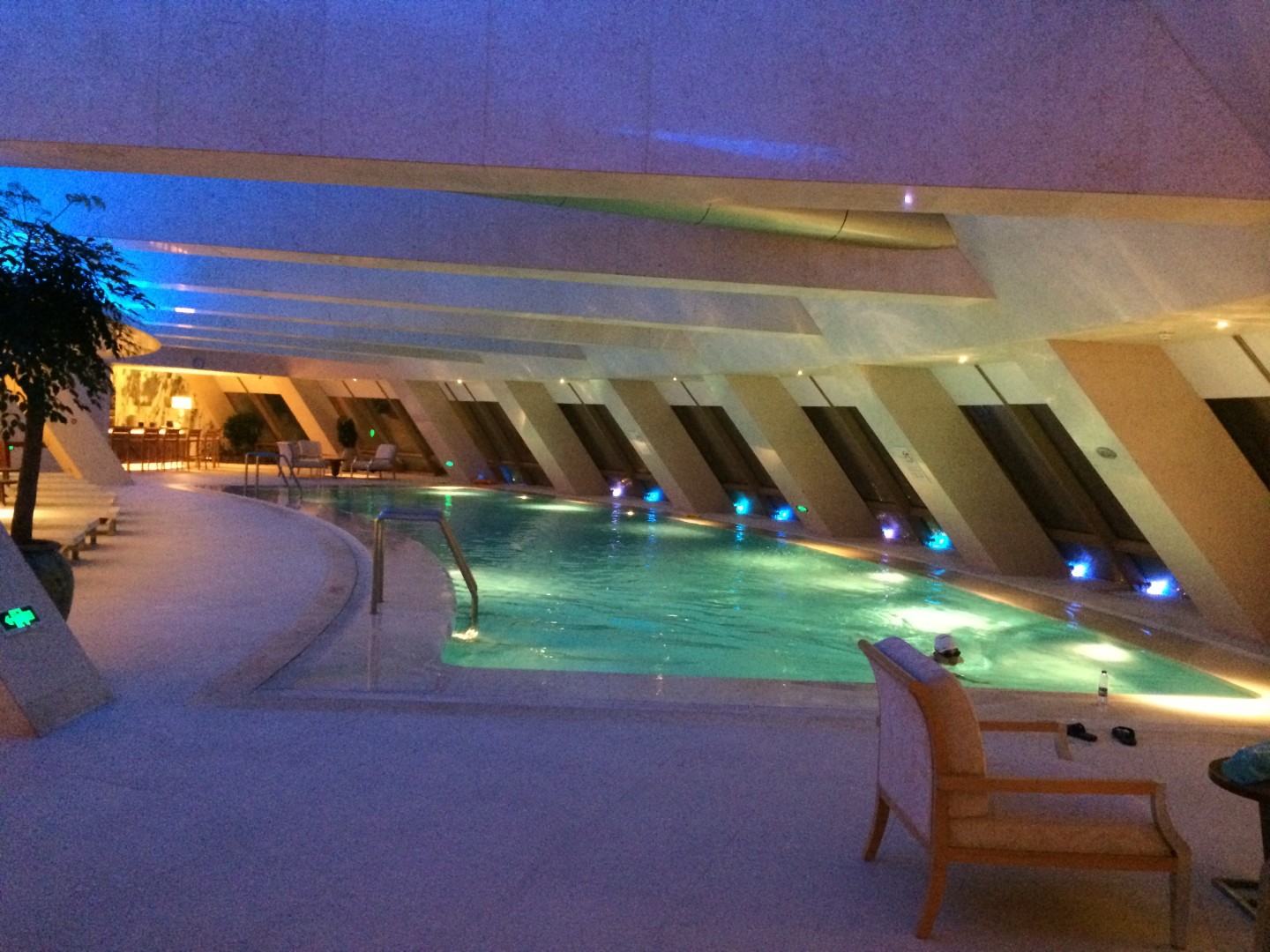 I went back up during the day and contemplated a dip but I had too much to see so no time! 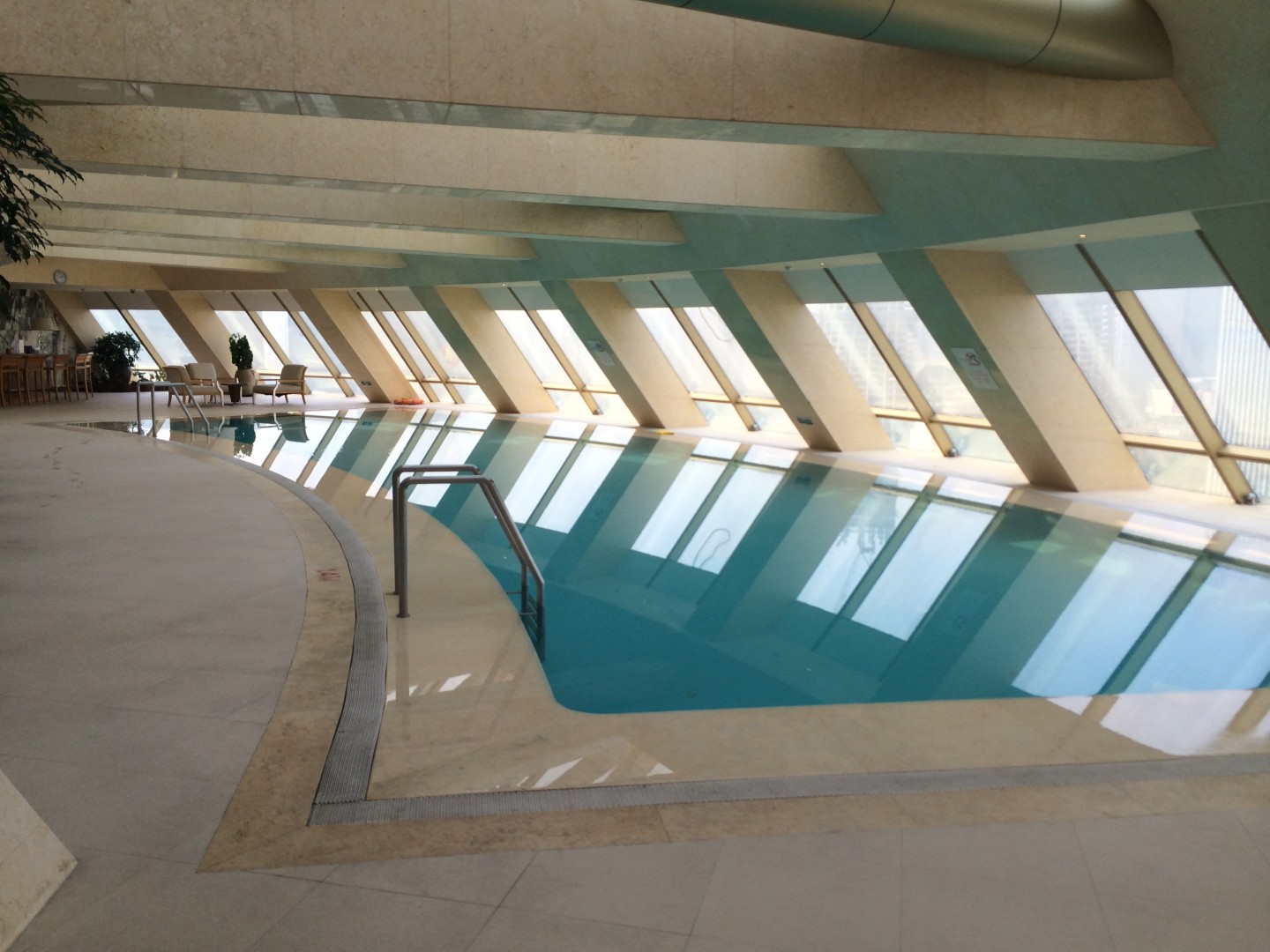 The area immediately around the hotel has some pretty incredible architecture. 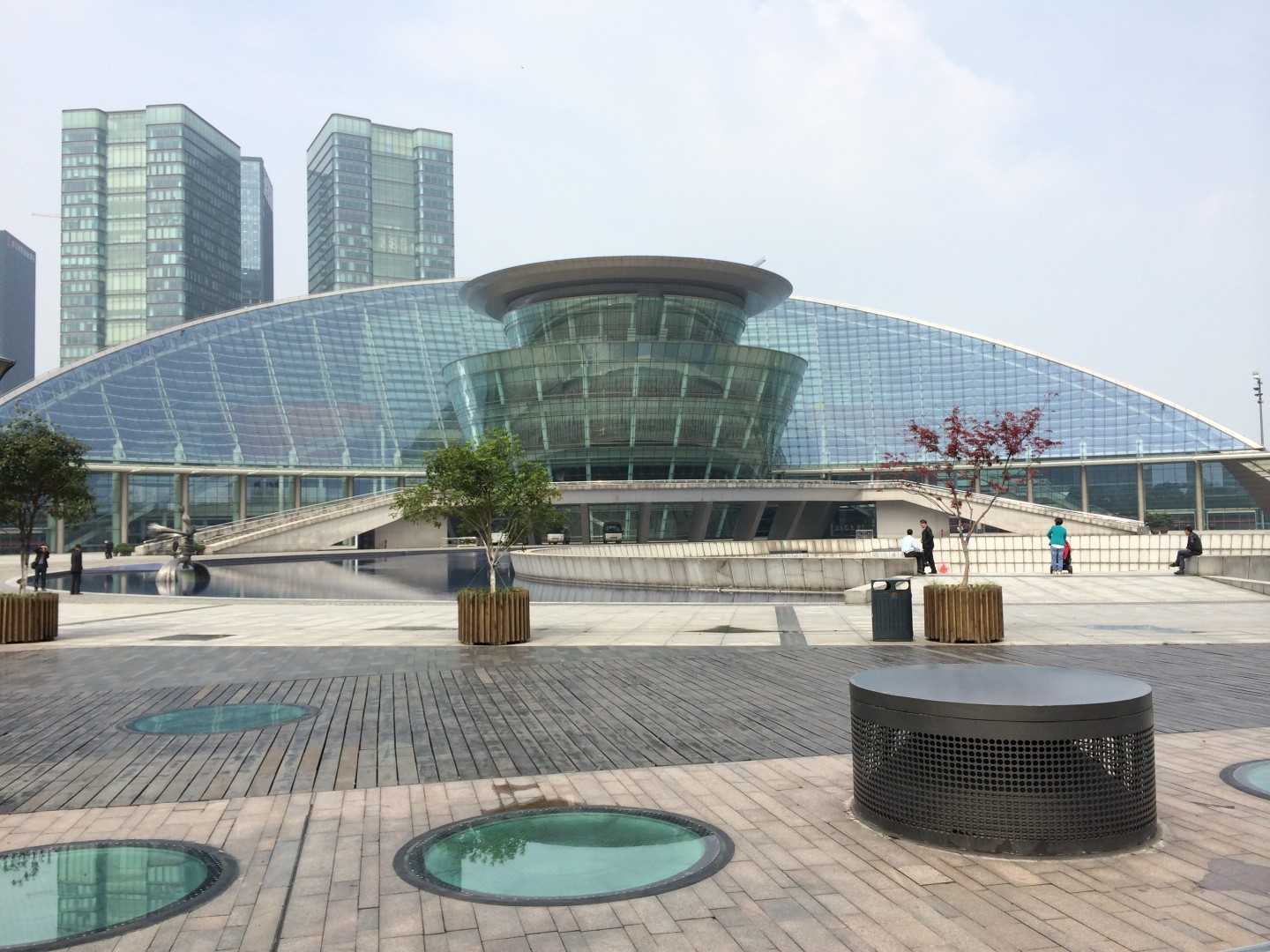 I loved these 4 buildings connected with skybridges. 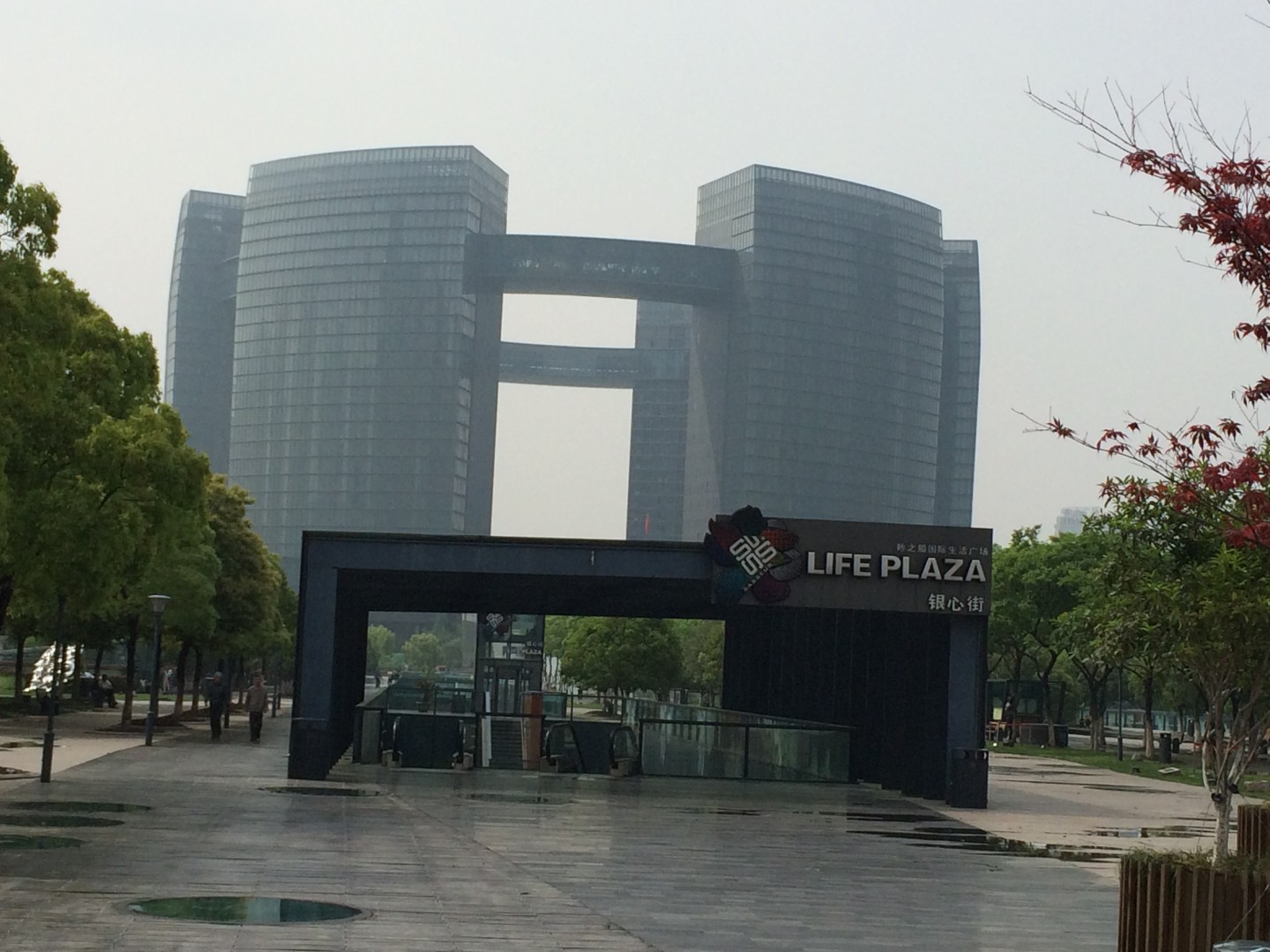 Here is a shot of me with the whole hotel area. Notice the twin skyscrapers being built behind me.  China is building everywhere! 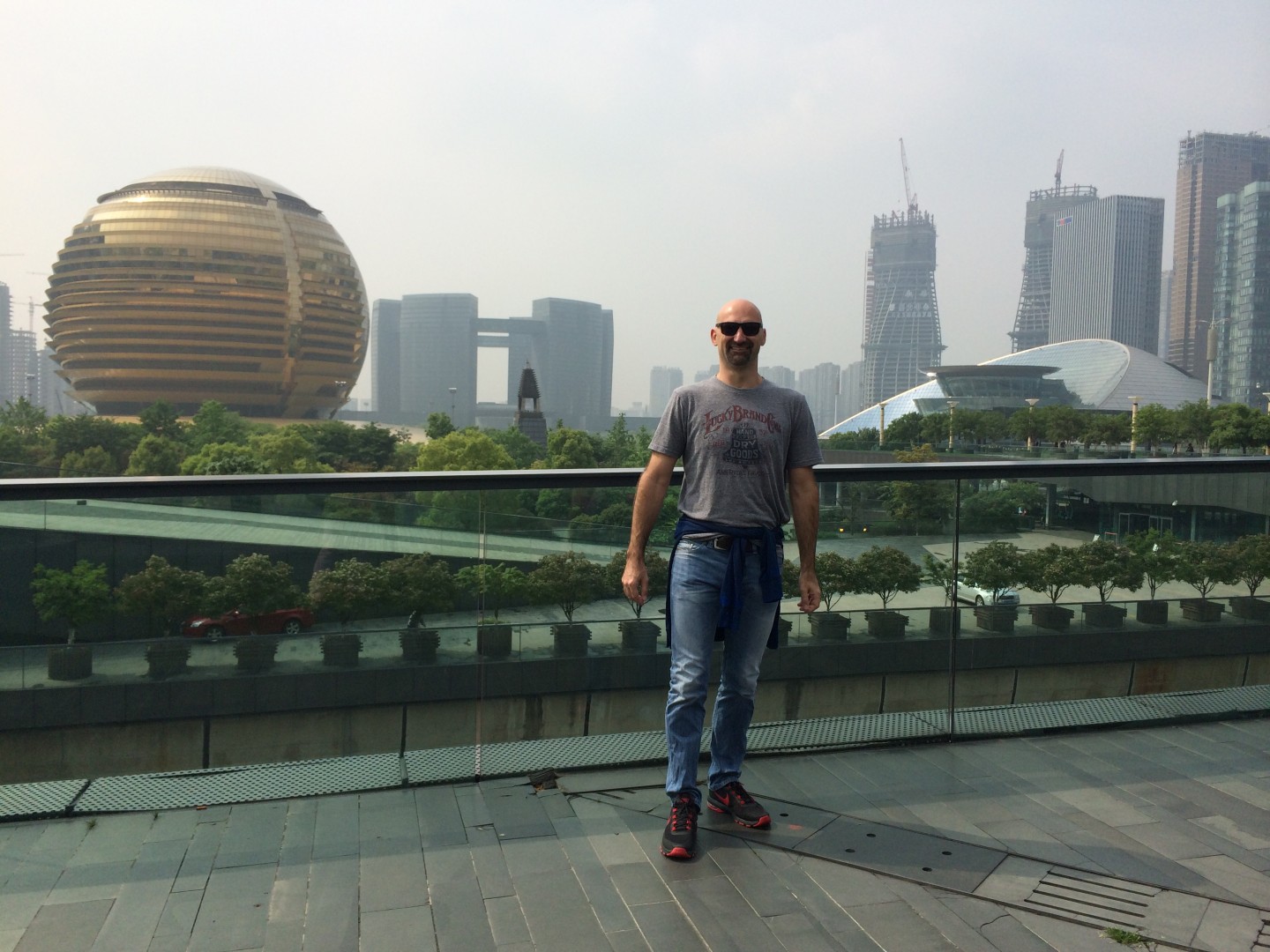 The hotel is located along the Qiantangjiang river so I took a walk along the waterfront and saw a little chinese graffiti next to a fisherman. 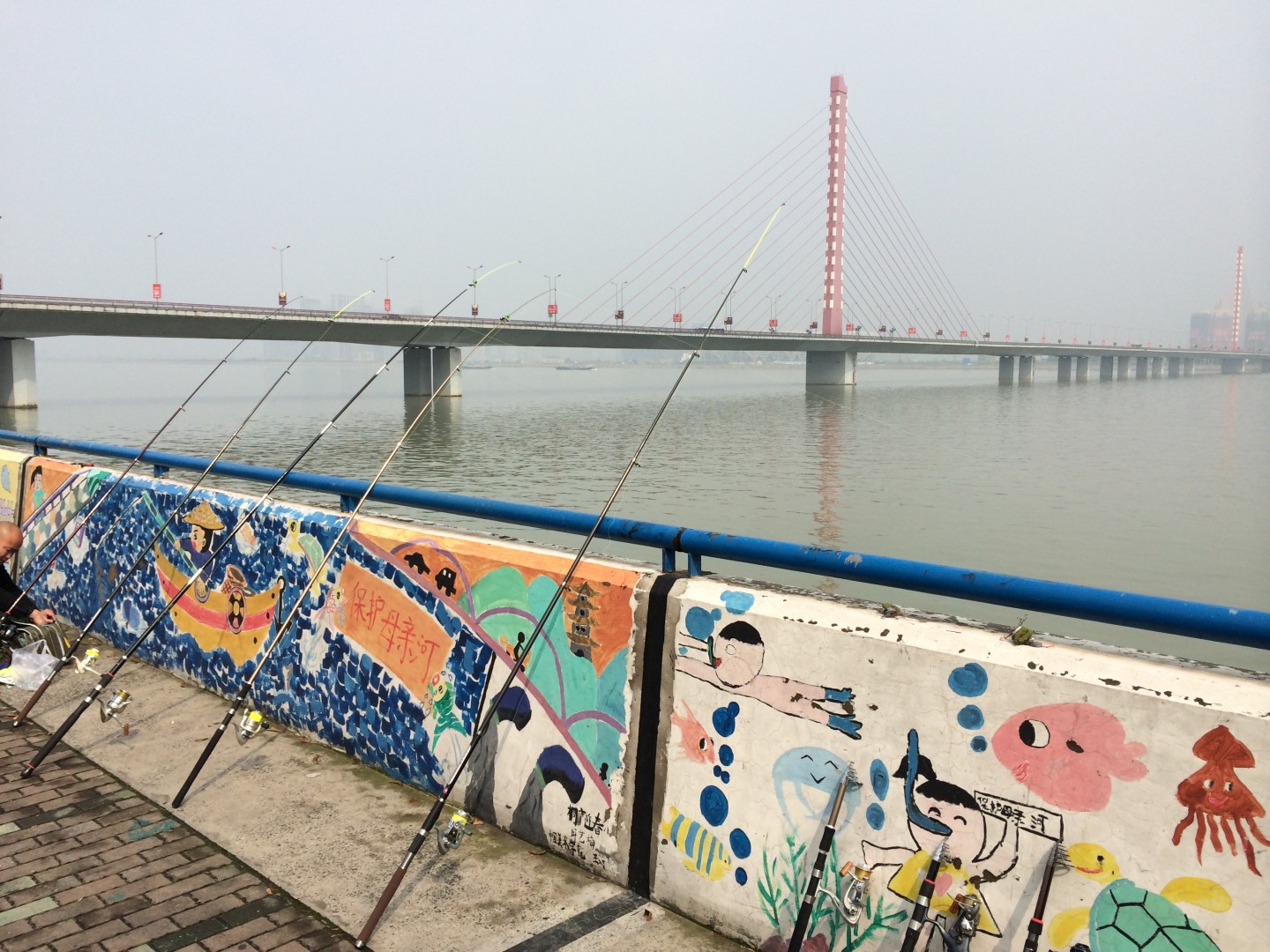 I walked up from the riverfront trying to find this famous restaurant called Grandma’s (which I ended up finding the next day and trying abalone which was great) and ran into this pretty scene along the way. 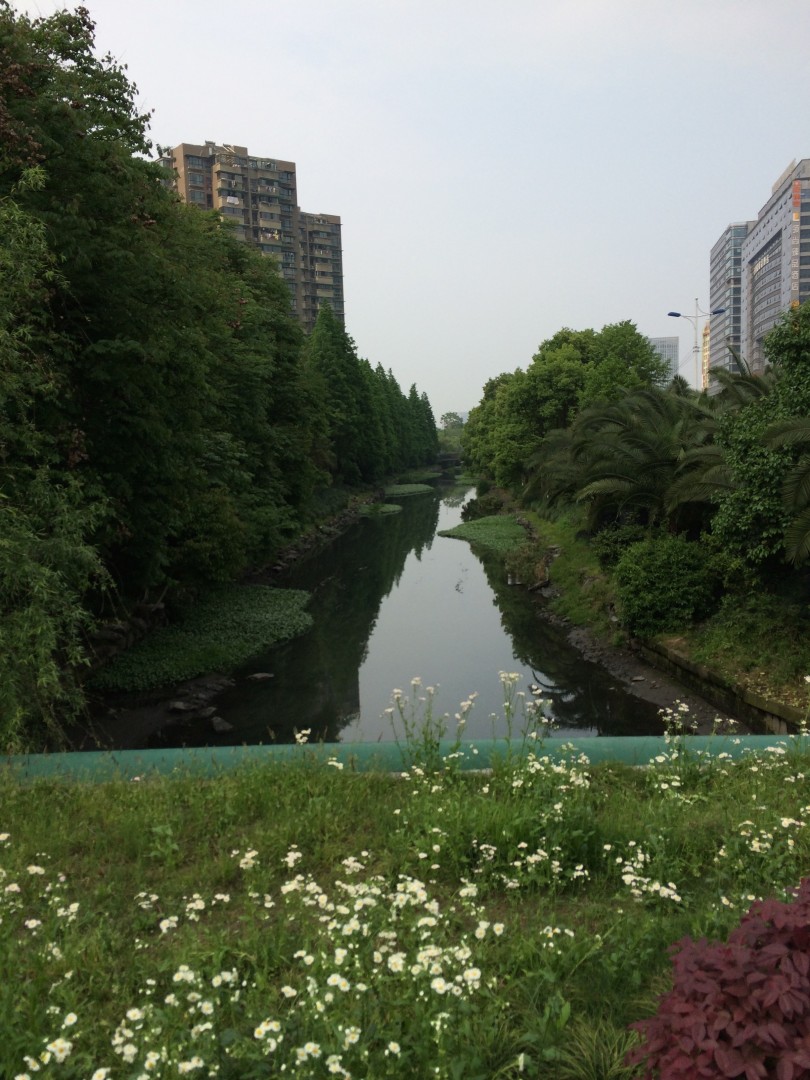 I also stumbled upon a locals market which I always love to explore. 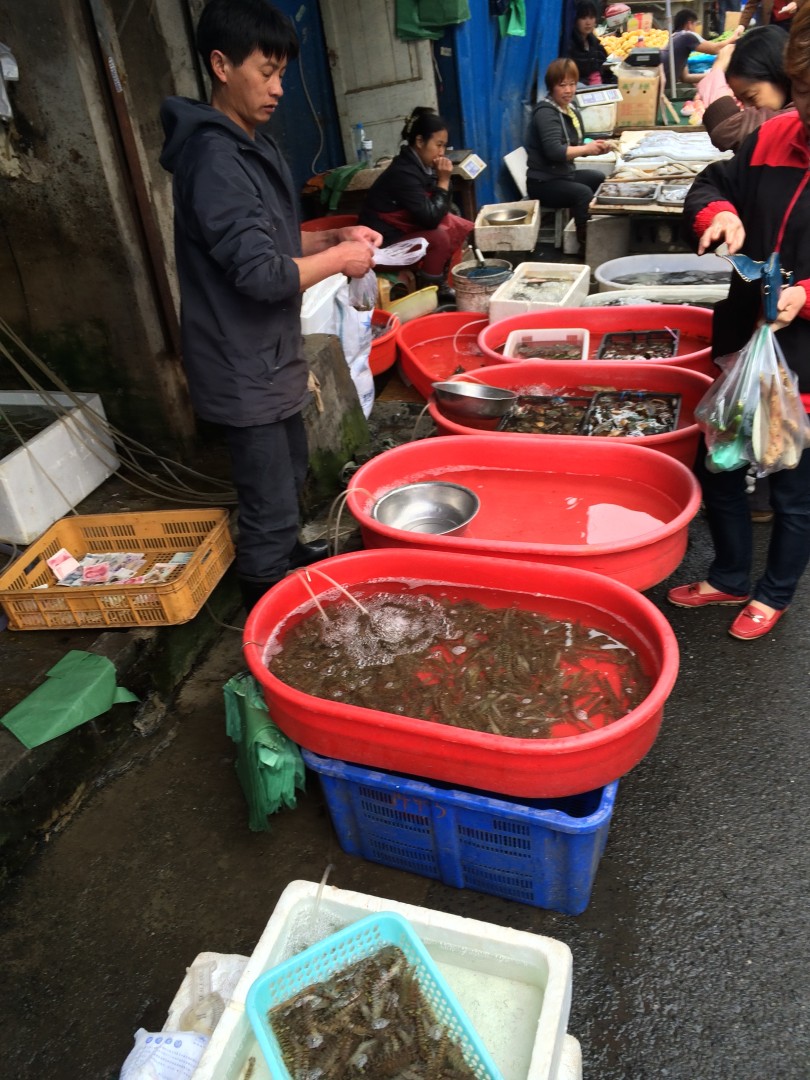 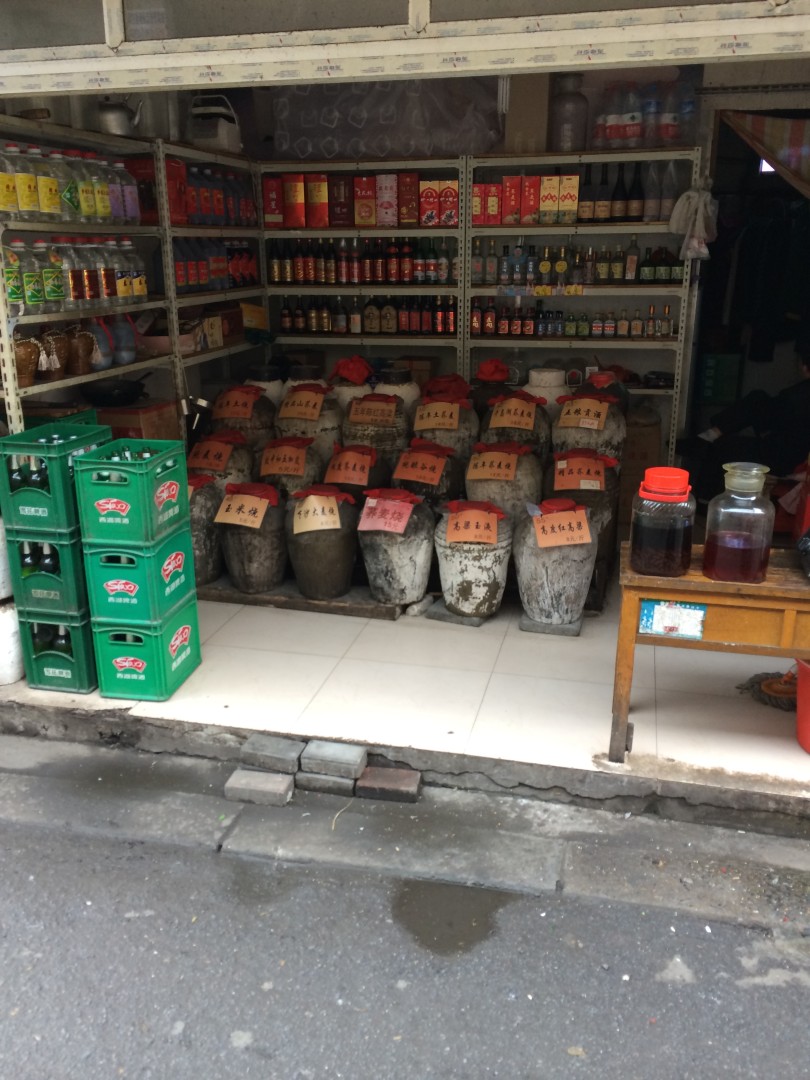 Next stop was the crown jewell of Hangzhou, West Lake. I saw this boat offering a sunset cruise for only 60 Yuan ($10) so I said why not!

West Lake was beautiful with a bunch of great views of cool bridges and pagodas. 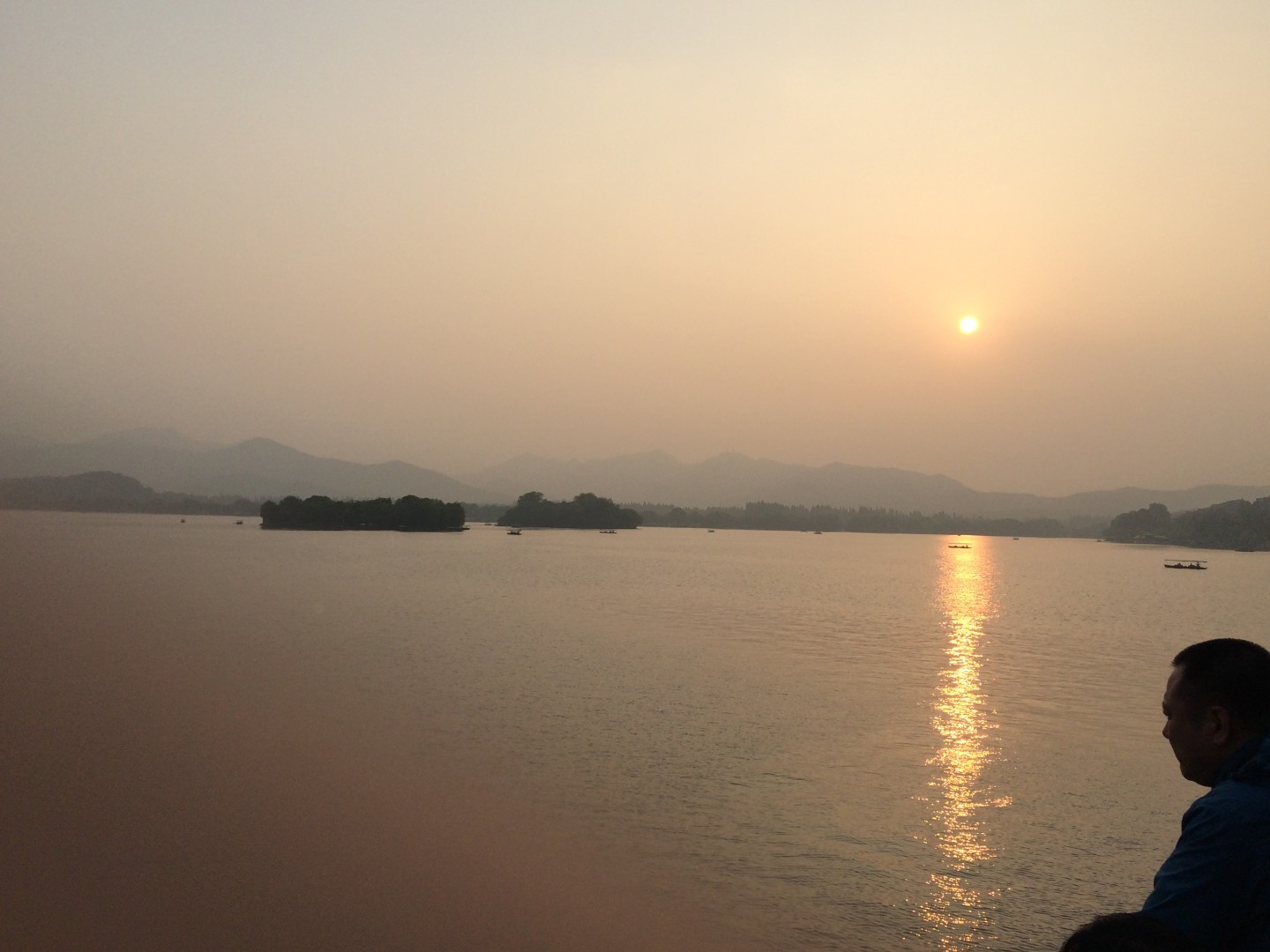 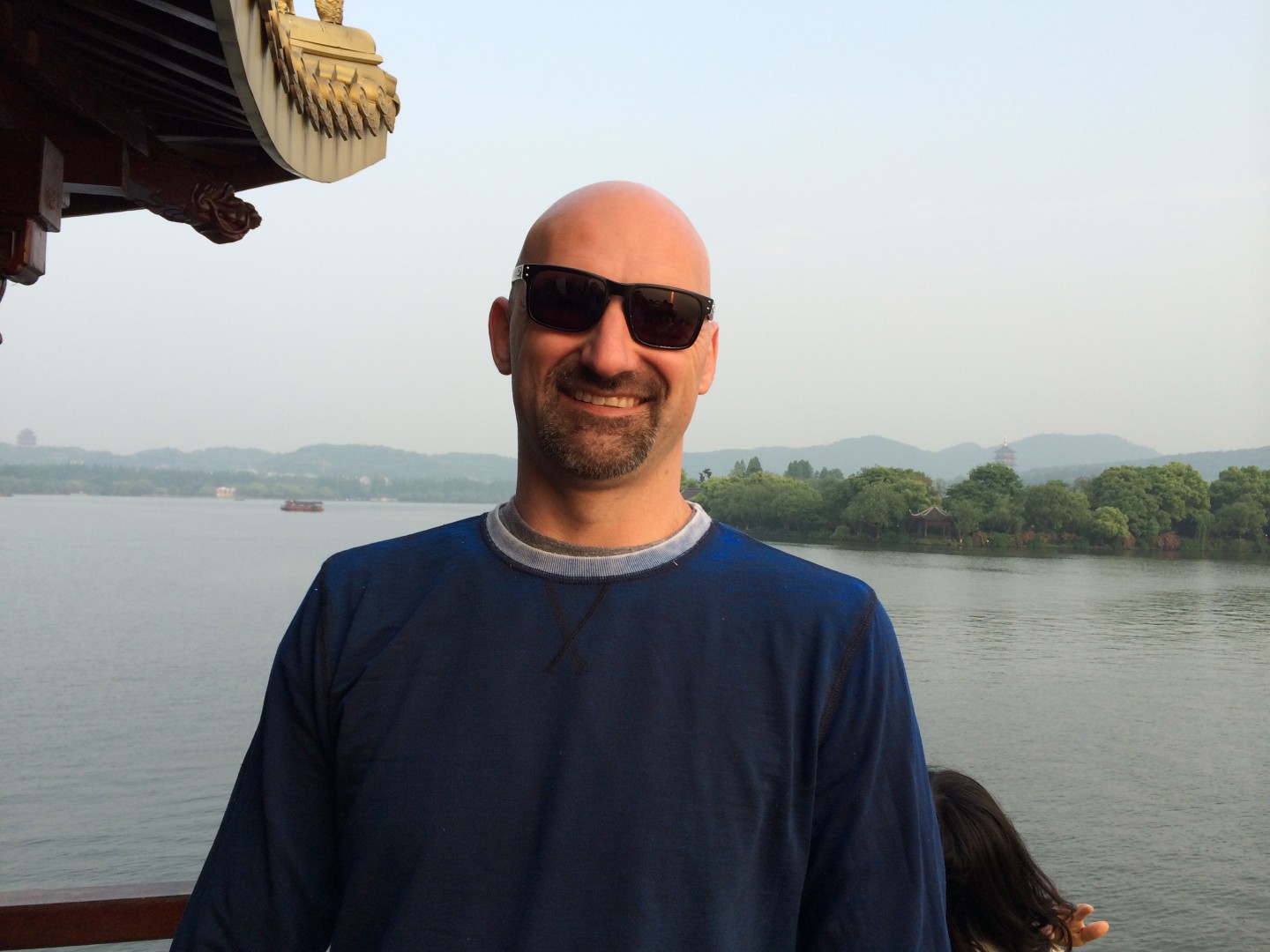 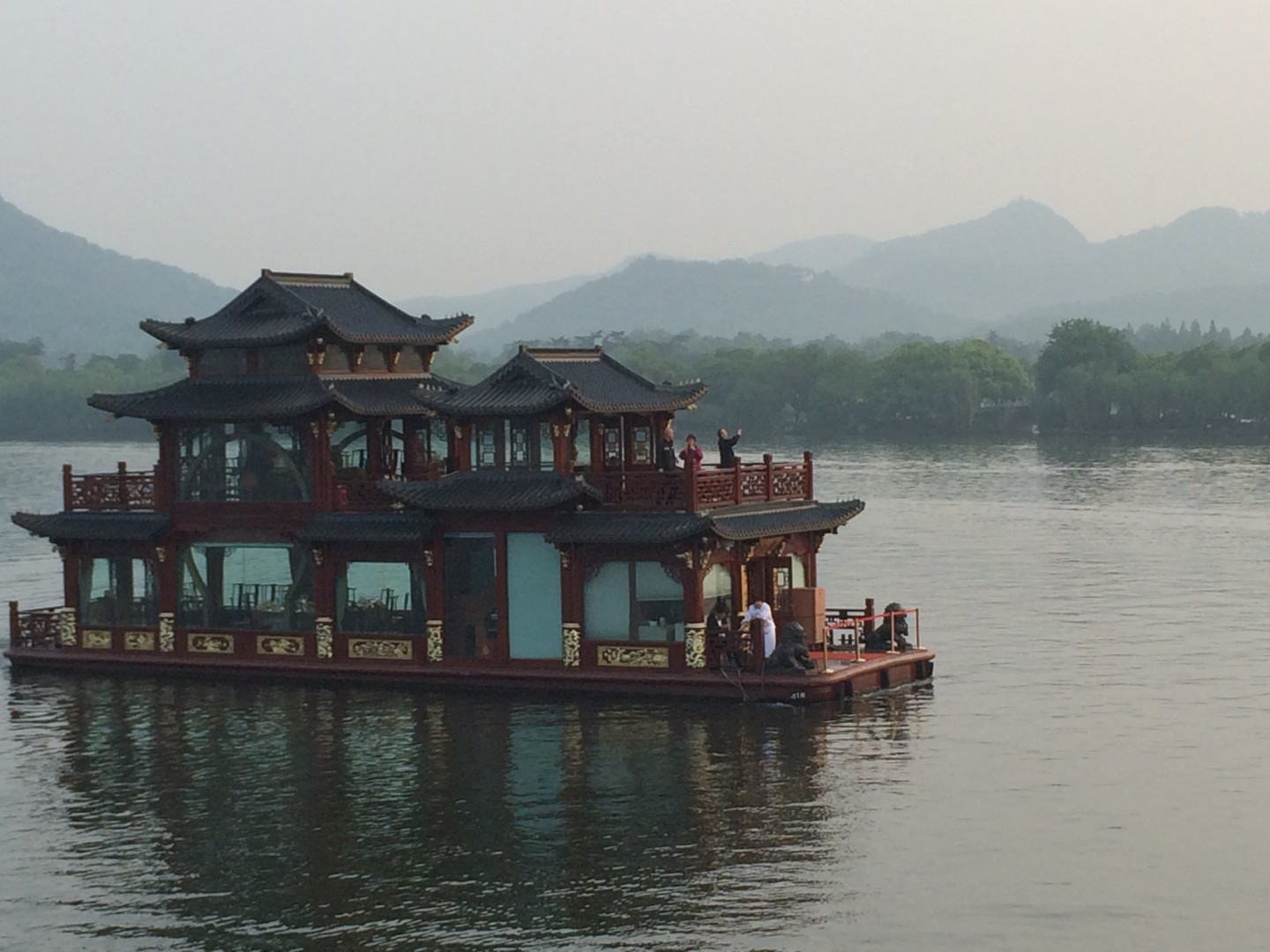 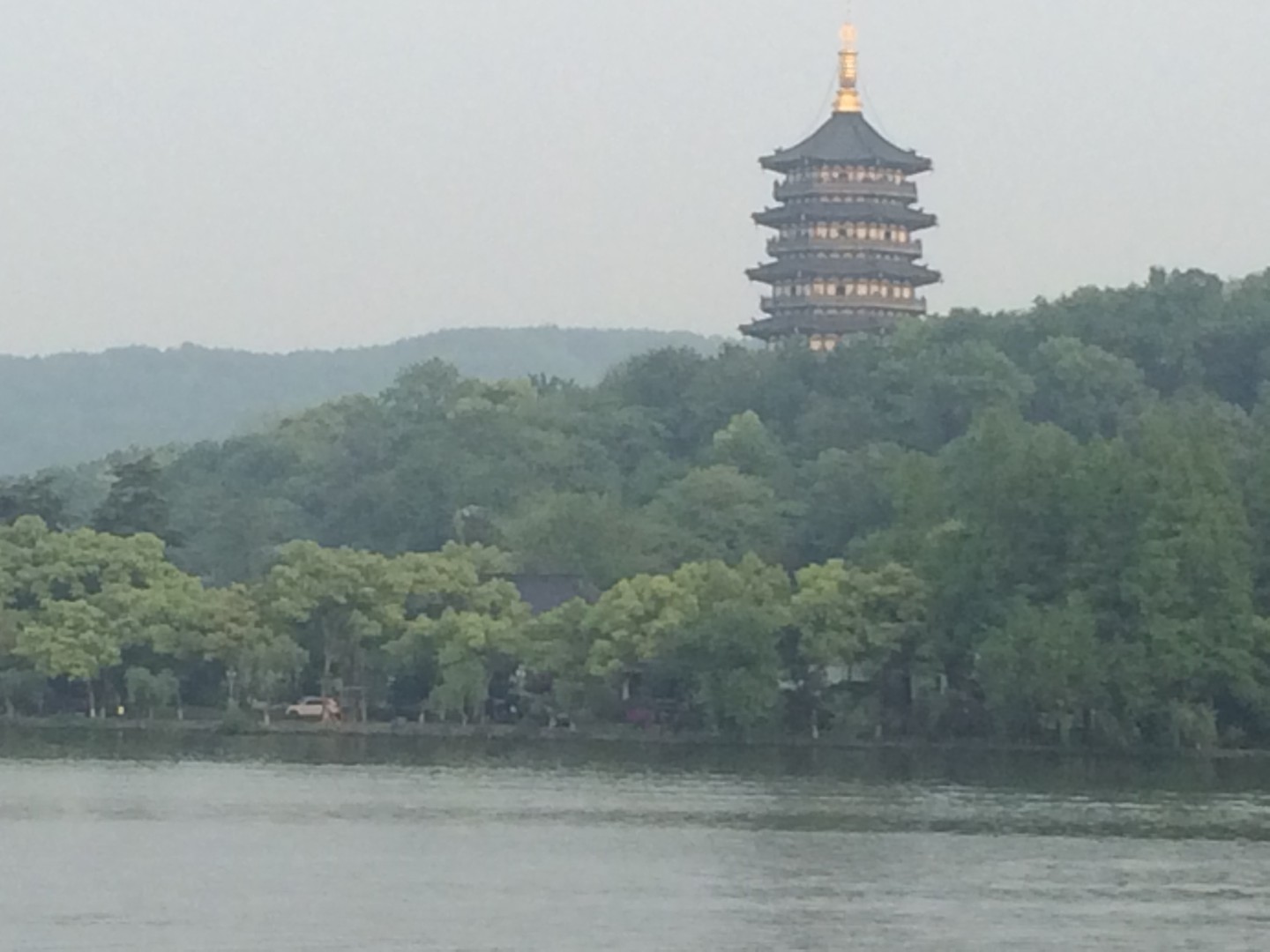 I had read that you could find good street food at Zhōngshān nánlù so I headed there for a bite.  Whoa!  What is this? 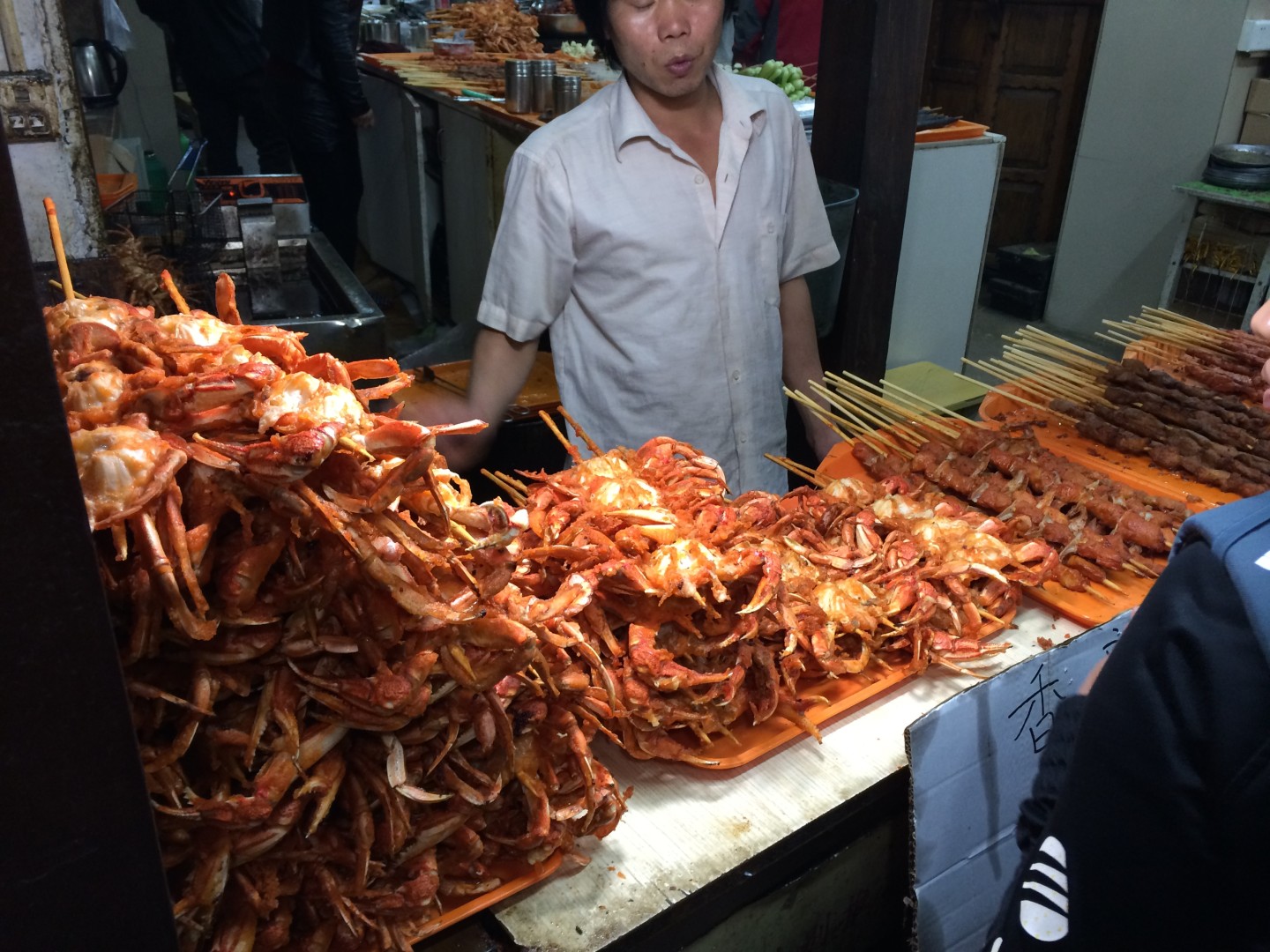 Give me one of those! Soft Shell Crab! 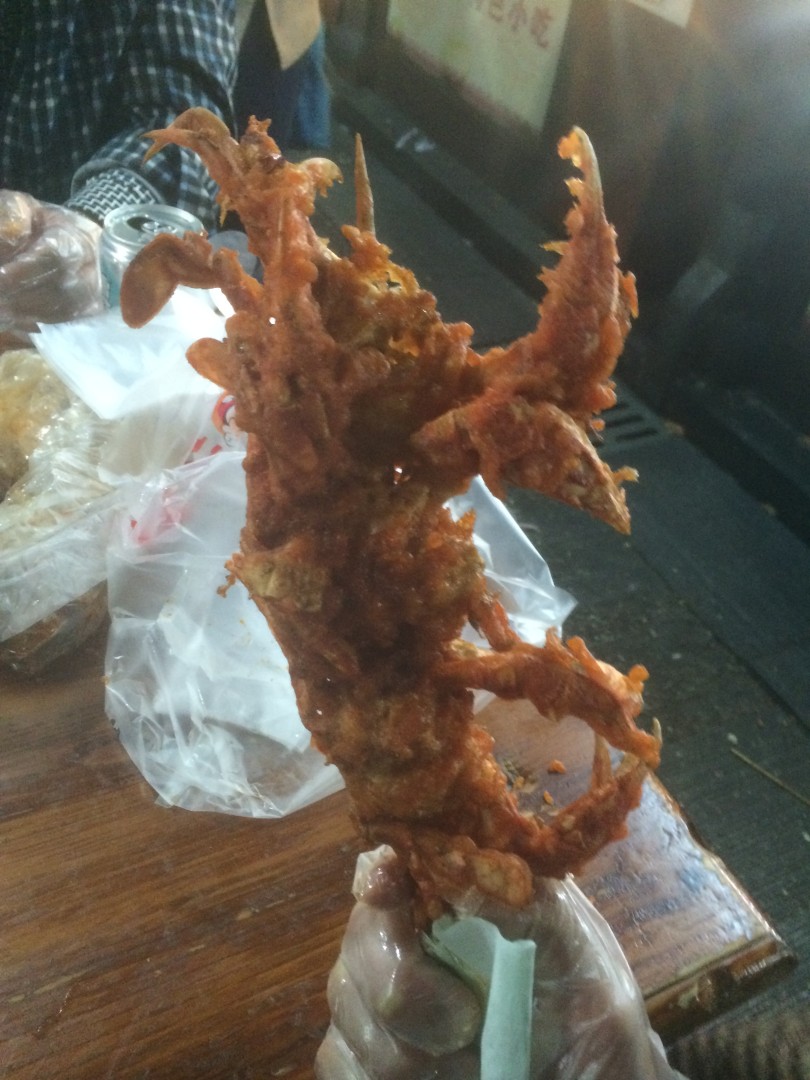 I ended up meeting some locals that I shared some beers with and via google translate had a great conversation!  As I made it back to the hotel that night, it was all lit up which looked quite cool. 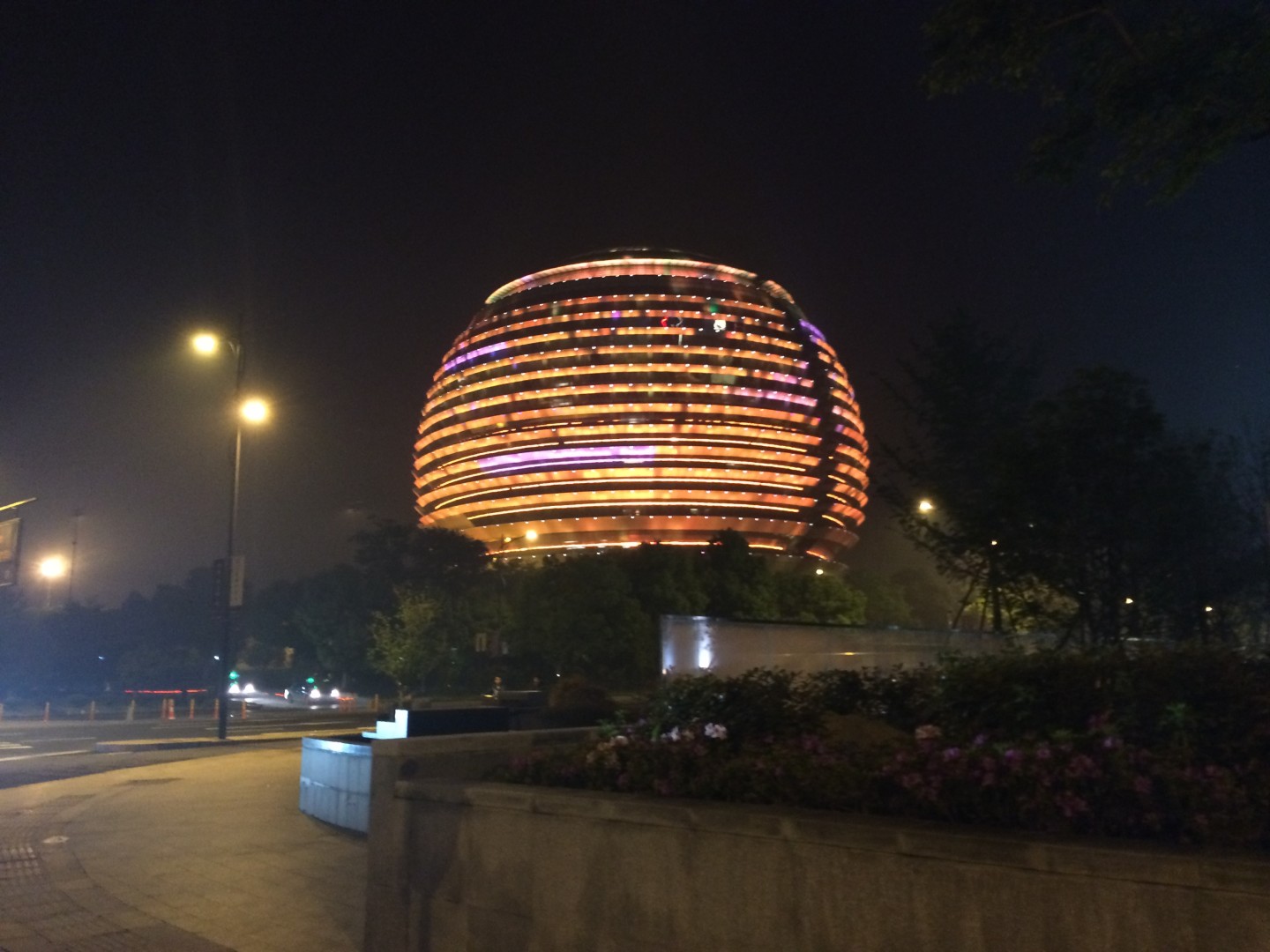 The next day I went out exploring again and randomly found this awesome park. 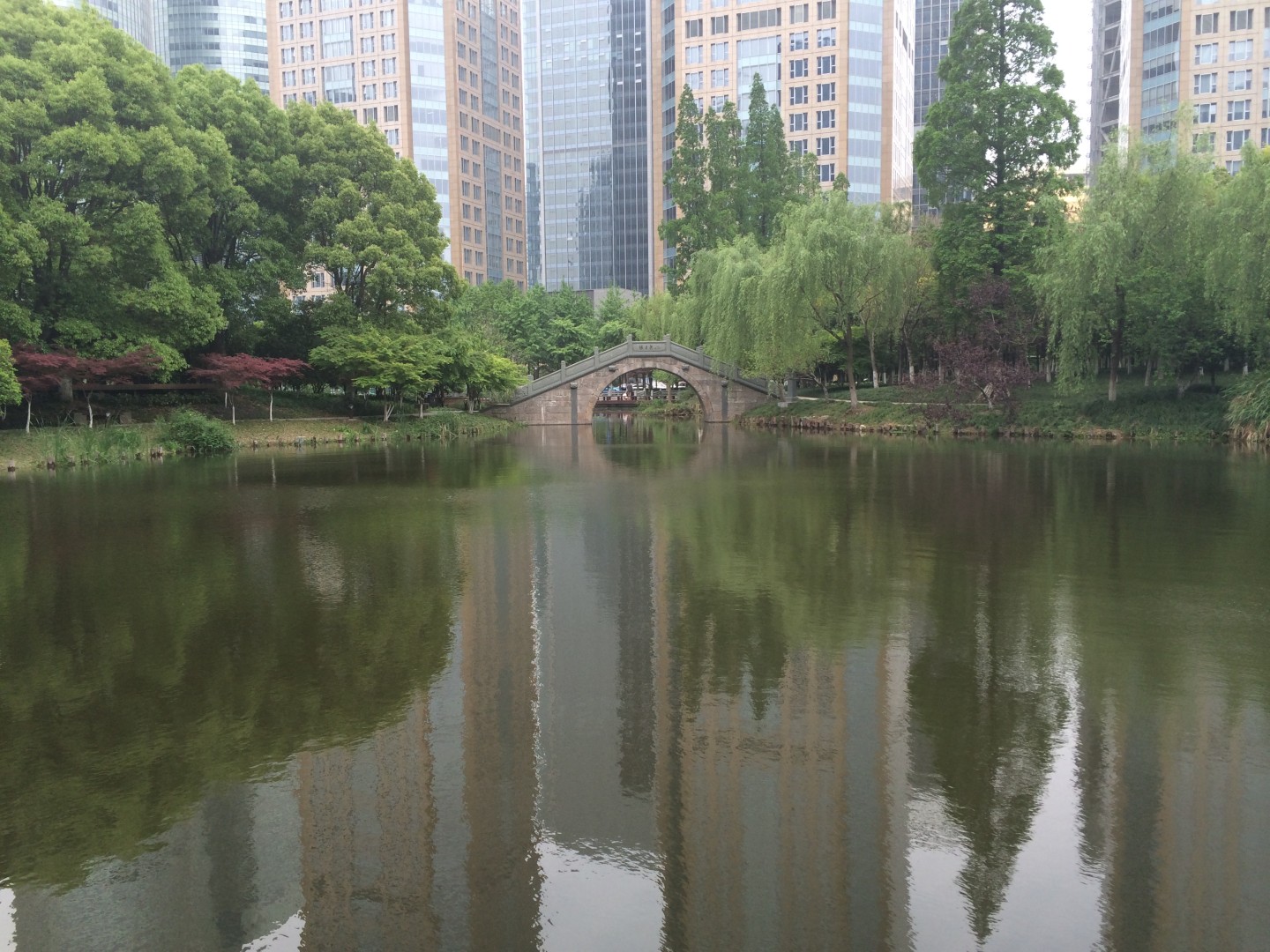 And just like that, my 3 free nights were up.  But my next stop was Shanghai so no time to waste!