Since I ended up missing my connection to Lima and onto Miami, I had the opportunity to spend about 8 hours in the Santiago airport while I was waiting for my flight.  I found out that they have not one, not two, but three different lounges for LAN Business class lounges:  One Admiral’s Club, One LAN “Naruda” VIP lounge, and one catch all Salon VIP lounge which you can get into with your Platinum Amex, Priority Pass and a bunch of other loyalty programs and alliances. I thought this information might be useful for anyone who might be considering a trip to Santiago since I feel that the lounge access is one of the hidden gems of flying business class.  You can take the stress out of the airport by arriving early for your flight and have a comfortable place to work or surf while enjoying the free food and often times top shelf liquor on offer.

I started at the Admiral Club lounge, which had a rich feel to it with dark wood panelling and was quiet as a church without the usual TV noise that many lounges have. 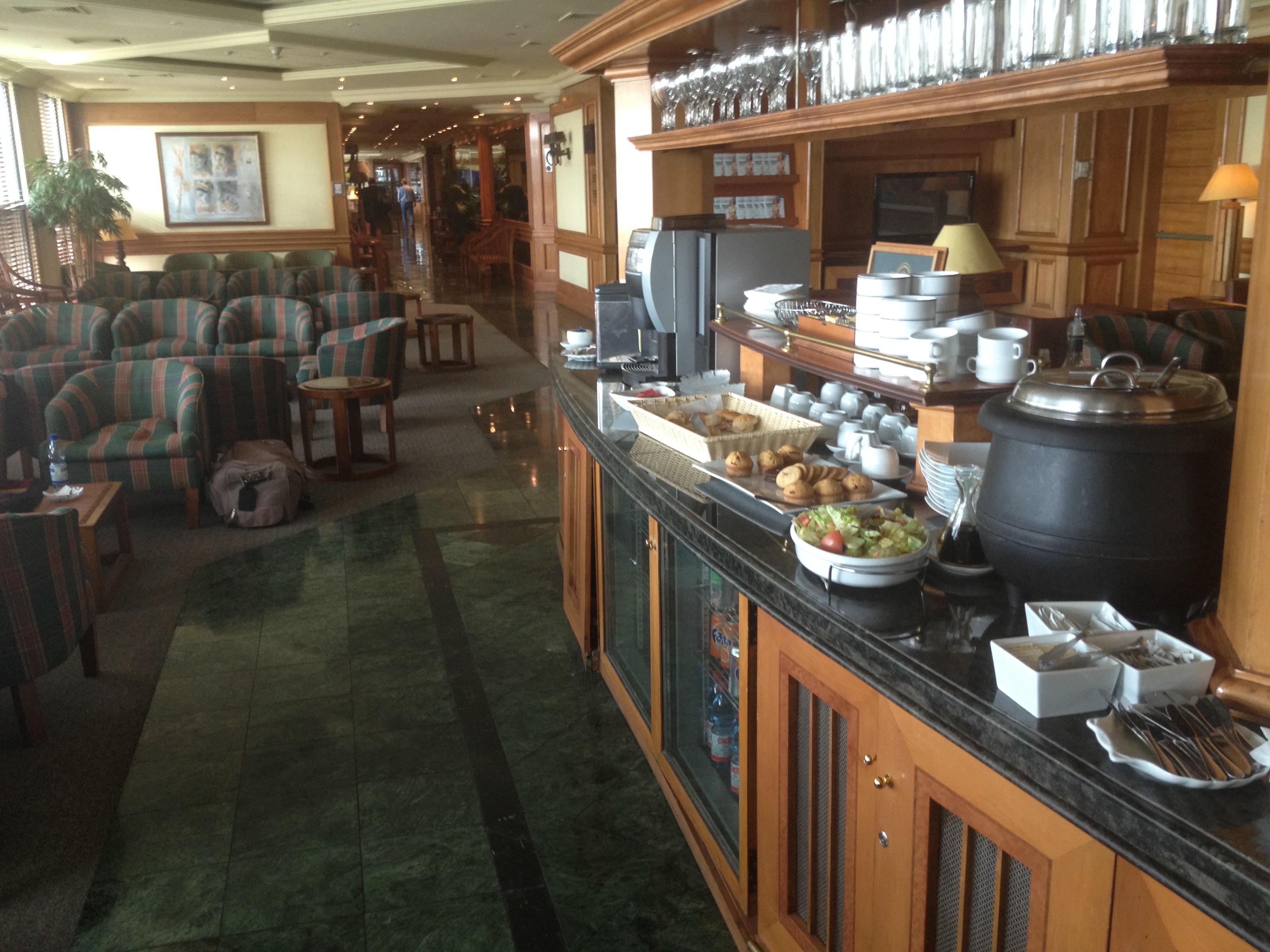 It is definitely the poshest of the three lounges with showers on offer and a nice serene environment.  I had a salad with oil and vinegar dressing and some chicken noodle soup, but I was looking for some more substantial food so I planned on checking out the other lounges to see what goodies they had.  I overheard one of the patrons raving about the wine selection and since I had just completed a wine tour the day before with copious amounts consumed, I decided not to partake.  I also connected to the wifi using the provided password and found speeds of about 700K up and 120K down, typical of a slower DSL type connection and not good for mailing off a bunch of huge pictures from Peru to my family.  When I arrived at the lounge the girls at reception assured me it was the nicest of the lounges and if you need to take a shower or want a really quiet place to work, I would tend to agree. They also had a business center on offer with internet kiosks and printers.

I then went to the LAN VIP lounge and as I checked in commented on how there was 3 lounge access with my LAN Business class ticket, they then assured me that their lounge was the nicest 🙂  The LAN lounge had a bit more modern feel to it with light wood panel walls and more contemporary furniture. 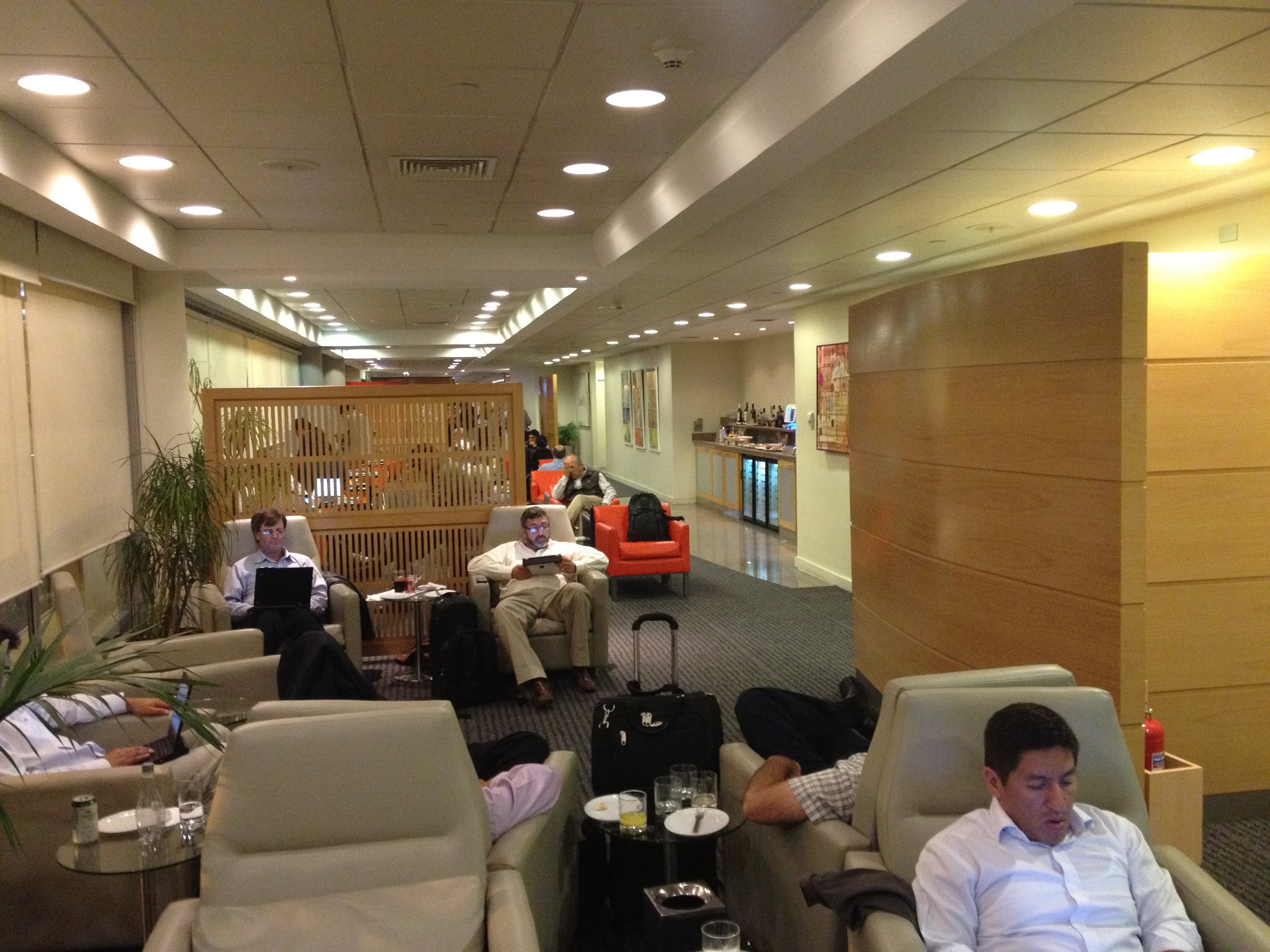 The food was much better at 4 PM when I was there with a variety of cheese and meat plates, finger sandwiches and later they brought in sushi which was a nice treat.  The most important thing to me as a travel blogger is that their internet was much faster at almost 2.5 MB upstream and down.  This allowed me to quickly send the 50 pictures to my family that they were waiting for which would have taken a long time at the other lounge. Another thing that was nice about this lounge was they had a “Rest Area” which was a separate enclosed room with dimmed lights, chaises with pillows and blankets which I took advantage of for a power nap.

The third lounge I actually only saw from the outside before I went to the LAN lounge and can tell you that it is definitely the most downmarket of the three lounges.  But since it is meant for pretty much any business class flight and you can get in many other ways such as Priority Pass and Platinum American Express this makes sense.  I saw that it had food and drinks on offer, but it just seemed a bit less impressive and I was happy enough in the LAN lounge that I never ended up checking it out.

I anticipate having an overnight in Lima before I can catch a flight back to Miami so I will probably have some time and can review the Lima lounge as well tomorrow. My trip was a short 12 days but I am honestly glad to get back home.  I will be putting up more detailed trip reports in future days but wanted to get this up since I had some time to kill while waiting for my flight.